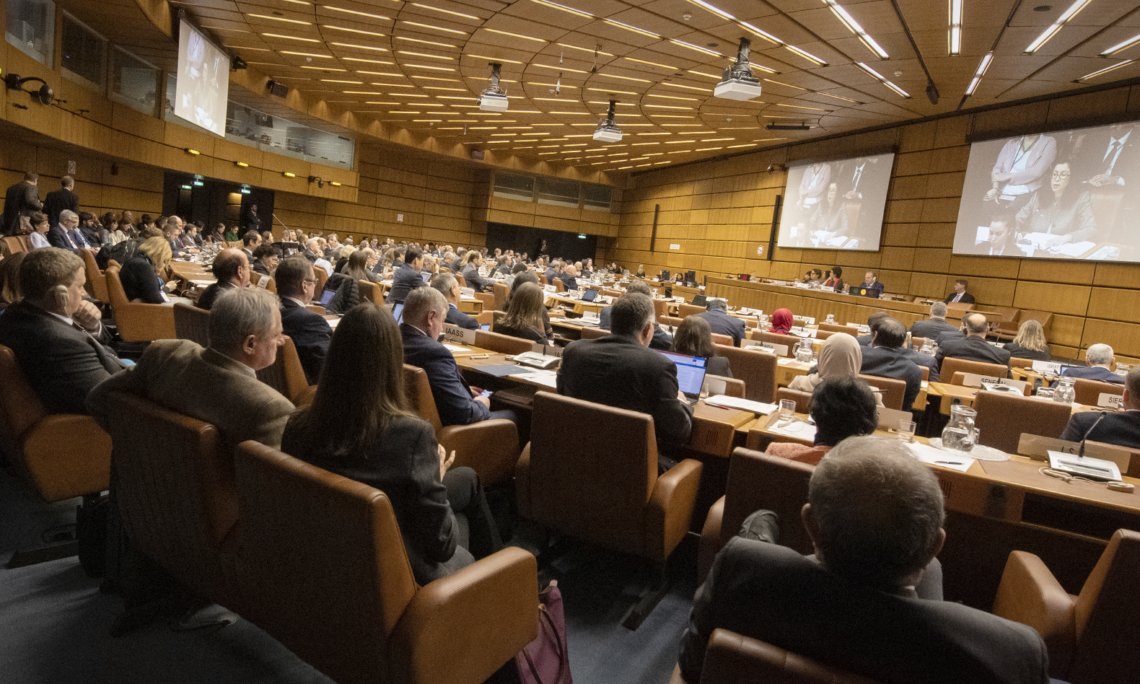 The U.S. delegation is confident that under your leadership, we will have a highly successful session, and we look forward to working with you. We commend the Director of the Office for Outer Space Affairs, the Secretariat, and the entire office, for their exceptional work. The United States appreciates the office and the Member States coming together during the last meeting of the Committee to celebrate the most historic moment in space exploration, the 50th anniversary of the Apollo 11 Moon landing. NASA used the occasion to update the Committee on the significant progress toward putting the first woman and the next man on the Moon by 2024 under the Artemis program. Through the U.S. Moon to Mars exploration approach, Artemis has gained support among members of the U.S. Congress, the aerospace industry, as well as with international partners, including Canada, Australia, Japan, and Member States of the European Space Agency. We welcome the newest COPUOS Member States: Singapore, Rwanda, and the Dominican Republic. The continually growing number of Member States is yet another reminder of the importance of space in our everyday lives.

My delegation is thrilled that after eight years of deliberations, the full Committee, at its 62nd session, adopted and the General Assembly endorsed a preamble and 21 guidelines for the long-term sustainability of outer space activities (LTS). These voluntary, non-legally binding guidelines represent best practices for the safe and responsible use of space by all nations. Madame Chair, it is important to recognize that simply because the guidelines have been adopted, the work associated with the 21 guidelines is not complete. All nations have a role to play in shaping the ongoing application of these guidelines and contributing their voices to the discussion. As with the debris guidelines, this committee has negotiated and adopted the guidelines, and now we must apply the guidelines and review the results to inform future LTS work. Because the United States understands that it is valuable to share our experiences in applying the guidelines, my delegation will discuss several key aspects of U.S. implementation at this session of the STSC in technical presentations on orbital debris mitigation, satellite servicing, and civil society contributions to LTS. We also look forward to hearing, at this and future STSC sessions, the progress other UNCOPUOS Member States have made in the practical implementation of the 21 consensus LTS guidelines. Based on those lessons learned from our ongoing implementation, we look forward to working constructively with Member States to establish a new LTS working group under this subcommittee with an associated workplan.

Madame Chair, 2019 was a juggernaut year for the U.S. space program. The work of the National Space Council and resulting Space Policy Directives signed by President Trump have brought together all elements of U.S. leadership in space. NASA’s Artemis program, with commercial and international partners, is working to explore the Moon quickly and sustainably and use what we learn there to enable humanity’s next giant leap – sending astronauts to Mars. As the Artemis program came into sharp focus last year, NASA showed what space exploration is all about, whether it was conducting the first all-woman spacewalk or developing the first flying robotic explorer to study Saturn’s moon Titan.

As directed by Space Policy Directive 1, NASA is returning the United States to the Moon. This time we will not go alone, but in a way that reflects the world today — with government, industry, and international partners in a global effort to build and test the systems needed for challenging missions to Mars and beyond. Together, we will address the great challenges of living and working in space farther from Earth, in the process creating new knowledge that benefits all of humanity and inspires the world. With its partners, NASA is leading development of the first human outpost in orbit around the Moon, known as the Gateway. This Gateway to the Moon and beyond will give us a sustainable presence in lunar space, fuel scientific discovery, propel activities with commercial and international partners to explore the Moon and its resources, and translate that experience toward human missions to Mars. The transportation system that will carry astronauts from Earth to the Gateway, and help build the structure in orbit, continues to take shape as we approach Artemis II, the first test flight of the NASA Space Launch System rocket and Orion spacecraft with astronauts aboard.

The International Space Station (or ISS) is a cornerstone of our integrated approach to deep space. The United States is dedicated to using the full potential of the station to demonstrate critical technologies, learn about human health in space, and facilitate a strong commercial market in low-Earth orbit for research, technology development, and crew and cargo transportation. The ISS remains the sole space-based proving ground and stepping stone for the Artemis program. More than 230 people from 19 countries have visited the ISS, and the ISS has hosted more than 2,500 scientific investigations from more than 100 countries. All of this would not have been possible without the contributions from 15 nations, represented by the Canadian Space Agency, the European Space Agency, the Japan Aerospace Exploration Agency, and Roscosmos, in partnership with NASA.

It has also been an exciting year for the robotic exploration of Mars. The NASA InSight lander is studying the planet’s interior, and recently captured what is likely the first audio of a quake on Mars. The NASA Curiosity rover continues its fascinating work, recently measuring seasonal methane and oxygen spikes in the Martian atmosphere. NASA’s Mars 2020 rover is planning to launch this summer, and engineers recently attached the Mars Helicopter to the rover, which will be the first aircraft to fly on another planet. NASA’s search for life in the universe was assisted by the Transiting Exoplanet Survey Satellite, which completed its first year of science, capturing a panorama of the southern sky and finding 29 confirmed planets and more than 1,000 planet candidates.

Madame Chair, the United States will continue to lead in expanding international cooperation on mutually beneficial space activities to broaden and extend the benefits of space for all humankind. In this regard, the United States is pleased with the progress of the Working Group charged with developing the “Space2030” Agenda and implementation plan. We thank the bureau of this Working Group and look forward to working together to finalize a visionary document that charts the future work of the Committee and its subcommittees, taking into account new directions that Member States are taking to explore beyond low-Earth orbit, as well as incorporating new and innovative commercial ventures.