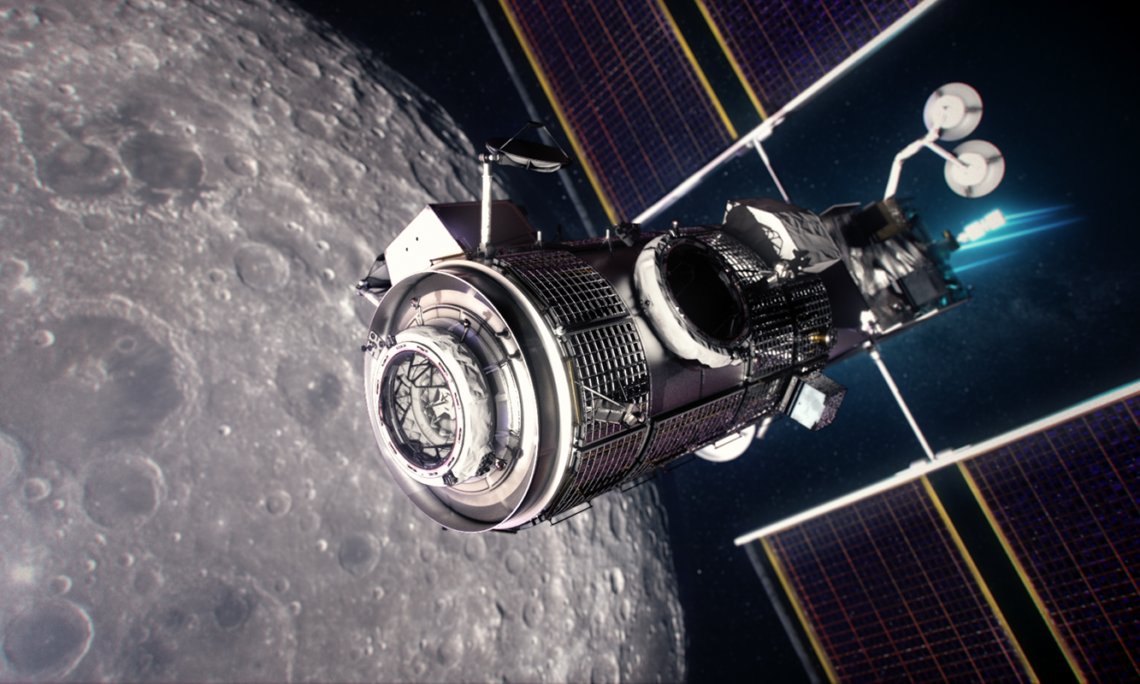 Illustration of the Gateway lunar platform orbiting the Moon. (NASA)

As prepared for delivery by U.S. Head of Delegation, Gabriel Swiney
June 1, 2021

Thank you, Madame Chair. The U.S. Delegation appreciates your steadfast leadership under these unique circumstances, and we look forward to working with you to make this a successful session. We commend the Director of the UN Office for Outer Space Affairs, the Secretariat, and the entire office, for their exceptional work throughout the difficult circumstances we have faced during the past year. Despite these challenges, 2020 was historic for the U.S. space program, both in terms of successful programs and in advancing legal and policy solutions to critical issues.

The United States appreciates our distinguished colleagues’ flexibility so that we could use this virtual format to have these important meetings. As the only standing body of the United Nations concerned exclusively with the peaceful uses of outer space, COPUOS has spent the past six decades working tirelessly to foster international cooperation to this end. As we move into the third decade of the twenty-first century, the work of COPUOS and its two subcommittees remains as important as ever.

Since this Legal Subcommittee last met in 2019, the United States has been very active in space. Because of the limits of this hybrid format, I do not have time to go into detail on these accomplishments. Our colleagues at the Scientific and Technical Subcommittee made several relevant statements, and the United States looks forward to providing additional details at the full COPUOS meeting later this year.

I will mention a few particular highlights from the past year. Ongoing programs at the International Space Station reached several milestones. NASA’s SpaceX Demo-2 test flight to the International Space Station (or ISS) was the first human space mission to launch from America since the end of the Space Shuttle program in 2011, which was followed by the first commercial crew rotational flight to the station. Last November, ISS partners marked the 20th year of humans continuously living and working aboard the ISS, with one astronaut, Christina Koch, completing a record 328-day stay on the orbital outpost – the most time spent in space on a single mission by any woman.

We are also making enormous strides beyond low Earth orbit. The Artemis Program, led by NASA, is the most ambitious space exploration program since the Apollo program. We aim to return humanity to the Moon, landing the first woman and the first person of color on the Moon within a few short years. This program is not ours alone: when the United States explores the Moon, we will be going with our international and commercial partners. Already, U.S., Canadian, European, and Japanese companies, and are hard at work to build the components of the Gateway, a habitable station that will orbit the Moon and provide long-term support for exploration of that body. With the knowledge learned from the Artemis program or from robotic and human exploration on or around the Moon and robotic exploration of Mars, the U.S. will begin a program of human Mars exploration. In 2020, the United States and NASA signed binding agreements with our Japanese, Canadian, and European Space Agency counterparts to build and operate Gateway, demonstrating that space law underpins all that we do.

As we move towards longer-term, more complicated operations on the Moon and beyond, the United States recognizes that these operations pose new legal and policy work. In an attempt to develop a common framework for these activities amongst Artemis Program partners, we developed the Artemis Accords, a non-binding set of principles that set out how we will implement our obligations under the Outer Space Treaty as we live and work together in space. These Accords, though nonbinding, supplement and support the existing space law framework. The Artemis Accords have been signed by Australia, Canada, Italy, Japan, Luxembourg, the United Arab Emirates, the United Kingdom, the United States, and Ukraine; just law week, the Republic of Korea signed the Accords, and New Zealand signed them two days ago. In December, Brazil signed a joint statement of intent to sign the Accords. The United States will be participating in a presentation later during this session on the Artemis Accords, and I hope that you will all be able to attend that event.

Closer to home, the United States has leveraged space to benefit humanity in a number of ways. On President Biden’s first day in office, he announced that the United States would rejoin the Paris Climate Accords, and he signed an Executive Order putting the climate crisis at the center of U.S. foreign policy. To that end, NASA has established a new position of senior climate advisor and named Dr. Gavin Schmidt to serve in the role in an acting capacity. We are also drawing on the resources of our National Oceanographic and Atmospheric Agency, NOAA, as well as the U.S. Geological Survey, to provide detailed information on our climate, which we make freely available to the world.

Madame Chair, in December, NASA signed a Memorandum of Understanding with UNOOSA aimed at enhancing and expanding their longstanding partnership to advance international civil space cooperation, such as through the UN Access to Space for All initiative, and to work more closely to improve the awareness and understanding of the global benefits from the civil and commercial uses of space. The United States will continue to lead in expanding international space cooperation to broaden the benefits of space for all humankind.

We have many important topics before us this session of the Legal Subcommittee, and the United States looks forward to working with all Member States and observers to make this session a success. One note for our fellow Members; in deference to the unique format and limited time available during this session, the United States delegation will refrain from making statements on a number of agenda items. Please understand that this does not reflect anything about the importance of those topics, and is purely a response to this unique working method.

Madam Chair, we look forward to completing the Space2030 Agenda during this session, and would like to thank the tireless work of the chairs for pushing this important issue forward. The Space2030 Agenda sets an ambitious tone for space exploration and international cooperation in the years to come, and we encourage all delegations to put politics and domestic talking points aside to work constructively in finishing this visionary work.

I will end with this: as we work together here at COPUOS, the United States will continue to be guided by the same principles that guide our work in outer space: transparency, practicality, belief in the rule of law, and the firm belief that when we work together to achieve great things in space, those successes benefit all of humanity.