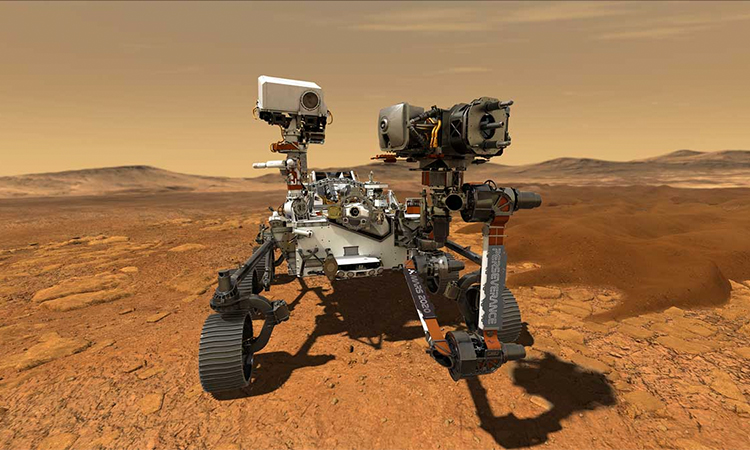 The Mars 2020 Perseverance Rover successfully landed on the Red Planet in February 2021.

I regret that we were prevented by technical problems from joining earlier, and the United States would like to join the other member states that objected to the DPRK’s participation.

In this respect, we appreciate your leadership under these difficult circumstances. We also thank the Director of the Office for Outer Space Affairs and the Secretariat for their exceptional work throughout the past year. Despite these challenges, 2020 was a historic year for the U.S. space program. As the initial impacts of the pandemic were being felt across the globe, the U.S. civil and commercial space sectors developed innovative medical technologies and supported the expanded use of telemedicine.

In addition, we appreciate Member States’ flexibility to allow this virtual format for these important meetings. The United States is pleased that the Committee in 2019 adopted a preamble and 21 guidelines for the long-term sustainability of outer space activities (LTS), which were subsequently endorsed by the General Assembly. These voluntary, non-legally binding guidelines represent best practices for the safe and responsible use of space by an increasing number of governmental and private sector actors. Madame Chair, it is important to recognize that simply because the guidelines have been adopted, the work associated with the guidelines is not complete. All nations have a role to play in building and sustaining capacity to ensure implementation of the 21 guidelines. The United States looks forward to working constructively with Member States to continue implementing the guidelines and to start productive engagement in the LTS 2.0 Working Group.

Madame Chair, 2020 was a landmark year for humans in space. The Crew Dragon Demo-2 test flight to the International Space Station (or ISS) in May was the first human space mission to launch from the United States since the end of the Space Shuttle program in 2011. The test flight was followed by the first commercial crew rotational flight to the station in November. November also marked the 20th year of humans continuously occupied the ISS, with one astronaut, Christina Koch, completing a record 328-day stay – the most time spent in space on a single mission by any woman. Just a few days ago, we welcomed Kate Rubins and her crewmates back to Earth after they successfully concluded their six-month mission on station. In December, NASA selected 18 astronauts from more than 12,000 applications for the next class of Artemis Generation candidates. The ISS remains the sole space-based proving ground and stepping-stone for the Artemis program.

Earlier this month, President Biden expressed support for NASA’s Artemis program, which will keep the agency and our commercial and international partners on the path to send the first woman and first person of color to the Moon sustainably to use what we learn there to enable humanity’s next giant leap – sending astronauts to Mars. The Artemis Accords establish a common framework to guide space exploration cooperation among nations participating in the Artemis program and have been signed by nine Member States.

On his first day in office, President Biden announced that the United States would rejoin the Paris Climate Accords, and he put the climate crisis at the center of U.S. foreign policy. Accordingly, NASA has selected Dr. Gavin Schmidt to serve in a new position of senior climate advisor, and he will provide a presentation to the subcommittee next week.

Since the subcommittee last met, we successfully landed the Mars 2020 mission, with its Perseverance rover and Ingenuity helicopter, on the Red Planet. We are proud to inform the subcommittee that earlier today Ingenuity performed the first successful flight, the first of a powered aircraft on another planet. NASA teamed with the European Space Agency on the Solar Orbiter mission that will provide the first-ever images of the Sun’s poles, and unique insight into how the Sun affects the space environment. And we celebrated 30 years of NASA’s Hubble Space Telescope, which continues to enhance our understanding of the cosmos.

Madame Chair, since the dawn of the space age, the United States has used satellites to understand our home planet more fully, improve lives, and safeguard our future. The United States makes its Earth observations freely and openly available. In this regard, the U.S. National Oceanic and Atmospheric Administration (or NOAA) satellites, together with partners in Europe, Japan and Korea provide decision makers around the world with access to high-resolution observations critical for improved weather predictions and environmental monitoring.

The U.S. Geological Survey (USGS) continues to operate Landsat 7 and 8 satellites. USGS and NASA are planning to launch Landsat 9 later this year. All of the approximately 9.5 million unique Landsat scenes are freely available to users worldwide, with nearly 70 percent of these archived scenes directly attributable to our international partnerships.

Madame Chair, in December, NASA signed a Memorandum of Understanding with UNOOSA to enhance and expand our longstanding partnership to advance international civil space cooperation. Our colleague from France just mentioned collaboration on Perseverance, and the United States will continue to strengthen international space cooperation to broaden the benefits of space for all humankind. In this regard, we thank the Member States and observers of this subcommittee and we look forward to continuing our work to explore and use space to improve life for everyone.