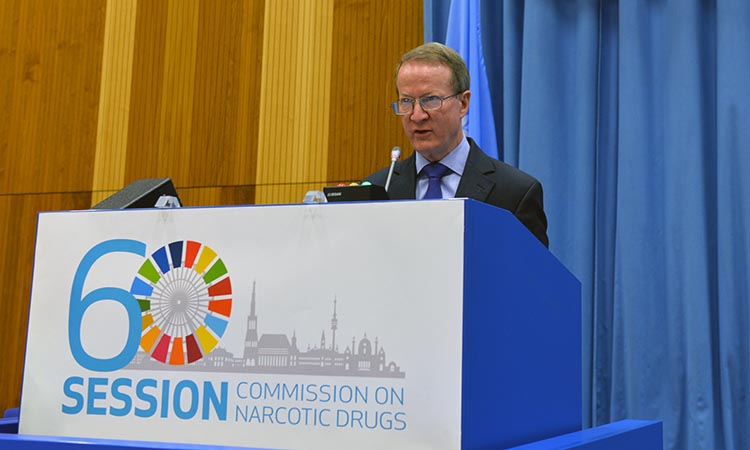 60th Session of the Commission on Narcotic Drugs (CND)

Thank you, Madam Chairwoman, members of the Commission, ladies and gentlemen.  And a special thank you as well to the Secretariat for your tremendous work in supporting preparations for this conference.

At the first meeting of the Commission since last year’s landmark United Nations General Assembly Special Session on the World Drug Problem (UNGASS), I reiterate the commitments we made there and urge that we focus on implementing them.  We recognize the need for comprehensive, balanced approaches to drug policy and seek to advance the implementation of the UNGASS outcomes while re-affirming this Commission’s primary role in international drug control matters.  The 2009 Political Declaration called for a review, and that is what we accomplished at the 2016 UNGASS.  So our focus here and for 2019 needs to be on the practical implementation of more than 100 recommendations agreed to at UNGASS.

My government is acutely focused on advancing implementation of the UNGASS outcome document through practical and operational measures to address the challenges related to the world drug problem.  One of the most serious is the ongoing opioid crisis impacting our communities.

According to the most recent data from our Centers for Disease Control and Prevention, in the United States alone, more than 33,000 people died from overdoses involving prescription or illicit opioids in 2015.  Of these 33,000, 60 percent – or nearly 20,000 overdose deaths – involved heroin or synthetic opioids, including fentanyl.  The presence of fentanyl in toxicology screenings, in fact, is so difficult to detect that we fear these numbers are actually an underestimation. The reality for us is that drug overdose has exceeded any other form of injury-related death, including traffic accidents.  This dramatic increase in drug overdose fatalities is not simply a U.S. problem: according to the 2016 report from the International Narcotics Control Board (INCB), the overdose situation in other countries has reached “crisis levels.”

One way we can curb this trend is to increase regulations on the two most prevalent precursor chemicals used to produce illicit fentanyl, ANPP and NPP.  As many of you know, the United States requested to add ANPP and NPP to the international control regime under the 1988 UN Convention against Illicit Traffic in Narcotic Drugs and Psychotropic Substances.  The INCB conducted a scientific review, using information submitted by UN Member States, and recommended international control of these chemicals.  We applaud the INCB’s rapid response.  It demonstrates that the treaties are able to respond nimbly to today’s challenges.

International control of these chemicals is an important prevention measure as well.  We protect the public health and safety of our citizens by denying traffickers new markets and by preventing this epidemic from spreading to new territories.

Colleagues, we urge you to vote in support of this measure when it comes up for decision in the Plenary on Thursday afternoon.

Ladies and gentlemen, in 2015, the government of China took an unprecedented step and controlled 116 new psychoactive substances (NPS).  And just last month, China announced the domestic control of four harmful fentanyl analogues, including carfentanil, a particularly dangerous veterinary form of fentanyl.  My government applauds China’s leadership in this field.  China’s action and the INCB’s rapid response to the request to control fentanyl pre-cursors are models of how to respond efficiently and flexibly to the influx of NPS on the market.

Finally, the United States is pleased to present two resolutions for consideration during this Commission.  First, as follow-on from UNGASS, we offer a resolution seeking greater coordination across the UN system as we implement UNGASS outcomes.  Second, as follow-on from the INCB’s conference in February on precursors and new psychoactive substances, we are advocating for increased cooperation on precursor chemicals.  We look forward to discussing these texts with you in the course of this week.

I thank you, Madam Chairwoman.  We look forward to a productive and successful Diamond Jubilee Commission on Narcotic Drugs.