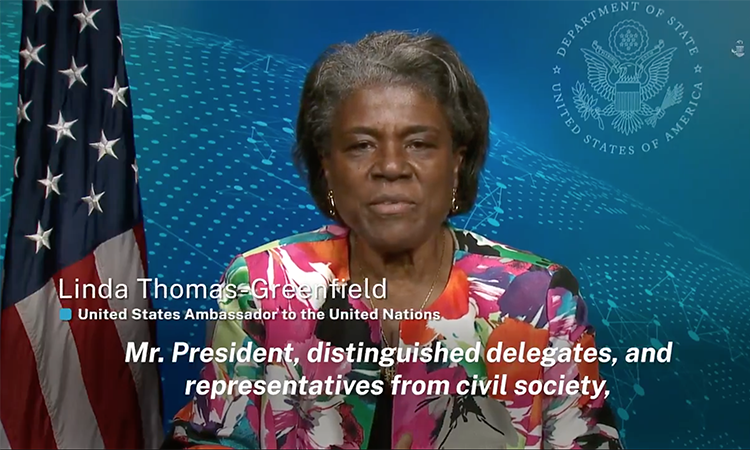 AMBASSADOR ELISABETH MILLARD: Mr. President and distinguished delegates, the United States is taking important new steps in the fight against corruption. Just this morning, and concurrent with this important event, President Biden released a National Security Study Memorandum on the Fight Against Corruption that, for the first time, establishes the fight against corruption as a core national security interest of the United States.

As we’ve heard this week, corruption chips away at the foundations of democracy, steals from the average citizens, and empowers those seeking to undermine the rule of law. Implementation of this memorandum will lead to bold, decisive actions to combat global corruption, and will make it harder for criminals to move stolen funds through the U.S. and international financial systems.

It is now my pleasure, on behalf of the United States of America, to introduce Ambassador Thomas-Greenfield to deliver the U.S. statement for the first-ever UN General Assembly Special Session Against Corruption. Thank you.

AMBASSADOR LINDA THOMAS-GREENFIELD: Mr. President, distinguished delegates, and representatives from civil society, it is my pleasure, on behalf of the United States of America, to speak with you at the first-ever UN General Assembly Special Session Against Corruption.

President Biden has called corruption “an insidious pandemic.” And as Secretary Blinken has said, it “threatens security and stability.” That’s because corruption isn’t just a threat to the pocketbooks of ordinary citizens. It prevents economic growth, extinguishes trust in public institutions, and threatens democracy itself. Corruption takes away from public and private resources, and at its worst, funds transnational crimes and human rights abusers.

So, the Biden administration is committed to taking special aim at corruption. That starts with building on the U.S. government’s existing anti-corruption tools, obligations, and commitments. That includes steps like vigorously enforcing the Foreign Corrupt Practices Act, which strengthens business environments around the world by prohibiting U.S. persons from bribing foreign officials. It also means strengthening the U.S. Department of Justice’s Kleptocracy Asset Recovery Initiative. Since 2019 alone, U.S. asset recovery efforts have led to the transfer of more than $1.5 billion to countries harmed by corruption.

Today, the world is shining a spotlight on our shared efforts to prevent and combat corruption. The United States strongly believes that we must defend, uphold, and revitalize the international anti-corruption framework. This Political Declaration is an important first step in the revitalization process. The fight against corruption begins with every country fulfilling its existing obligations, especially those enshrined in the UN Convention Against Corruption, or “UNCAC”, a treaty that enjoys near-universal ratification. Now, the challenge for all of us is to turn these commitments into real, demonstrable actions. Our Political Declaration is rooted in this existing anti-corruption framework and reflects its well-established priorities. It pushes us all to acknowledge our strengths – and weaknesses – to better fulfill our obligations and commitments under the convention.

For example, the declaration includes – for the first time – a time-bound commitment to fulfill our obligations to combat bribery, including foreign bribery, which will strengthen compliance with the UNCAC. The declaration is balanced, forward-leaning, and aspirational. It recognizes that preventing and combating corruption is a shared responsibility. And that prevention is just as important as investigation and prosecution. It acknowledges that the fight against corruption requires a partnership between all stakeholders, like governments, civil society, journalists, and the private sector. In particular, governments must see civil society as partners – not adversaries – and I look forward to the participation of civil society in the UNGASS and its side events.

The UNGASS against corruption is an opportunity to take stock of our progress while acknowledging the challenges still ahead. And for our part, the United States is committed to continued leadership in the global fight against corruption and turning our talk into action. That is why President Biden will be hosting the Summit for Democracy, which will include a focus on combating corruption and protecting democratic values. In that spirit, the United States is also formally announcing its candidacy to host the 2023 UNCAC Conference of States Parties. This will be an opportunity to reaffirm our resolve to work together to tackle some of the toughest corruption-related challenges facing us today.

We look forward to working with you – with all of you – in the coming year as we advance the commitments set forth in the UNGASS Political Declaration.