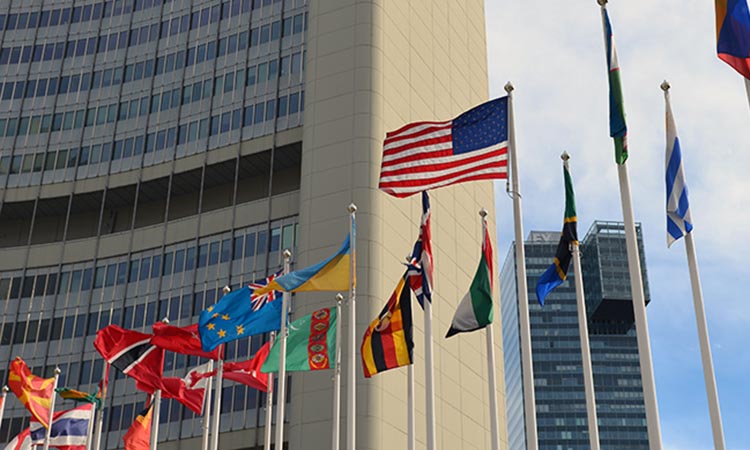 Flags in front of the IAEA headquarters in Vienna, Austria

Agenda Item 9:  Any Other Business

I am taking the floor to address several items under any other business. The United States welcomes the progress achieved over the past year to further strengthen the global nuclear security framework.  We applaud the IAEA’s continued efforts and emphasize the importance of the Agency’s role in coordinating nuclear security assistance to meet the growing requests from Member States.  Together, all of our efforts strengthen individual State nuclear security regimes that govern the security of all nuclear materials around the world, and improve the ability to prevent, detect, and respond to potential acts of nuclear terrorism.

Today, I am pleased to share information about the Joint Statement on Mitigating Insider Threats, which was circulated to Member States as INFCIRC/908 in January.  Recognizing that responsibility for nuclear security rests with the States, the United States, 26 IAEA Member States, and INTERPOL have pledged to make every effort to establish and implement national-level measures to mitigate the insider threat.  We believe that insiders possess unique access rights which, together with their authority and knowledge, grant them far greater opportunity than outsiders to bypass dedicated nuclear and radiological security elements.  It is for this reason that insiders pose an elevated threat to nuclear security.  Through this Joint Statement, we urge States to establish an integrated, graded approach whereby nuclear and radiological security programs include national-level and agency- or facility-specific Insider Threat Mitigation policies and programs, training and awareness activities, and collaboration between facility-level organizations.  The Insider Threat Mitigation Program should include strong control and accountability measures for special nuclear material that rigorously assess and continually monitor insider human reliability, deter insiders from theft or diversion, limit their access, and provide prompt detection of theft or diversion.

In this regard, Mr. Chairman, we wish to reiterate our invitation for all Member States to subscribe to the goals and commitments as described in the Joint Statement on Mitigating Insider Threats.  IAEA Member States wishing to do so are encouraged to notify the United States and inform the IAEA via note verbale, and request such official communication be circulated as an INFCIRC document to all Member States.

On this occasion, I would like to renew our appreciation to the Secretariat for its support and for providing guidance and assistance to all Member States on these extremely important topics.

At this time I would like to say a few words on the upcoming NPT Prepatory Committee meeting.  The United States looks forward to the first meeting of the Preparatory Committee for the 2020 Review Conference of the Non-Proliferation Treaty, the NPT, which will take place here in Vienna in less than two months.  The current review cycle will mark the fiftieth anniversary of the entry into force of the NPT.  This is a milestone that provides an opportunity for NPT Parties to reflect on all we have accomplished together over the past five decades, and what we aspire to achieve in coming decades.  We encourage all NPT Parties to take a broad view of how this Treaty has helped us to advance our shared security and development interests, and how we can work together to preserve and expand those benefits.  By focusing on our common interests, we hope to launch this review cycle on a positive note.

By any measure, the NPT has been extraordinarily successful.  Many countries have abandoned nuclear weapons or efforts to acquire them, and many more have decided against pursuing nuclear weapons programs.  Almost all countries have acceded to the NPT.  By helping to create a framework in which peaceful nuclear cooperation does not lead inevitably to nuclear proliferation, the NPT has paved the way for the fullest possible exchange of nuclear energy, science and technology to meet the development needs of countries around the world.  We should celebrate these accomplishments, even as we strive to achieve more.

With the Preparatory Committee taking place here in Vienna, we have particular reason to celebrate the contributions of the IAEA to the NPT and the broader nuclear nonproliferation regime.  IAEA safeguards have been critical in providing assurances that states are abiding by their nonproliferation obligations.  They have been equally important in holding to account those few states that have violated those obligations and defining the path back to compliance.  IAEA programs that promote the safe, secure and exclusively peaceful use of nuclear energy, science and technology have contributed to the development of Member States and the well-being of their citizens.  Without a strong NPT regime, these benefits would be greatly curtailed.

Mr. Chairman, the United States, as part of its presidential transition process, is currently reviewing its policies to determine how best to strengthen the NPT regime.  We recognize that other NPT Parties come to this review cycle with established positions and priorities.  In many cases, these positions are aligned and provide a basis for consensus, but, in other cases, differences are well known and consensus may not be achievable.  We would encourage all to focus on proposals where consensus is achievable.  We also encourage all NPT parties to focus on realistic and practical means to advance their underlying interests and the objectives of the NPT, particularly at this early stage of the current NPT review cycle.  We are more likely to find a path to consensus if we start by focusing on our fundamental common interests in the NPT than if we immediately and reflexively stake out opposing positions.

Mr. Chairman, the NPT reflects and reinforces the interests of all of its Parties.  That is its enduring strength.  The United States looks forward to working together with other NPT Parties to build on that foundation.

Raising issues extraneous to the work of the IAEA serves only to politicize our discussion and distract from our responsibility in guiding the important technical work of the Agency.

I also feel it necessary to respond to references to a Middle East WMD-Free Zone made by some previous speakers.  The United States continues to support the long-term goal of a Middle East free of weapons of mass destruction and delivery systems.  We remain committed to working with Russia, the United Kingdom, and the regional states to support an inclusive, consensus-based process to advance that goal.  We believe further progress is achievable, but only if all the regional states are prepared to reengage their neighbors in a direct, face-to-face dialogue aimed at bridging conceptual gaps and addressing the legitimate security concerns of all regional parties.  Continuing to rehash old arguments and efforts to point fingers are not productive and will not move this process forward.

Finally, the United States regrets that the issue of “Israeli nuclear capabilities” has once again been raised in the Board.  Israel has not violated any agreements with the IAEA and is a significant contributor to the Agency’s technical work.  Divisive statements aimed at singling out one state for criticism do nothing to advance our shared, long-term goals of Non-Proliferation Treaty universality or of a Middle East free of weapons of mass destruction and delivery systems.  On the contrary, such statements are unproductive and detrimental to achieving progress toward those goals.  We encourage all regional states to pursue constructive avenues for advancing our shared nonproliferation goals, rather than repeating the same, politicized debates of the past.

Thank you, Mr. Chairman, and apologies for taking the floor a second time on this agenda item, but we would like to respond to some comments made yesterday related to the Secretariat’s reporting on safeguards implementation.

I would first like to respond to a comment regarding the timing of a report on lessons learned and experience gained in State Level Approaches for states under integrated safeguards.  As noted, the 2016 General Conference safeguards resolution requests such a report from the Director General.

The United States joined consensus on this resolution.  However, we and other delegations made clear at the time that the text of the resolution, such a report should come after these State Level Approaches have been updated and implemented.  In our view, such a report should not occur until the Agency has sufficient experience in implementing revised SLAs.  Such a report at this time would be premature.

As we made clear during the General Conference, the Secretariat cannot be expected to make the report asked for by the GC resolution before it has at least one year of experience implementing the revised state level approaches.  Therefore it is unreasonable to expect such a report before early 2018.

Mr. Chairman, I would also like to address a second issue that has been raised, regarding the reporting on the Secretariat’s activities in Iran.

We welcome the DG’s continued reporting on its important monitoring and verification work in Iran.  In August 2015, the Board authorized the Director General to implement the necessary verification and monitoring of Iran’s nuclear-related commitments as set out in the JCPOA, and report accordingly, for the full duration of those commitments in light of United Nations Security Council resolution 2231.

In that resolution, the Security Council separately requested that the Director General provide regular updates to the Board of Governors on Iran’s implementation of its nuclear-related commitments as set out in the JCPOA.

We encourage the Director General to continue to report on the Secretariat’s safeguards implementation and other verification and monitoring work in Iran, consistent with relevant Board guidance, Board resolutions, and Security Council resolutions.

We note the importance of the Department of Safeguards’ work in Iran on the JCPOA and in implementing Iran’s Comprehensive Safeguards Agreement and Additional Protocol, provisional implementation of the latter having begun pursuant to the JCPOA.  Given this importance, we would fully expect that the full range of the Safeguards Department’s work in Iran would continue to be reflected as appropriate in the annual Safeguards Implementation Report.  This should include summarizing the Agency’s activities and findings in implementing the JCPOA.

As a general principle related to the nature of the SIR and a desire for increased transparency, the United States continues to encourage more state-by-state information in the SIR.