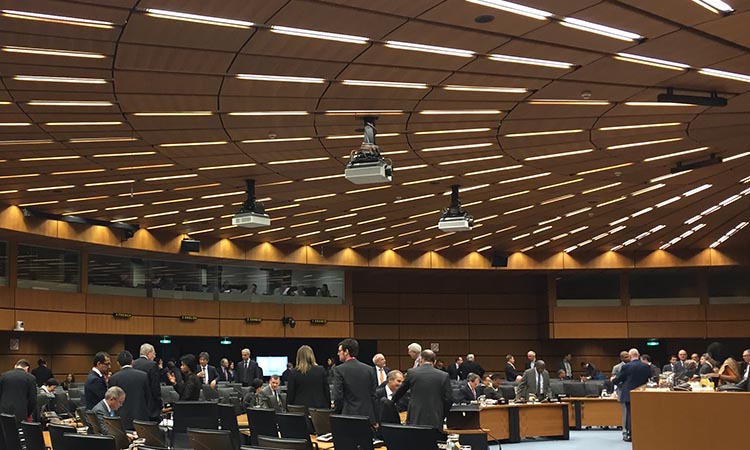 The United States remains resolute in its condemnation of the Democratic People’s Republic of Korea’s constant stream of provocative actions.  These actions most recently include the DPRK’s fourth and fifth nuclear tests, the resumption of reprocessing activities at Yongbyon, and the unprecedented campaign of ballistic missile launches including the most recent launches on February 11th and March 5th.  The resolution adopted at last year’s General Conference was an appropriate response to the DPRK’s willful violation of multiple UN Security Council Resolutions and its continued defiance of international norms.  The DPRK’s destabilizing and dangerous actions speak for themselves, and underscore why its nuclear ambitions constitute an unacceptable challenge to the global nonproliferation regime and to our shared peace and security.

Twice last year the UN Security Council unanimously adopted ground-breaking resolutions 2270 and 2231 in response to the DPRK’s nuclear tests and repeated launches using ballistic missile technology.  We urge all states to rigorously and faithfully implement the measures that were adopted.  We also urge all states to join the efforts of likeminded partners in this Board room and around the world to counter and impede the DPRK’s prohibited activities.  We call on all states to use every available channel and means of influence to make clear to the DPRK that further provocations are unacceptable, and that there are consequences to the DPRK’s unlawful conduct.

We have consistently communicated to Pyongyang that we remain open to meaningful negotiations based on the understandings reached by all members of the Six-Party Talks in the 2005 Joint Statement.  The DPRK’s commitments in that document include returning to IAEA safeguards.  As such, the United States remains firmly committed to the IAEA’s essential role in the complete, verifiable, and irreversible denuclearization of the DPRK.  We greatly appreciate the Secretariat’s efforts to maintain the Agency’s readiness to resume monitoring and verification in the DPRK.

In conclusion, Mr. Chairman, we cannot ignore the real and growing threat posed by the DPRK’s nuclear and missile programs.

The United States remains committed to denuclearization of the Korean peninsula in a peaceful manner.  I can assure you of our unflagging resolve to maintain pressure on the DPRK and compel its leaders to change course and return to talks aimed at denuclearization.