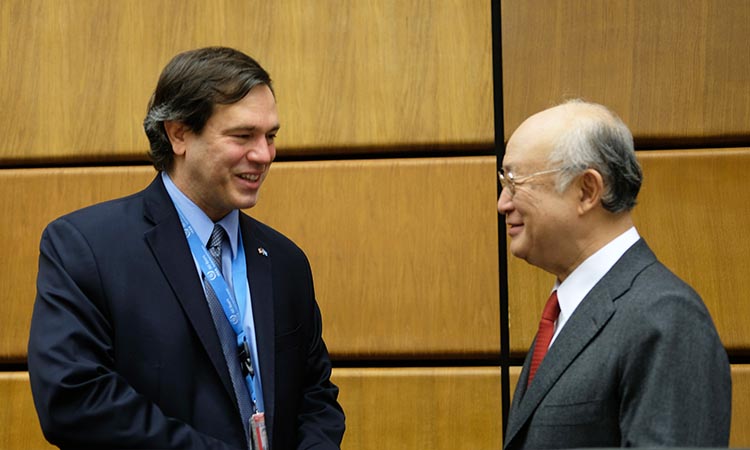 Appointment of the Director General

The United States is pleased to join the consensus decision of the Board in endorsing Yukiya Amano to serve as Director General for the term beginning December 1, 2017.

This decision by acclamation clearly demonstrates the Board’s appreciation for the Director General’s leadership during some of the Agency’s most significant challenges, including coordination of the international response to the Fukushima Daiichi accident and the start and the ongoing implementation of the Joint Comprehensive Plan of Action (JCPOA). We also applaud his effort to focus on nuclear security and the promotion of Atoms for Peace and Development, to name only a few. The Director General’s vision also has been key in generating and overseeing the construction of the critical infrastructure projects and administrative and management measures that will ensure and strengthen the Agency’s effectiveness in the 21st century.

This decision also manifests the confidence that Board members have in the DG’s ability to guide the Agency through future challenges, including those that will arise as global reliance on nuclear power continues to spread. We must recognize, however, the increased responsibilities on the part of the Agency are also coming at a time of ongoing fiscal constraints on most member states. In this context, the integrity, flexibility, and accountability that the Director General has demanded of himself and the IAEA staff during his tenure at the Agency thus far will be even more important as we look to the future.

Mr. Chairman, we join others in conveying our warm congratulations to the Director General, and in expressing our commitment to continued cooperation with him and pledging our full support to him in the exercise of his mandate.