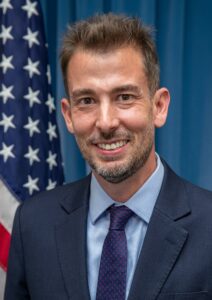 Barry Fullerton is the Counselor for UN Affairs at the U.S. Mission to International Organizations in Vienna, leading U.S. engagement with several UN bodies, including the UN Office on Drugs and Crime (UNODC).

Barry most recently served as the Director of the Office of Global Programs and Policy in the State Department’s Bureau of International Narcotics and Law Enforcement Affairs (INL), where he managed the bureau’s multilateral engagements and oversaw an annual foreign assistance budget of $130 million.  Immediately prior, Barry was the Economic Counselor at the U.S. Embassy in Paris, where he advanced bilateral cooperation on trade, energy, digital, and cyber issues.  Barry also served as INL’s deputy director in Kabul, managing the implementation of rule of law and counternarcotics assistance programs in Afghanistan.  Immediately prior to Afghanistan, Barry worked at the U.S. Embassy in Bogota, Colombia, where he coordinated a bilateral presidential initiative with Colombia to support joint security assistance projects in Central America and the Caribbean.

A career member of the U.S. Foreign Service, Barry’s earlier assignments include the Executive Assistant to the Assistant Secretary of State for International Narcotics and Law Enforcement Affairs; a Senior Watch Officer in the State Department’s Operations Center; the Trade and Investment Officer in Bangkok; the Human Rights and Labor Officer in Manila; and the Economic and Commercial Officer in Port of Spain.  Barry has earned numerous State Department awards, including four Individual Superior Honor Awards.  Prior to joining the Foreign Service, Barry worked at the U.S. Department of Justice and the U.S. Department of the Treasury in support on INL-funded programs around the world.  Barry hails from Memphis, Tennessee, and is a graduate of Rhodes College.