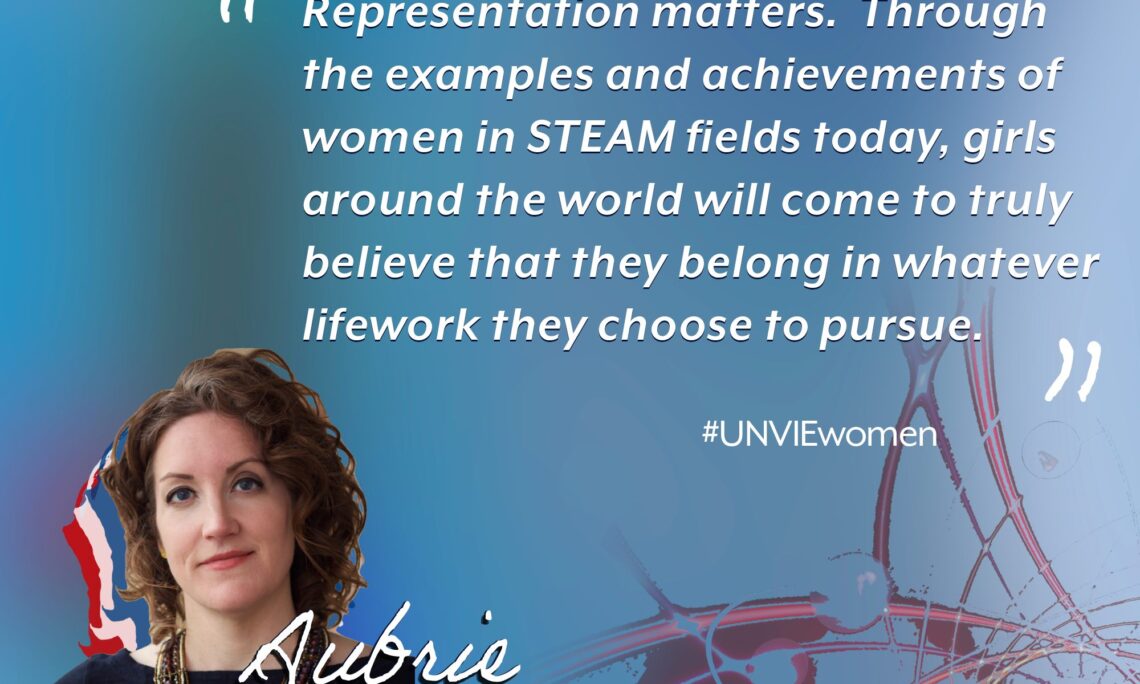 We continue our series to celebrate the accomplished and visionary women working at UNVIE with Deputy Counselor for IAEA Affairs, Aubrie Ohlde. Aubrie answers questions about her work, what inspired her to take up this career path, and why it’s important to promote gender equality in government and in STEAM.

Describe your job / what you do?

As one of two Deputy Counselors in the IAEA Section at UNVIE, I work with a team of officers to support the IAEA’s nuclear safeguards work, including through the provision of relevant U.S. technology, expertise, and funding. Nuclear safeguards are the technical measures the IAEA uses to independently verify that nuclear facilities are not misused and nuclear material is not diverted from peaceful uses.

How did you decide on this career path?

In many ways, it was less a decision and more a gradual, unintentional progression — but one with which I could not be more pleased in retrospect! I grew up on a farm outside a tiny town in very rural north central Kansas. From an early age, I began reading books set around the world and developed a very strong urge to see the places I read about. As an undergraduate, I chose a major that I thought would offer a ready path out of Kansas: political science and international studies. The summer before my final year at Kansas State University, I applied for and was offered several DC-based internships. Because I was paying my own way through college on scholarships and work-study, I chose the one that offered a stipend, which just happened to be at think-tank focused on non-proliferation topics, including nuclear, chemical, and biological weapons. That summer internship turned into a full-time job upon graduation. Through that job, I gained experience that later won me a slot in Department of Defense-sponsored masters degree program, which then opened the door to a now 15-year government career in various non-proliferation and counterproliferation-focused areas, including several interagency detail assignments, and a three-year stint at the National Security Council. All this ultimately led me here to UNVIE! I would have had a hard time charting out this career path as a little girl doing cattle chores in Kansas but I’m incredibly grateful to have ended up here.

What is it like being a woman working in a STEAM field?

Although my background is in “soft science,” I have spent the bulk of my career in jobs that are STEAM-adjacent. Early on, I sometimes found myself as the only woman in a room full of men. Even when these male colleagues were supportive and respected my input — which was almost always the case — it could still be quite intimidating and isolating to be the solitary woman, particularly since I lacked a hard science background, which many of these male colleagues had. In more recent years, it has been refreshing to encounter an increasing number of women in similar rooms, many of whom are walking through the door with hard science credentials. It has been a noticeable shift and a welcome one. But there is still more work to be done and new ground to be broken. For instance, I am the first woman to fill in my particular role at UNVIE.

Why is it important that women work in STEAM fields?

I think it is important that women be active in all professional fields. I firmly believe diversity – including gender diversity – promotes more creative and innovative thinking and leads to better outcomes, no matter the challenge at hand. However, in traditionally male-dominated spaces like STEAM fields, it is even more critical that women be present and visible. Representation matters. Through the examples and achievements of women in STEAM fields today, girls around the world will come to truly believe that they belong in whatever lifework they choose to pursue and that they are fully capable of achieving great things wherever their interests lie.

How does the work you do help UN member states and improve the lives of people around the world?

Together with the rest of the safeguards team at UNVIE, I support the IAEA’s work to detect and prevent the misuse of nuclear material and technology, which in turn keeps the world and its inhabitants safer. Further, by protecting against misuse and diversion of nuclear material, the IAEA’s safeguards mission enables broader promotion of the peaceful uses of nuclear technology, which benefit millions of people around the world.

What is the United States doing to promote gender equality in government and in STEAM?

How does your work further U.S. interests?

Nuclear nonproliferation is a critical U.S. national security priority. For instance, it is in the United States’ interests to deter the spread of nuclear weapons and protect against the acquisition of radioactive material by nefarious actors. By preventing the misuse of nuclear facilities and the diversion of nuclear material for non-peaceful uses, IAEA safeguards help to accomplish these and other nonproliferation objectives.