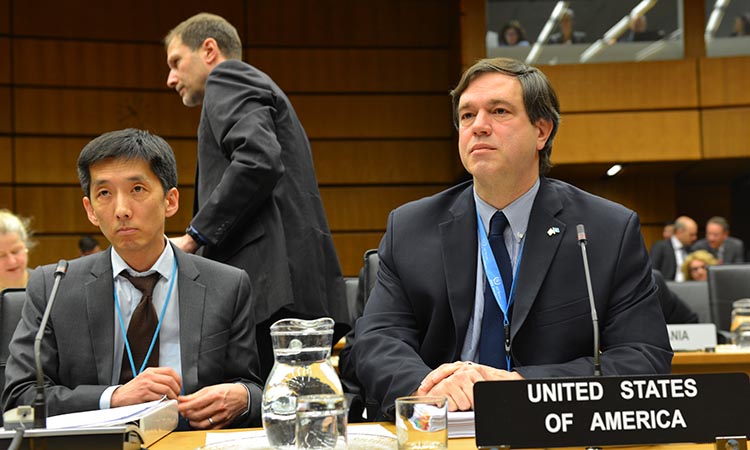 The United States fully supports and endorses the IAEA’s many efforts to enhance the safety and security of radioactive sources and including through the guidance contained in the IAEA Code of Conduct on the Safety and Security of Radioactive Sources and its Supplementary Guidance on the Import and Export of Radioactive Sources. The United States makes every effort to implement the Guidance and encourages other Member States to do the same, in line with repeated resolutions of the Board and General Conference since the promulgation of the Code of Conduct.

Mr. Chairman, we believe the draft document GOV/2017/4 provides much-needed general guidance to Member States on actions they can take to meet their political commitment to the Code of Conduct. Just as the Supplementary Guidance on the Import and Export of Radioactive Sources, that the Board approved in 2004, expands on a section of the Code that States felt would benefit from further detail, this new draft guidance is also intended to provide greater context and high level guidance on how best to meet the intent of the Code in relation to the management of disused sources.

We know this guidance is needed. Disused sources are regularly a major topic of discussion amongst Member States, and the need for additional guidance is frequently mentioned. For example, the 2009 annual meeting of the Code of Conduct focused explicitly on the long term management of disused sources. Other meetings have included long and detailed discussions about challenges and concerns with disused sources. This continued attention culminated in a formal recommendation by technical experts to the Secretariat at the 2013 Abu Dhabi conference on the safety and security of radioactive sources that “additional guidance at the international level for the long-term management of disused radioactive sources should be developed” and indicated it “may form supplementary guidance to the Code of Conduct.”

Since that conference, the issue has arisen at each subsequent meeting of the Working Group on Radioactive Source Security; in the last three years, the IAEA has also updated attendees on the progress of drafting this guidance. The draft document has also been discussed at every annual meeting of the Code of Conduct. Resolutions of the General Conference have referred to this text explicitly, beginning in 2014, and calls upon Member States to ensure there is adequate provision for safe and secure storage and disposition pathways for disused radioactive sealed sources.

The first and second technical meetings devoted to reviewing the draft guidance both concluded with all participants agreeing their work was necessary and committing to continue the process. The participants also agreed the development of the guidance should continue to be pursued as supplementary guidance under the Code of Conduct. The third meeting ended with an overwhelming number of States agreeing no further revision to the draft text was necessary and supporting the approach of sending the document to the Board for approval as supplementary guidance.

This guidance will benefit everyone. Importing States can use the guidance to better understand what they need to do to improve the safety and security of disused sources in line with the provisions of the Code. It covers actions across the source life cycle, starting with the decision to acquire a radioactive source and continuing through disposal, advising on the available management options States should consider. This also helps exporting States, by further assuring them that source recipients are responsibly managing imported sources. Taken together, widespread support of the guidance and adoption of its recommendations will improve global source management and increase our safety and security.

Mr. Chairman, in conclusion, the U.S. strongly supports Board approval of GOV/2017/4 the Guidance on the Management of Disused Radioactive Sources as Supplementary Guidance to the Code of Conduct on the Safety and Security of Radioactive Sources. We call on all Board members to join in supporting approval of this important and necessary document.

As we made clear in our statement, we believe strongly that the draft supplementary guidance is ready to be approved by the Board. We continue to support the intent of this draft guidance and appreciate the hard work put in by Member State experts and by the Secretariat. Based on what we have heard, we recognize there is not currently consensus on this draft. While the rules of procedure do not require consensus, we value the spirit of consensus in Vienna and are willing to work toward it in the interests of garnering the widest possible support of the draft guidance. So we support the Chair’s proposal to temporarily defer consideration of this agenda item to later in the week.

Let us reiterate, though, that we know there is a need and broad desire for this guidance, that we believe the guidance meets that need, and that we should not allow the guidance to be abandoned or pushed too far down the road. If the small number of substantive concerns raised about the guidance are addressed in good faith, which we are ready to do, we should be able to move quickly toward Board approval. We are willing to engage in further consultations on determining a path to such approval at the earliest opportunity. Consultations should begin promptly and focus on coming to an understanding that would allow all interested parties to affirm a commitment to working in good faith toward adoption of the draft guidance as a supplement to the Code of Conduct. If that can be accomplished, we can then consider an appropriate format for addressing remaining substantive concerns in an expeditious manner. Given the clear need for additional work to improve radiological source security across the globe – and the consequences of the use of one of these sources in an attack – we have a responsibility to move forward with measures, such as the Code of Conduct, that strive to make security advances. For this reason, any lengthy delay is not acceptable.

We hope the Secretariat and Board Chair can facilitate the proposed consultations and help ensure we all remain seized of this issue. We look forward to working with you all, and any other interested Member States, to move forward on this issue promptly and productively.