Home Home | News & Events | IAEA Board of Governors: The Annual Report for 2016 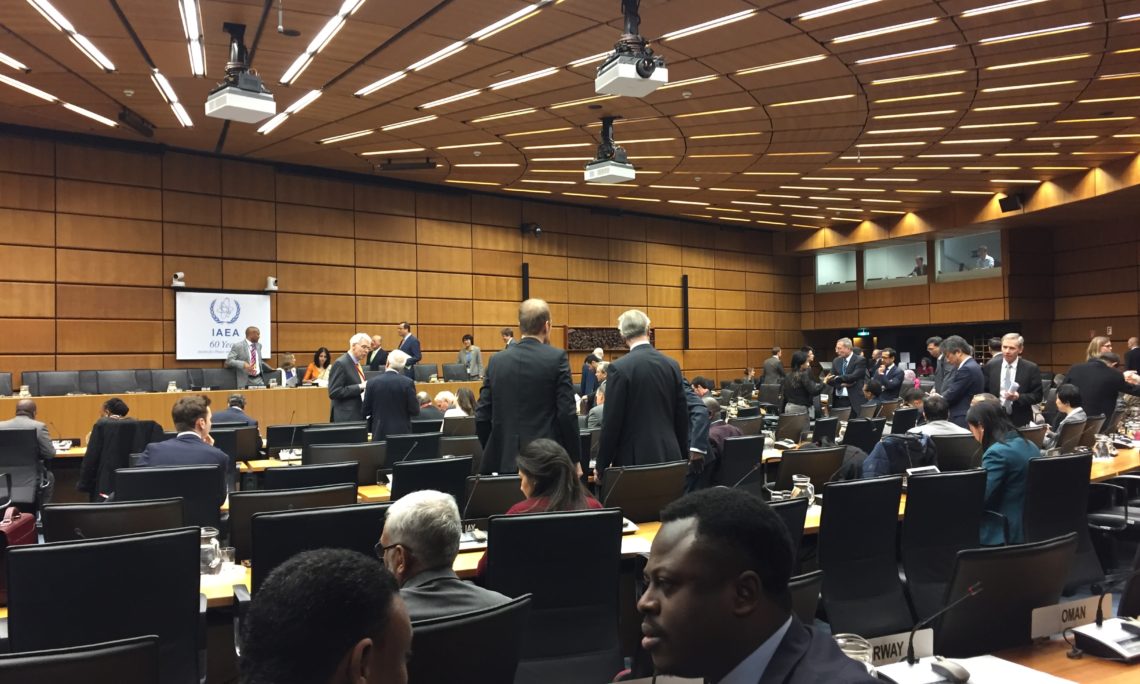 Thank you very much Mr. Chairman,

Since this is the first time I am taking the floor today I hope you won’t mind if I take note of a number of recent tragic events that occurred in the last two weeks specifically the terrorist attacks in Iraq, Afghanistan, the UK, and Iran. On behalf of the United States we express our condolences to the victims and their families, and send our thoughts and prayers to the people of those countries. Terrorism has no place in a peaceful, civilized world and we stand with its victims wherever such events occur.

The draft Annual Report for 2016 provides a helpful summary of the IAEA’s critical role in ensuring global access to nuclear energy and technology when used safely, securely, and under sound nonproliferation conditions. I wish to underscore a few areas in the Report.

First, we are pleased that the Report summarizes how the IAEA is using workshops, training, e-learning tools, review services and other tailored activities to help Member States utilize nuclear power as part of their energy mix. We note in particular the Agency’s use of Integrated Nuclear Infrastructure Review missions to help countries evaluate their readiness for nuclear power and the work of INPRO in addressing nuclear power’s sustainability. We are also pleased that the IAEA LEU bank has moved steadily closer to completion.

In the area of nuclear safety, we commend the Secretariat for preparing a comprehensive Nuclear Safety Review and urge continued engagement with Member States to assess priorities and to guide the Agency’s work. We encourage parties to the Convention on Nuclear Safety and the Joint Convention to participate fully in those conventions. We welcome states that have joined the Convention on Supplementary Compensation for Nuclear Damage as well as additional Member State political commitments to implement the Codes of Conduct for the Safety of Research Reactors and the Safety and Security of Radioactive Sources.

On nuclear security, the Annual Report highlights the IAEA’s central role in coordinating international cooperation in several areas. These include for example, the IAEA’s work on the Amendment to the Convention on the Physical Protection of Nuclear Material and Nuclear Facilities, its management of International Physical Protection Advisory Service or (IPPAS) missions, and its extensive security-related training activities which continually enhance security practices worldwide. We applaud the IAEA for hosting the International Conference on Nuclear Security in a December of 2016 to help Member States address nuclear security challenges.

In the area of safeguards, the IAEA continues to implement effective verification measures that support the safeguards conclusions drawn for each state, in addition to fulfilling its important role monitoring and verifying Iran’s nuclear commitments under the Joint Comprehensive Plan of Action. We note favorably that the Agency’s MOSAIC project continues to enhance all legacy safeguards IT applications and is working to strengthen the security of safeguards data. We continue to support these and other efforts to strengthen the overall effectiveness and efficiency of the IAEA state-level approach to safeguards activities, in particular activities that provide credible assurances about the absence of undeclared programs.

On non-power nuclear applications, the Report summarizes how the IAEA’s expertise is making a global impact in areas that include human and animal health, food security, and water resources. Agency activities that help ensure the reliable supply of radioisotopes, including through use of non-reactor based technologies, and to combat the Zika virus are of particular note.

We note that U.S. voluntary contributions to promote peaceful nuclear applications, including through the Peaceful Uses Initiative, have alone totaled over $270 million U.S. dollars since 2010. Consistent with the NPT, we urge states in a position to do so to support global uses of nuclear science and technology for peaceful purposes.

We welcome the joint statement made by Ambassador Dobel on behalf of the Friends of ReNuAL group, and thank their ambassadors and the Secretariat for their excellent leadership as we work together to achieve important resource mobilization milestones. The United States is a strong supporter of the Renovation of the Nuclear Applications Laboratories at Seibersdorf (ReNuAL) – most recently with a voluntary contribution of 1 million euros announced in May at the NPT Preparatory Committee. The Friends of ReNuAL are now over halfway to meeting the need for 2 million euros by the end of June. We must also remember the total goal of 6.7 million euros by September. Meeting these milestones will help ensure that the Agency is in a position to achieve cost and construction efficiencies while completing the labs as quickly as possible. These labs play an important role in helping the IAEA deliver its Technical Cooperation Program to the Member States. We thank the Member States that have so generously supported this important project to date and we urge all Member States in a position to do so to contribute to ReNuAL+, including through the Peaceful Uses Initiative, after contributing all Technical Cooperation Fund (TCF) and National Participation Costs (NPCs) in a timely manner.

Mr. Chairman, I am happy to join what appears to be a growing trend in taking note of gender and gender equality in Board statements, I am pleased to endorse this week’s launch of the International Gender Champions initiative in Vienna.  Founded in Geneva and having recently expanded to New York, the International Gender Champions initiative is a leadership network that brings together female and male decision-makers to break down gender barriers.  We had hoped to have 20-25 champions signed on for this week’s launch, but I am very happy to announce that we are already 46 strong and counting.  I have joined the ranks of other permanent representatives as well as heads of international organizations and NGOs in making the panel parity pledge which ultimately seeks gender balance on speaker panels as well as making two or more other individual commitments as we strive for gender equality in the workplace and the elimination of implicit bias in our daily lives.  I invite everyone here to attend the public launch of the event, at which Director General Amano will speak, this Wednesday, June 14 at 1:30 p.m. in the Rotunda of the VIC and we hope to see many of you there.

The United States joins other Board Members in recommending submission of the Annual Report for 2016 for the General Conference’s approval.