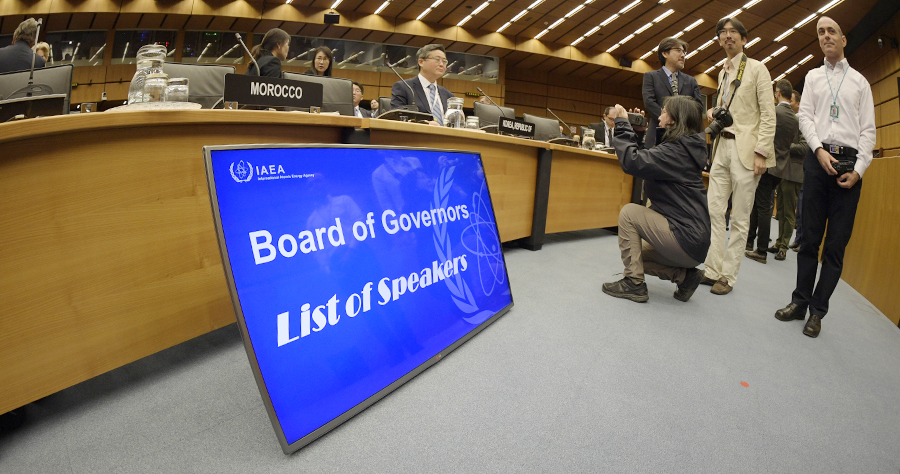 Journalists snap photos of participants prior to the opening session of the September 2019 IAEA Board of Governors meeting, Vienna, Austria, Sept. 9, 2019. (USUNVIE)

IAEA Board of Governors Meeting, Agenda Item 5(a): Any Other Business Consolidated Statement

The United States looks forward to a successful Non-Proliferation Treaty Review Conference next year and stands ready to work with all NPT Parties toward a positive outcome. Next year marks the 50th anniversary of the Treaty’s entry into force. It is an opportunity to reflect on accomplishments over the last 50 years, to reaffirm commitments to the NPT, and to rededicate ourselves to preserving and further strengthening the NPT regime for future generations.

The United States recognizes the tremendous work of the IAEA as the focal point for international cooperation in peaceful uses of nuclear energy. IAEA programs have addressed the sustainable development needs of more than 120 Member States. We encourage other Member States to join us in supporting them.

In the NPT context, the United States also welcomes efforts to highlight national and international work to advance the application of nuclear energy, science, and technology, such as workshops focused on the transformative benefits derived from the NPT. We applaud the involvement of both the traditional NPT diplomatic community, as well as the non-traditional stakeholders from industry, academia and technical fields, in the discussions during these workshops, and hope the outcomes will contribute to a positive Review Conference. In the same vein, we note with pleasure the thematic seminar hosted yesterday and the day before here in Vienna by the UN Office on Disarmament Affairs, generously funded by our EU colleagues. We believe that Vienna, the home of the IAEA, is a perfect place to begin a conversation on how we can work together to improve access to the myriad benefits of peaceful uses of nuclear energy, science, and technology. Any effort in this area must build upon and complement the great work of the IAEA in this area.

The United States regrets that the issue of so-called “Israeli nuclear capabilities” has once again been raised in the Board, as Israel has not violated any agreements with the IAEA, and is a significant contributor to the Agency’s technical work. We note that no other Member State is singled out for such unfounded criticism. Divisive statements aimed at disparaging a state in good standing will not advance our shared goal of a Middle East free of weapons of mass destruction and delivery systems, and can only further perpetuate the deep lack of trust among the regional states. We urge all regional states to refrain from politically-motivated statements and to instead engage their neighbors directly in an inclusive, cooperative manner about their regional security concerns.

The United States supports the goal of a Middle East free of weapons of mass destruction and delivery systems, alongside a comprehensive and durable regional peace. We remain committed to supporting the regional states as they pursue direct, inclusive dialogue aimed at building trust and addressing the political and security obstacles that have impeded progress on such a zone, including: the lack of trust among the regional states; ongoing conflict and noncompliance by states in the region; the deplorable use of chemical weapons by the Assad regime and non-state actors; ballistic missile development and proliferation; and the non-recognition of Israel by many regional states.

We remain convinced that efforts to advance such a zone must be pursued voluntarily on the basis of arrangements mutually agreed upon by all the regional states, consistent with international practice. We deeply regret the decision by some regional states to proceed with a conference on the establishment of such a zone, despite the absence of consensus support and participation by all the regional states concerned. We fear that such efforts can only set back prospects for inclusive regional dialogue toward the goals we share. For this reason, the United States did not participate in the conference and will regard any potential outcome of it as illegitimate.We continue to believe that a more productive way ahead would be for regional states to pursue direct dialogue on practical steps that could build trust and promote an environment conducive to such a zone. We encourage the regional states concerned to abandon misguided multilateral initiatives and pursue truly cooperative and inclusive approaches that can command consensus support in the region.

The 2020 International Conference on Nuclear Security is fast approaching, and we look forward to developing a strong and forward-leaning Declaration that focuses high-level priorities in nuclear security and is worthy of Ministerial attention. We urge Member States to attend the ICONS at the ministerial level, as high-level participation demonstrates our shared interest in building a strong nuclear security regime and reinforces the commitments we make at the conference.

Preparations are also underway for the Conference to Review the Amended Convention on the Physical Protection of Nuclear Material. We thank Argentina and Australia for co-chairing the legal and technical meetings this year and setting the stage for the PrepCom next year and a successful conference in 2021. We call on all states not yet party to ratify and implement the CPPNM and its Amendment to bring us closer to having a universal global legal framework for nuclear security. For those States already Party, we note that only 48 of the 122 current Parties have acted on the call in Article 14 to “inform the depositary of its laws and regulations which give effect to the Convention.” We request all Parties that have not yet done so to follow through on that obligation.