Home Home | News & Events | IAEA Board of Governors – U.S. on Verification and Monitoring in Iran 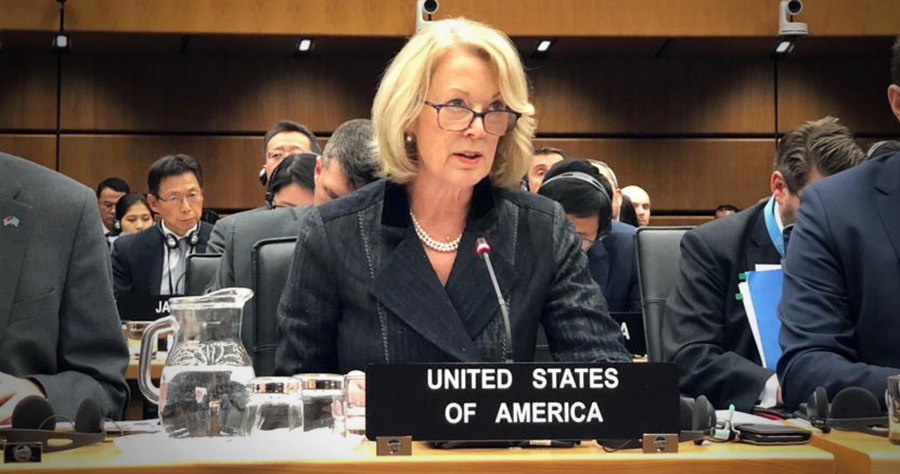 Ambassador Jackie Wolcott at the IAEA Board of Governors Meeting, Nov. 21, 2019. (USUNVIE)

IAEA Board of Governors Meeting, Agenda Item 3: Verification and Monitoring in Iran

The United States extends our appreciation to the Acting Director General, the Deputy Director General for Safeguards, and their staff for their continued professionalism and dedication in carrying out their critical responsibilities in Iran. We welcome the Acting Director General’s September 26, November 7, November 11, and November 18 reports. As events unfold rapidly, we note that continued thorough and factual reporting on Iran’s nuclear activities remains essential – perhaps now more than ever – for the Board to accurately assess Iran’s implementation of its safeguards obligations and other nuclear-related commitments. Such reporting is all the more important at this time to enable the Board to support the Secretariat’s efforts should there be any further delay, denial, or deception in Iran’s dealings with the IAEA. In this regard, the Secretariat can continue to count on the full support and confidence of the United States as it implements its crucial mandate.

Now, almost a full year later, the Board is only beginning to understand the scope of this deeply troubling issue. That Iran has failed to sufficiently address this issue for close to a year is wholly unacceptable. That there are possible undeclared nuclear materials present and activities ongoing in Iran still today is profoundly concerning. Once again, the Board is faced with new indications of potential Iranian disregard for its safeguards obligations. In his November 7 briefing, the Acting Director General noted that “[t]he composition of these particles indicates that they may have been produced through uranium conversion activities.” Iran must comply fully with its nuclear safeguards obligations, and it must immediately provide a credible answer to the pressing questions of where these particles came from, and where any related nuclear material and equipment is today. The Board must understand whether Iran has declared all of its reportable nuclear material, sites, and facilities as required, or whether it is continuing to conceal proliferation-sensitive activities from the IAEA.

The possibility of undeclared nuclear material and activities goes to the heart of the IAEA’s essential verification role, and of whether Iran is in compliance with its safeguards obligations today. The Board has a fundamental responsibility to respond with gravity and urgency in support of resolving these issues. Continued noncooperation by Iran would be unacceptable and would merit the Board’s appropriate escalation of this issue.

Let me also underscore here again that the professional staff of the Agency has the full and unwavering support of the United States, and that the detention or intimidation of Agency inspectors will not be tolerated. We request that the Acting Director General keep the Board fully apprised of any further harassment of IAEA personnel in the performance of their professional responsibilities in Iran, and we welcome his decision to bring these issues to our attention over the past weeks.

Iran has a history of deception, and we must ensure that Iran’s actions do not distract from the IAEA’s vital verification efforts. Iran’s past pursuit of nuclear weapons – and its efforts to preserve and conceal information from its prior nuclear weapons work – heightens the already great seriousness with which we must all view these new and concerning developments. Recognizing the important questions raised by these recent findings, the Board should note it supports the IAEA’s continued, careful, and independent assessment of all available information on Iran’s nuclear activities in accordance with the IAEA’s standard safeguards practices, which is fully within the IAEA’s verification mandate.

At the same time the Acting Director General is reporting these serious safeguards concerns, Iran has continued to expand its proliferation-sensitive nuclear activities. Iran continues to enrich uranium up to 4.5 percent and increase the size of its enriched uranium stockpile, and it continues to take provocative actions to expand uranium enrichment research and development. Most recently, Iran is now resuming uranium enrichment at the Fordow facility, the fortified, underground bunker Iran originally constructed to conduct secret uranium enrichment work. There is no legitimate reason for Iran to resume uranium enrichment at this previously undeclared site, and Iran should reverse its activity there immediately. In addition, Iran has now exceeded the 130 metric ton limit on its heavy water stockpile, at a production plant originally designed to produce heavy water for a reactor ideally suited to produce weapons-grade plutonium.

The international community should speak with one voice to insist that Iran reverse these escalatory steps immediately. We have made clear that Iran’s actions are transparent attempts at extortion that will only deepen its political and economic isolation. They are clearly aimed at escalating tensions rather than defusing them, and underscore the serious challenges Iran continues to pose to the IAEA safeguards system and to international peace and security. Nuclear escalation will only deepen the pressure Iran is facing and the crisis Iran continues to make for itself. Such brinkmanship and extortion tactics will neither resolve the current impasse nor bring Iran sanctions relief.

The United States is willing to negotiate with Iran without preconditions to resolve the issues that divide it from the international community, and we continue to offer Iran the possibility of full normalization of relations and the lifting of sanctions. As President Trump has repeatedly made clear, we remain ready and waiting for such diplomatic engagement. Our goal is the conclusion of a comprehensive deal with Iran that addresses our concerns, ends Iran’s destabilizing behaviors, and fully reintegrates Iran into the international community. To achieve relief from sanctions pressure, however, Iran must be willing to end its malign behavior and take lasting steps that deny it any pathway to nuclear weapons.

The IAEA has the authority to request access to any location in Iran – civil or military – to verify Iran’s declarations under its Comprehensive Safeguards Agreement and Additional Protocol when a question or inconsistency has arisen. In light of the new information being reported to this Board, we should recall the IAEA’s fundamental responsibility to pursue any concern regarding undeclared nuclear material or safeguards-relevant activities in all states under IAEA safeguards, and its responsibility to bring sufficiently serious concerns arising from these efforts to the attention of all of us – the governing body of this agency. We have full faith and confidence that the Agency and its highly skilled and professional inspectors will continue to do so appropriately.

We have long highlighted the importance of adequate resources in support of the IAEA’s crucial monitoring role in Iran. The United States welcomes the numerous pledges of financial support for these verification and monitoring efforts, augmenting regular budget resources. We must all continue to ensure that while pursuing the IAEA’s vital responsibilities in Iran, we are also able to support fully the Agency’s other essential tasks globally in safeguards, security, safety, and the peaceful uses of nuclear energy.