Home Home | News & Events | IAEA Board of Governors – U.S. Statement on Verification and Monitoring in Iran 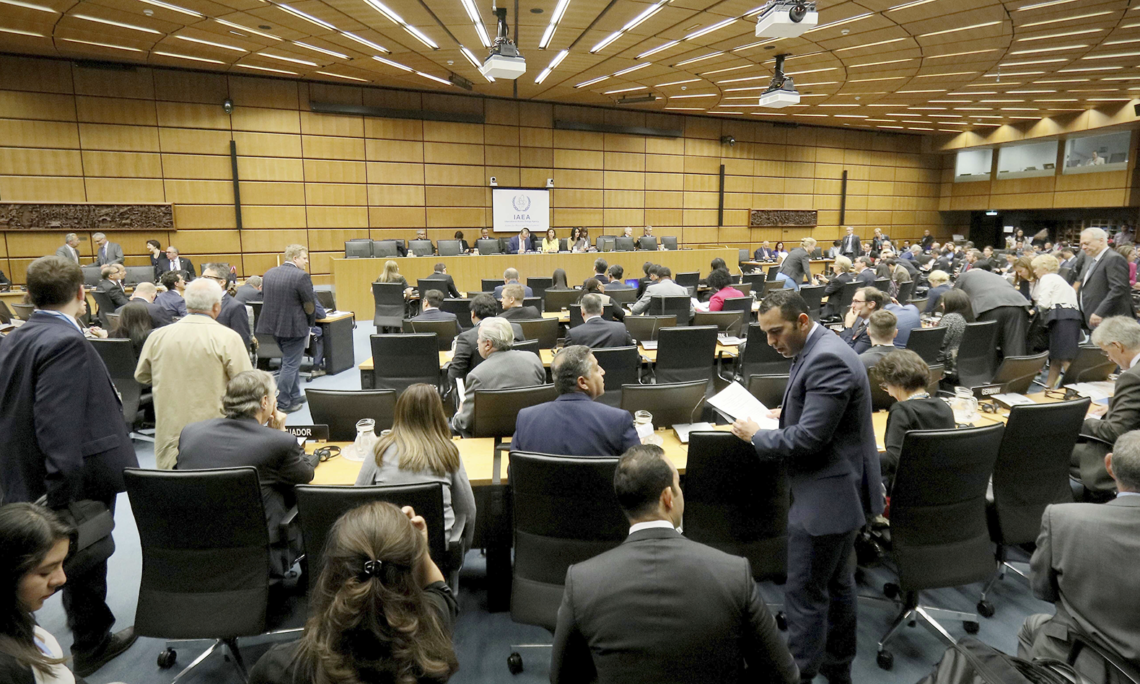 U.S. Statement on Agenda Item 6: Verification and Monitoring in Iran

The United States welcomes the Acting Director General’s August 30 and September 8 reports on verification and monitoring in Iran. We extend our appreciation to the Acting Director General, the Deputy Director General for Safeguards, and their staff for their professionalism and dedication. Their work provides crucially important independent international nuclear verification. Continued thorough and factual reporting on Iran’s nuclear activities remains essential for the Board to accurately assess Iran’s implementation of its safeguards obligations and nuclear commitments, and to enable the Board to support the Secretariat’s efforts should there be any more delay, denial, or deception in Iran’s dealings with the IAEA. In this regard, the Secretariat can continue to count on the full support and confidence of the United States as it implements its mandate in Iran.

We note with significant concern the IAEA’s recent quarterly report on Iran, particularly the suggestion that new issues might have arisen concerning Iran’s implementation of its safeguards obligations – potentially on a matter related to undeclared nuclear material or activities. Nor does Iran appear to be fully cooperating with the IAEA in resolving such issues.

We have heard from the Acting Director General that discussions with Iran now involve questions about the completeness of Iran’s safeguards declarations. The Acting Director General, in fact, had to travel to Tehran personally in response to this problem, and his opening statement to this meeting stressed that “time is of the essence” for Iran to provide full and timely cooperation. This is a very significant new development, for while Iran’s record of poor cooperation with the IAEA makes it entirely unsurprising to learn that Iran may not be providing full and timely cooperation, this is the first time since 2015 that the IAEA has reported to the Board about potential problems concerning Iran’s cooperation with the IAEA on safeguards issues.

Any indication that Iran is providing insufficient cooperation to the IAEA on a matter involving potential undeclared nuclear material or activities raises serious and profound questions that go to the heart of Iran’s safeguards obligations. Iran’s failure to resolve the Agency’s concerns on this matter is completely unacceptable and should be of deep concern to all who support the IAEA and its safeguards verification regime, regardless of any policy differences we may have over how to address Iran’s nuclear provocations more broadly.

Let me say as clearly as possible, Iran must immediately provide the IAEA nothing short of full cooperation. We support and have full confidence in the IAEA’s pursuit of all safeguards-relevant questions in Iran. We urge the Secretariat to report to the Board in more detail as soon as possible, pursuant to established IAEA safeguards practice when confronted with verification concerns, especially in a state with a track record of deceiving inspectors. The Board will need additional details about the IAEA’s concerns regarding this new safeguards issue.

Iran has a history of deception, and we must ensure that Iran’s actions do not distract from the IAEA’s vital verification efforts. Iran’s past pursuit of nuclear weapons – and its efforts to preserve and conceal information from its prior nuclear weaponization work – heightens the already great seriousness with which we must all view these new and concerning developments. Any potential delay, denial, or deception by Iran that inhibits the IAEA’s essential safeguards verification work must be addressed immediately. Refusal by Iran to do so will only underscore our concern that the matters before us may relate to serious questions regarding Iran’s compliance with its safeguards obligations.

We last met to discuss and address the critical matter of Iran’s implementation of its nuclear obligations and commitments two months ago today in a special meeting of the Board. The United States called that urgent meeting following two special reports from the Director General following Iran’s expansion of its uranium enrichment program. At that meeting, the United States made clear that Iran’s actions to expand its uranium enrichment activities were blatant attempts at extortion that would only deepen its political and economic isolation.

Now, at the same time the Secretariat is reporting insufficient safeguards cooperation by Iran, the Acting Director General reports that Iran has continued to expand its proliferation-sensitive nuclear activities. Iran continues enriching uranium at up to 4.5 percent and expanding its enriched uranium stockpile, and is now taking the new provocative action of expanding uranium enrichment research and development. Such R&D has the potential, over time, to position Iran to move faster in a “breakout” scenario toward nuclear weapons, should it decide to pursue them. Significantly, unlike Iran’s previous steps, any gain in understanding from expanded R&D work is not reversible, as that knowledge, once gained, will remain with Iran. Make no mistake, Madam Chair, such R&D work is an irreversible step that increases Iran’s proliferation threat. The international community should speak with one voice to insist that Iran cease these escalatory steps now.

Iran’s nuclear posture is clearly aimed at escalating tensions rather than defusing them, and underscores the serious challenges Iran continues to pose not just to the integrity and efficacy of the IAEA and the safeguards system, but indeed to international peace and security more broadly. Nuclear escalation of the kind Iran is attempting will only deepen the pressure Iran is facing and exacerbate the crisis Iran continues to make for itself. Such brinkmanship and extortion tactics will neither resolve the current impasse nor bring Iran sanctions relief.

The United States is open to negotiation with Iran without preconditions, when the time is right, to resolve the issues that divide it from the international community, and we are offering Iran a possibility of a full normalization of relations and the lifting of sanctions. As President Trump has repeatedly made clear, we remain ready and waiting for such diplomatic engagement. Our goal remains the conclusion of a comprehensive deal with Iran that addresses our concerns, ends Iran’s destabilizing behaviors, and fully reintegrates Iran into the international community. To achieve relief from sanctions pressure, however, Iran must be willing to end its malign behavior and take lasting steps that deny it any pathway to nuclear weapons.

As we look toward a comprehensive deal that assures Iran cannot ever obtain nuclear weapons, Iran must finally address why it secretly retained an immense archive of materials from its past nuclear weapons program that could easily facilitate a resumption of nuclear weapons work. And maybe even more importantly today, in light of new concerns regarding Iran’s safeguards cooperation, we should all be asking ourselves what else is the Iranian regime continuing to hide? These are matters of direct and increasingly urgent relevance to the IAEA’s work, and critical to how we approach verification issues in a new deal going forward.
Madam Chair,

We welcome that the IAEA continues to evaluate Iran’s declarations under the Additional Protocol, and has conducted complementary access inspections to all sites and locations in Iran that its inspectors have so far needed to visit. The IAEA has the authority to request access to any location in Iran – civil or military – to verify Iran’s declarations under its Additional Protocol and Comprehensive Safeguards Agreement when a question or inconsistency arises.

In light of the new information being reported to the Board, we should recall the IAEA’s fundamental responsibility to pursue any new concern about undeclared nuclear material or safeguards-relevant activities in all states under IAEA safeguards. We have full faith and confidence that the Agency and its highly skilled and professional inspectors will continue to do so appropriately.
Madam Chair,

We have long highlighted the importance of adequate resources in support of the IAEA’s crucial monitoring role in Iran. The United States welcomes the numerous pledges of financial support for the IAEA’s verification and monitoring efforts in Iran, augmenting regular budget resources. We must all continue to ensure that while pursuing the IAEA’s vital responsibilities in Iran, we are also able to support fully the Agency’s other essential tasks globally in safeguards, security, safety, and the peaceful uses of nuclear energy.

The Board must remain seized of any newly emerging safeguards issues. It is essential that the Acting Director General promptly report to the Board on Iran’s inadequate cooperation with the IAEA’s verification and monitoring activities, and on any new safeguards questions, consistent with established safeguards practices.

With these comments, the United States welcomes the Acting Director General’s reports contained in documents GOV/2019/32 and GOV/INF/2019/10, and requests that they be made public.