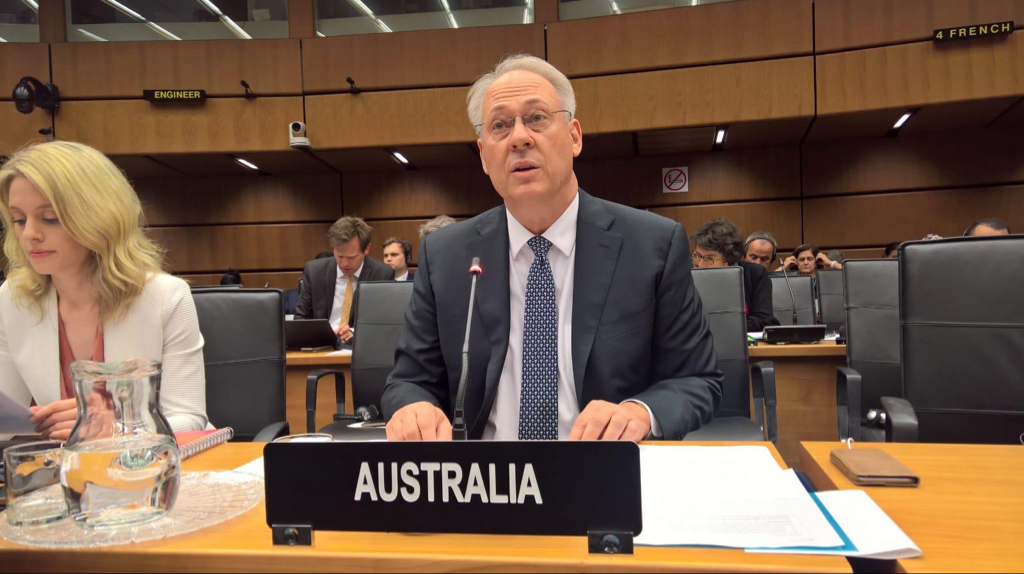 HE Dr Brendon Hammer, Resident Representative of Australia to the IAEA, delivers a joint statement on behalf of the United States and other members of the Group of Friends of Women in Nuclear on June 12, 2019.

As prepared for delivery by HE Dr Brendon Hammer, Resident Representative of Australia to the IAEA

Australia – as Co-Chair – is pleased to deliver this statement on behalf of the Group of Friends for Women in Nuclear.  As a group, we share the common objective of reaching parity in the representation of women in the IAEA Secretariat.

This June Board meeting marks two years since the establishment of the Group, which today comprises 32 members.

I am happy to report that our membership now includes:  Afghanistan, Argentina, Australia, Austria, Canada, Colombia, Costa Rica, Denmark, Finland, France, Germany, India, Ireland, Japan, Jordan, Lithuania, Mexico, the Netherlands, New Zealand, Norway, Paraguay, the Republic of Korea, Slovakia, Slovenia, South Africa, Spain, Sweden, Turkey, the United Kingdom and the United States of America, and also a special welcome to Belgium and Malaysia, which have both joined since the last Board meeting.

At the Group of Friends’ most recent meeting – hosted on 4 June by Co-Chair Mexico, members highlighted some of the initiatives underway – or already achieved – in taking forward our objectives.  Among these – for example – was recognition of the value of two side events held at the time of the March Board of Governors meeting to take forward the discourse on gender equality objectives.

I’m pleased to report that we had a very constructive meeting and look forward to working further with Mr Aparo and the Safeguards Department.  We also plan – and look forward – to meeting with each of the other IAEA Deputy Director Generals to similarly discuss how to advance gender equity in each of their respective Departments.

The examples above illustrate just some of the ways that the Group of Friends for Women in Nuclear has been active in recent months.  Since the Board last met we have also been pleased to work on 28 May with the International Gender Champions Hub-Vienna Steering Group; to present to a roundtable on 28 May on “Gender and Nuclear Security” hosted by the World Institute of Nuclear Security where we spoke again on the importance of men as advocates and implementers to achieve gender equity in the workplace.  And we have also been pleased to support the Careers for Women in International Organisations conference entitled Innovative Pathways to International Organisations that was held on 31 May.

The Group of Friends has also reached out to the IAEA Chapter of Women in Nuclear – to identify concerns – and to gather ideas from professional women working for the IAEA Secretariat and we were very pleased to promote the Chapter’s workshop entitled “Reflections from the top: how I got here” held at Seibersdorf on 14 May.

The Group acknowledges the commitment and steps taken by the Agency – and the leadership of the Director General – to seek to achieve gender equality at the IAEA including the Agency’s efforts to reform its work environments to make them more accessible to women.

We are encouraged that the Agency has now crossed the 30 per cent threshold in women hired in the professional category or higher.  We are also encouraged by the Agency’s recent creation of a new junior professional officer gender advisor position which will be funded by the United States and which will exclusively assist the Division of Human Resources in making gender-conscious practices a permanent part of the Agency’s standard hiring procedures.

Reaching gender parity at the IAEA remains an important objective on equity grounds alone.  But once again the Group wishes to emphasise the benefits that gender parity can bring in organisational efficiency and effectiveness.

It is today widely recognised that achieving gender equality and parity is not only the right thing to do, but the intelligent thing to do because such parity has been shown to improve overall efficiency and quality of outputs in organisations of all kinds.

The members of the Group of Friends for Women in Nuclear again express their willingness to work together with the Secretariat in order to identify short, medium and long-term actions to encourage girls and women to pursue studies and career paths in nuclear science and technology and to help to ensure the proactive recruitment and retention of women.  We look forward to continuing this work with the Agency.

And in closing let me take this opportunity to remind delegations who share our gender equality goals of the opportunity to join the Group of Friends for Women in Nuclear. If you would like to join, please make your interest known to one of the Group’s Co-Chairs – Australia or Mexico.