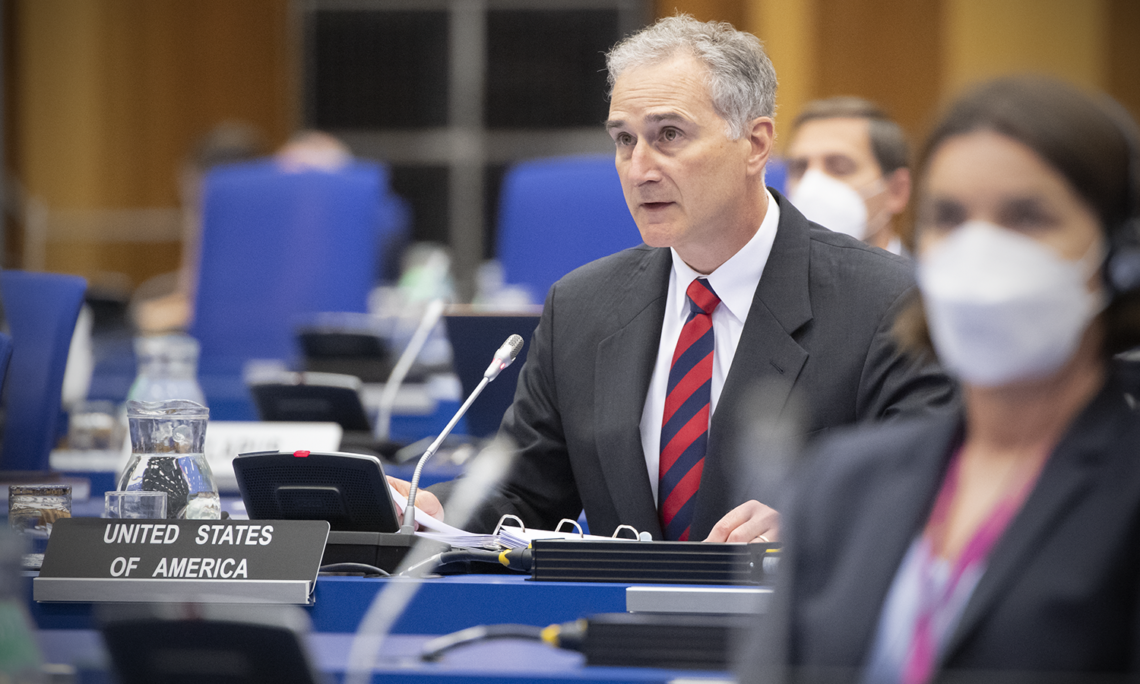 The United States would like to thank Director General Grossi for his latest report contained in GOV/2021/29 and reiterate our full support for the professional and impartial efforts of the Director General and the Secretariat to implement Iran’s Comprehensive Safeguards Agreement. Robust IAEA verification and monitoring – based on equally robust cooperation from Iran – is essential to providing confidence that all nuclear material in Iran remains in peaceful uses, and to providing assurances that there are no undeclared nuclear materials or activities in Iran.

Last June, following Iran’s prolonged denial of access to two undeclared locations, the Board adopted a resolution calling on Iran to fully cooperate with the Agency and to comply with the Agency’s requests without further delay. In March, following reporting from the Director General that the IAEA had detected evidence of nuclear material at those locations, Iran accepted the offer of the Director General for technical discussions with the aim of resolving the IAEA’s open questions. The Director General’s latest report makes clear that, since that announcement—and despite the Board resolution a year ago—Iran has continued to refuse to provide the necessary cooperation. That report notes that environmental sampling results at three locations of concern in Iran are “a clear indication that nuclear material and/or equipment contaminated by nuclear material has been present at these locations.” The current location of this material and equipment is not known. As noted by the Director General, the lack of progress in clarifying these unresolved questions involving potential undeclared nuclear material is seriously affecting the ability of the Agency to verify the correctness and completeness of Iran’s safeguards declarations, as well as its ability provide assurances that all nuclear material in Iran remains in peaceful uses. The Board should be as seriously concerned as is the Director General by these facts.

Questions concerning possible undeclared nuclear material and activities in Iran arise from Iran’s legal obligations under its NPT-required Comprehensive Safeguards Agreement. The fact that these questions remain unanswered after nearly two years is deeply troubling. Although we welcome the ongoing discussions focused on a mutual return to JCPOA compliance and are working intensively to support this effort, we note that Iran’s obligations under its Comprehensive Safeguards Agreement are separate from its JCPOA commitments. They cannot be set aside. Failing to hold Iran to them would both undermine the integrity of the international safeguards system and set a troubling precedent for international efforts to ensure that Iran is adhering to all of its nonproliferation commitments.

We therefore join with others in amplifying the Board’s call on Iran to fully cooperate with the IAEA, including by providing all information and clarifications deemed necessary by the Secretariat to resolve outstanding safeguards issues, and to do so without further delay. Given the length of time that has passed since the IAEA first engaged Iran on these issues, the lack of progress reported by the Director General, and the serious nature of the questions related to potential undeclared nuclear material that still may exist in Iran today, Iran’s cooperation with the IAEA is essential, and must be nothing less than full and immediate. The cooperation must include verifiable explanations as to the origins and current location of the nuclear material or equipment that sampling indicates was present at the three undeclared locations. We note that the DG’s report indicates Iran and the IAEA are in discussions to schedule an additional meeting on these issues later this month. We heard a similar promise of engagement when we met last in March and are increasingly troubled by the lack of substantive follow-through on that promise. Iran should avail itself of this latest opportunity to finally address—in substance and with technical credibility—the serious safeguards concerns now before the Board and to ensure that we do not next meet with a similarly disappointing report before us. It is only substantive cooperation that will lead to removing these concerns from Board consideration, an outcome we would join others in welcoming.

We also note with serious concern developments related to Iran’s decision to suspend implementation of provisions of its Additional Protocol as of February 23. According to the DG’s report, Iran has not provided updated declarations and the Agency was not able to conduct any complementary access under the Additional Protocol to any sites and locations in Iran during this reporting period. Iran’s regrettable actions have significantly reduced the IAEA’s access needed to establish confidence in the absence of undeclared nuclear material and activities, and it has deprived the Agency of its ability to verify that all nuclear material in Iran remains in peaceful uses. Furthermore, as noted by the Director General, Iran’s decision to cease implementing modified Code 3.1 of the Subsidiary Arrangements to its Comprehensive Safeguards Agreement is contrary to its legal obligations and is therefore another matter of deep concern. The modified Code 3.1 is legally binding on Iran and cannot be unilaterally modified or suspended.

We understand that the Director General’s concerns are widely shared by Board members and note the Board’s responsibility to support the Secretariat’s efforts to fulfill its essential safeguards verification mandate in Iran. The Board has a responsibility to take appropriate action to preserve the integrity of the international safeguards system upon which we rely for assurances in Iran and worldwide.

In this regard, we appreciate the IAEA’s detailed reporting and encourage the DG to continue to provide timely reporting on the progress in resolving IAEA safeguards verification concerns in Iran. We request that such reporting take place sufficiently in advance of the September Board so that the Board may consider any necessary response. We also request the Agency’s report on implementation of the NPT Safeguards Agreement with Iran be made public, consistent with longstanding practice.