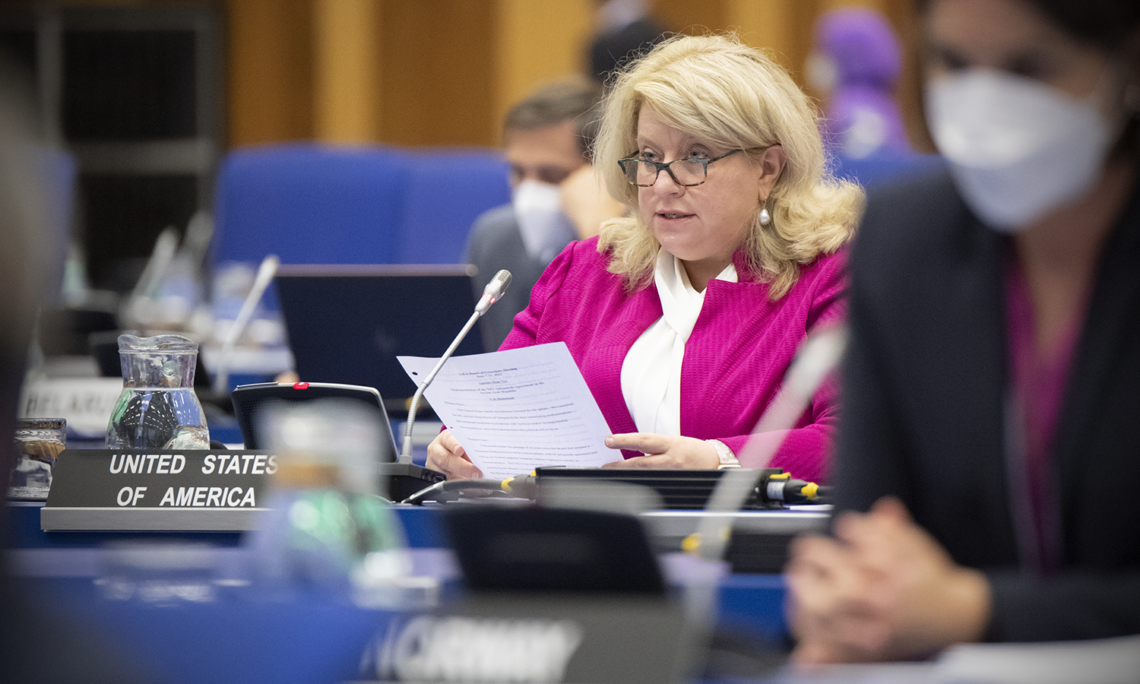 Acting Deputy Chief of Mission Leslie Hayden delivers the U.S. statement on the implementation of the NPT Safeguards Agreement in Syria to the IAEA Board of Governors, Vienna, Austria, June 10, 2021. (USUNVIE/Colin Peters)

IAEA Board of Governors Meeting, Agenda Item 6(e): Implementation of the NPT Safeguards Agreement in the Syrian Arab Republic

The United States thanks the Director General for his update. We commend the DG and the Department of Safeguards for their unwavering professionalism and continued readiness to cooperate with Syria to resolve its longstanding noncompliance, once Syria demonstrates the political will to do so.

This month marks the passage of 10 years since this Board first adopted a resolution finding Syria to be in noncompliance with its safeguards agreement and calling on Syria to urgently cooperate with the Agency to remedy its noncompliance. The IAEA has repeatedly reaffirmed the technical assessment underlying the Board’s resolution that the facility destroyed in September 2007 in the Syrian province of Dair Alzour was very likely a nuclear reactor that should have been declared to the IAEA, and which had features comparable to the gas-cooled, graphite-moderated reactor at Yongbyon in the DPRK. The Agency’s findings in this regard point to a clear and unsettling reality – that, as of 2007, Syria was working with the DPRK to build an undeclared reactor ideally suited to produce fissile material for nuclear weapons.

Despite the seriousness of these concerns, Syria’s response over the past decade has been neither urgent, nor cooperative. The DG’s September 2020 report confirms that Syria has not engaged substantively with the Agency about the Dair Alzour facility and related sites since 2008. Instead, Syria has spent over a decade stonewalling the Agency’s investigation, while proffering a litany of unconvincing half-truths and conspiracy theories to divert attention and discredit the Agency’s technical conclusions. For our part, the United States continues to have full confidence in the independence, impartiality, and professionalism of the IAEA Secretariat in drawing safeguards conclusions based on all the information available to it. We urge all Member States to reject efforts by Syria and its patrons to shift blame and distract from Syria’s failure to fulfill its obligations.

Despite the passage of time and Syria’s perennial intransigence, we must not lose sight of the ongoing importance of this issue. The imperative for Syria to address all of the IAEA’s outstanding questions about its undeclared activities is not merely about resolving interesting historical questions or checking a procedural box. As long as safeguards-relevant questions remain regarding the possibility of undeclared nuclear material or fuel cycle activities in Syria associated with the clandestine reactor project at Dair Alzour, the IAEA will not be in a position to provide necessary assurances to the international community that the Syrian nuclear program is exclusively peaceful today and into the future. Resolving Syria’s safeguards noncompliance is thus crucial to preserving the credibility of the IAEA safeguards system and upholding the integrity of the Nuclear Non-Proliferation Treaty. In this regard, we recall the joint statement issued by 52 Parties at the 2019 NPT Preparatory Committee meeting, which emphasized that full compliance with obligations under the NPT and IAEA safeguards agreements is at the heart of the shared security benefits enjoyed by all NPT Parties, and called on Syria to cooperate with the IAEA without further delay.

The time for delay, obfuscation, and empty rhetoric has long passed. The DG has reiterated his willingness to work with Syria. We strongly urge Syria to provide the Agency with access to all sites, information, materials, and persons necessary to resolve questions about the peaceful nature of its nuclear program, including the three sites identified by the Agency as having a functional relationship to the Dair Alzour site. Until Syria provides such cooperation, it is essential that the Agency continue to keep the Board apprised of developments, and the Board must remain seized of this issue and consider further steps as necessary, including potential action under Article XII.C of the Statute and Articles 18 and 19 of Syria’s safeguards agreement.

We look forward to continued updates from the DG and request that this issue remain on the agenda for the Board’s next regularly scheduled meeting, and for all future meetings until the Agency is able to confirm that Syria’s nuclear program is exclusively peaceful and the Board has determined that Syria’s noncompliance has been resolved.