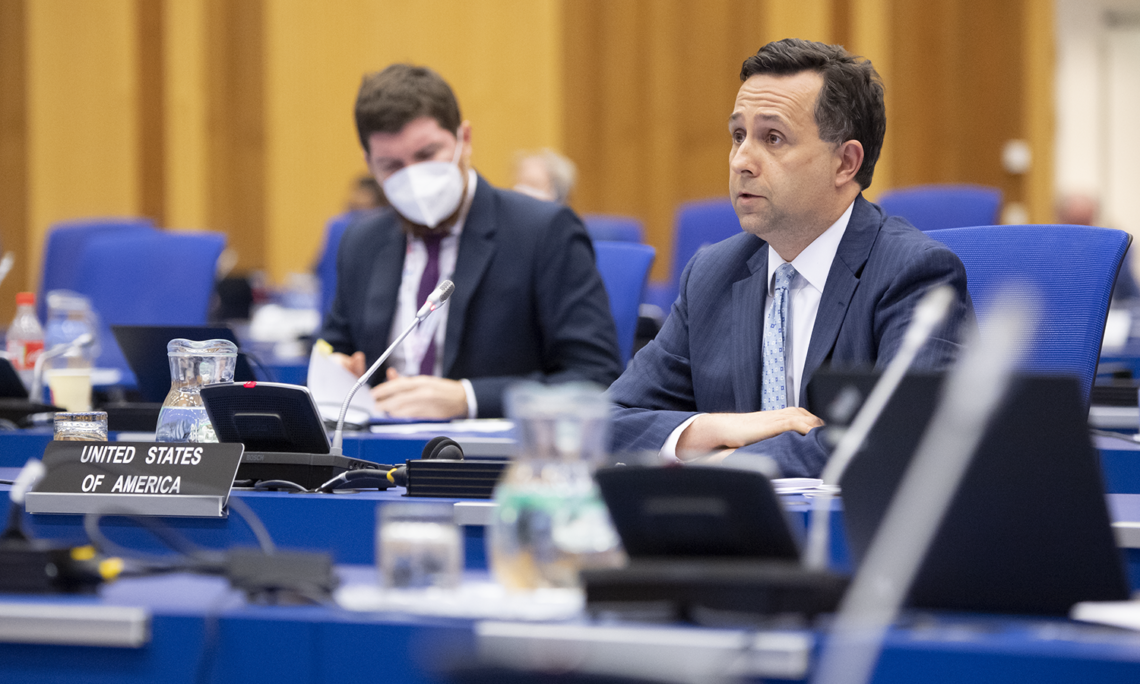 Acting IAEA Counselor Edward Canuel delivers the U.S. statement on the application of IAEA safeguards in the DPRK at the IAEA Board of Governors meeting, June 9, 2021. (USUNVIE/Colin Peters)

IAEA Board of Governors Meeting, Agenda Item 6(d): Nuclear Verification – Application of Safeguards in the DPRK

The Democratic People’s Republic of Korea’s unlawful nuclear weapons and ballistic missile programs continue to present a serious threat to the security of the United States and the rest of the world and a direct challenge to the global nonproliferation regime. As President Biden said in his April 28 speech to Congress, we will work closely with our allies to address this threat through diplomacy as well as stern deterrence.

After having completed a thorough review of our policy towards the DPRK, the United States remains committed to the ultimate goal of complete denuclearization of the Korean Peninsula. We have laid out a calibrated, practical approach that will explore diplomacy with North Korea to make tangible progress that increases the security of the United States and the rest of the world. Our efforts will build upon the 2018 Singapore Joint Statement and other prior commitments, including those in the 2005 Six-Party Talks Joint Statement, and we hope that the DPRK will come to the table to discuss our respective goals and concerns. The question is whether Pyongyang will choose to engage.

In the meantime, we must continue to collectively demand that the DPRK fully comply with its international obligations and commitments, particularly regarding its UN-prohibited nuclear and ballistic missile programs. We stress also the importance of all UN Member States fully implementing their sanctions obligations under relevant UN Security Council resolutions and taking decisive action to prevent sanctions evasion.

Finally, Madam Chair, we appreciate and support the IAEA’s sustained attention to this issue and its continued efforts to maintain readiness to resume monitoring and verification activities in the DPRK.