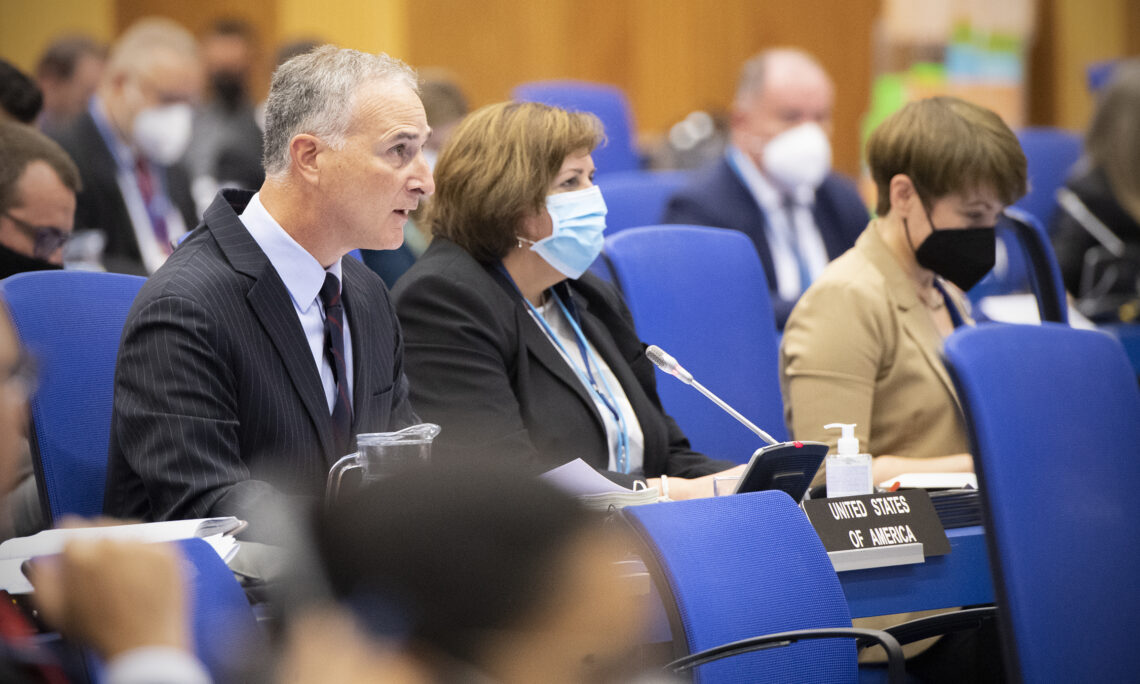 The United States once again commends Director General Grossi, Deputy Director General Aparo, and the Secretariat for their continued professional and impartial efforts to implement Iran’s Comprehensive Safeguards Agreement. Robust IAEA monitoring and verification is essential in order to establish and maintain strong international assurances as to the exclusively peaceful nature of Iran’s nuclear program. However, as Director General Grossi’s report contained in GOV/2021/42 makes clear, Iran’s failure to provide required clarifications in response to the Agency’s questions concerning the correctness and completeness of Iran’s safeguards declarations is seriously affecting the ability of the IAEA to provide such assurances. These questions relate to Iran’s safeguards obligations and are separate from its JCPOA nuclear-related commitments.

We share the Director General’s deep and increasing concern that the Agency has found indications that nuclear material had been present at three undeclared locations in Iran, that Iran has yet to provide the necessary explanation for the presence of such material at these locations, that the current locations of the nuclear material are unknown to the Agency, and that Iran has not answered the Agency’s questions with regard to the fourth undeclared location with connections to a natural uranium metal disc, the whereabouts of which is also not confirmed.

Iran’s decision to cease implementing the provisions of its Additional Protocol only adds to our serious concern. This decision has significantly reduced the information and access available to the IAEA as it seeks to provide credible assurances of the absence of undeclared nuclear material and activities in Iran. Without Iran implementing its Additional Protocol, the Agency cannot provide the broad assurance to the International Community that all nuclear material in Iran remains in peaceful uses. Furthermore, as noted by the Director General, Iran’s decision to cease implementing modified Code 3.1 of the Subsidiary Arrangements to its Comprehensive Safeguards Agreement is contrary to its legal obligations and is therefore another matter of deep concern. As the Director General has made clear, modified Code 3.1 is legally binding on Iran and cannot unilaterally be modified or suspended.

As the Board of Governors stated clearly in its resolution adopted in June 2020, Iran must fully cooperate with the IAEA without further delay. The cooperation that is necessary includes Iran providing the required clarifications in response to the IAEA’s requests related to the possible undeclared nuclear materials and activities in Iran. Compliance with safeguards obligations is a cornerstone of the nonproliferation regime that must be protected by the IAEA Board, whether in connection with Iran or any other state.

The renewed dialogue now opened between Iran and the Agency must lead to substantive actions, not just empty promises, and those actions must be provided on an urgent basis. Iran should fully uphold the understandings outlined in the Joint Statement, and must provide the required clarifications necessary to resolve these outstanding safeguards matters without further delay. As the Director General has said, the necessary cooperation must include credible and verifiable explanations as to the origins and current location of the nuclear material and/or equipment that sampling indicates was present at the three undeclared locations, as well as information on the location and activities associated with the natural uranium metal disc connected to the fourth undeclared location.

The Board of Governors will be watching closely in the days and weeks ahead as to whether Iran is providing the required cooperation. The United States will stand ready, with other Board members, to take appropriate action if the Director General reports that Iran’s cooperation remains insufficient. The Board has a responsibility to take such action and to ensure and maintain the efficacy and integrity of the international safeguards system, which is a cornerstone of the NPT regime, and upon which we all rely for assurances of the peaceful nature of states’ nuclear programs.

Finally, Madam Chair, I note that at the September 9 technical briefing Member States received a brief update regarding the issue of inappropriate treatment of IAEA inspectors by Iranian security officials at nuclear facilities in Iran. Harassment of IAEA inspectors is absolutely unacceptable and any repeat of such conduct would be of serious concern. The safety and well-being of IAEA inspectors must be one of this Board’s highest priorities, along with ensuring inspectors can do their work in an atmosphere free of intimidation. We stand shoulder-to-shoulder with the Director General’s efforts to address any such issues. Should additional incidents occur, the United States stands ready to work with other Board members to take appropriate action in support of the cadre of dedicated professionals in the IAEA inspectorate on whom we all rely.

We encourage the Director General to continue to provide timely reporting on the progress in resolving outstanding safeguards verification concerns in Iran. We request that such reporting be issued as warranted, and, at a minimum, sufficiently in advance of the November Board so that the Board may consider any necessary response. We also request the Agency’s report on implementation of the NPT Safeguards Agreement with Iran contained in document GOV/2021/42 be made public, consistent with longstanding practice.