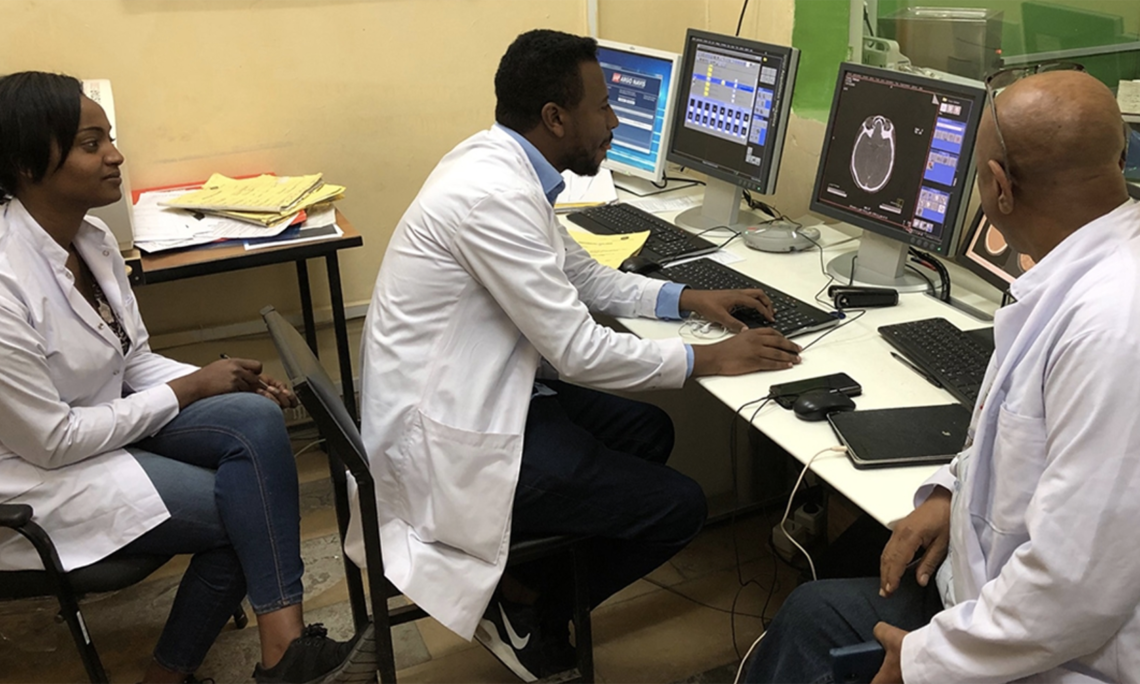 A doctor in Ethiopia uses a CT simulator donated by the IAEA through the Peaceful Uses Initiative to analyse a scan of a patient. (Photo: M. Gaspar/IAEA)

The United States thanks the Secretariat for its useful report on the IAEA’s activities related to nuclear science, technology, and applications in 2019.

Providing voluntary funding through the IAEA is one of the concrete ways the United States demonstrates its commitment to promoting the peaceful uses of nuclear energy in accordance with Article IV of the NPT and in support of development goals. We seek to promote the fullest possible exchange of nuclear technology for peaceful purposes called for in the NPT. We emphasize the value of promoting high standards of nuclear safety and security, alongside rigorous and effective nonproliferation measures, to promote real and sustainable progress.

Since 2010, we have provided the IAEA voluntary contributions totaling more than $400 million to promote peaceful nuclear activities, including $106 million to the IAEA Peaceful Uses Initiative (PUI). We urge others to contribute through the PUI and other voluntary funding mechanisms, and to help the Secretariat identify and pursue funding opportunities through non-traditional donors and partners.

We note favorably the continued cooperation among the IAEA, the UN Food and Agriculture Organization, and other partners to control tsetse flies that spread parasitic diseases in livestock and humans, fruit flies that threaten produce, and mosquitos that spread diseases in humans. We strongly support the FAO-IAEA Joint Partnership as an innovative model of interagency cooperation. We further recognize the importance of IAEA work to provide expert assistance and support technology transfers to Member States by improving veterinary laboratory capacities for the diagnosis of transboundary diseases, including avian influenza, Ebola and African swine fever.

The United States fully supports the IAEA’s efforts to renovate its Nuclear Applications Laboratories that will enhance the Agency’s capacity to respond to Member States needs in areas that include health, agricultural productivity, food safety, the environment, and other areas included in the Nuclear Technology Review. We are pleased to have provided a total of approximately $16.8 million to the ReNuAL/ReNuAL+ project.

The United States has the largest nuclear power program in the world. We have significant capabilities and a long, successful history of developing and exporting nuclear reactors that meet the highest standards for safety, security and nonproliferation.

New construction is ongoing in the United States. Two new Westinghouse AP1000 reactors, which use the most advanced and safest large light-water reactor technology in operation today, are under construction at the Vogtle nuclear power plant in Georgia and the U.S. government is supporting the development and siting of the United States’ first small modular reactor designed by NuScale, with anticipated operation and commercial availability by 2026. We believe SMRs will be transformative due to their modular design and scalability, will more easily integrate with renewable energy sources and offer a broad range of applications beyond electricity generation, including desalination and process heat for industry.

With these comments, the United States takes note of GOV/2020/4 and requests that it be transmitted to the General Conference.