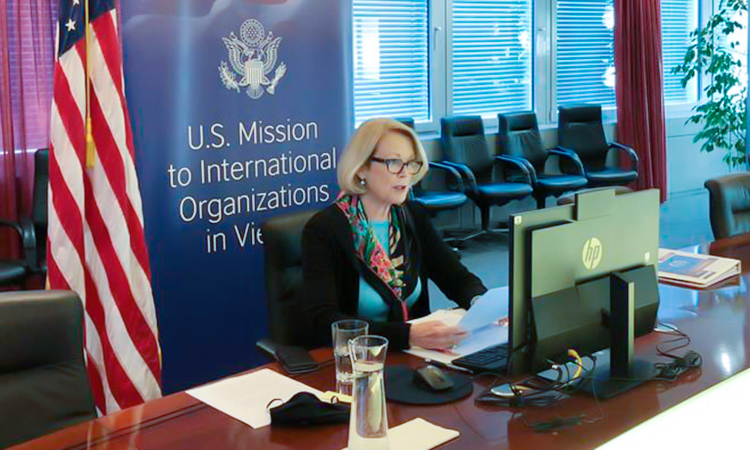 IAEA Board of Governors Meeting, Agenda Item 3: Verification and Monitoring in Iran

The United States extends our appreciation to the Director General, the Deputy Director General for Safeguards, and their staff for their continued professionalism in carrying out the Agency’s critical responsibilities with respect to Iran. We welcome the Director General’s November 11th report on verification and monitoring in Iran. Thorough, factual, and timely reporting remains essential.

One year ago, the Board met in special session to address an urgent matter: the detection of chemically-processed uranium particles at an undeclared location in Iran. The Acting Director General concluded this was “an indicator of possible undeclared nuclear material and activities.” He also underscored the Secretariat’s engagement with Iran had been ongoing since January 2019. Now, nearly two years later, the Director General reports that Iran’s responses remain “unsatisfactory” and “not technically credible.” Simply put, after all this time, Iran’s explanations are not consistent with the evidence. That’s a problem.

The Director General’s report also notes that Iran’s “not technically credible” explanations relate to “the presence, at the location in Iran not declared to the Agency, of isotopically altered particles of low enriched uranium, with a detectable presence of Uranium 236.” No one should mistake what is being conveyed here: whatever nuclear material left such traces was very likely enriched or irradiated. This raises a whole new series of questions about where such material came from and what Iran may still be hiding. It should be of the utmost concern to all Board members.

Upholding the safeguards regime requires that all states comply with their safeguards obligations in good faith. Iran’s failure to resolve these concerns, after almost two years of engagement, is absolutely unacceptable. Iran, or any other state under safeguards, cannot be allowed to revise its explanations indefinitely.

As the DG’s opening remarks made clear, multiple safeguards investigations in Iran remain open and unresolved. In March, the Director General reported the Agency’s efforts to address these concerns. In particular, he highlighted Iran’s refusal to grant required access to two locations where the Agency is investigating the possible use or storage of nuclear material. At both locations, the Director General noted indications of activities consistent with sanitization. Iran’s extended denial of access under the Additional Protocol to these locations was unprecedented. In June, this Board called on Iran to cooperate fully and without further delay. Unfortunately, Iran still did not provide access until months later, after refusing to do so for well over half a year.

In addition, the IAEA continues to investigate the possible presence of undeclared uranium metal at yet another undeclared location in Iran between 2002 and 2003. This is particularly concerning given the potential use of uranium metal – even in small quantities – in nuclear weapons research and development. For all these matters, the key question remains outstanding: if nuclear material was present, where is it today?

These are not historical matters. They are core safeguards concerns regarding potential undeclared nuclear material in Iran today. The Director General’s opening statement underscored that they remain unresolved. Let us be clear, the presence of undeclared nuclear material in Iran would be of serious proliferation concern. This is particularly true given Iran’s history of pursuing nuclear weapons. These matters cannot be dismissed or discounted if the Board is to have any confidence in the current absence of undeclared nuclear material and activities in Iran. We therefore look forward to the DG’s continued timely reporting on these issues. This Board should be firm in demanding that Iran provide full and timely cooperation.

At the same time that the Director General investigates these significant, ongoing safeguards concerns, Iran has continued to expand its proliferation-sensitive nuclear activities. Iran continues to add to its enriched uranium stockpile and to enrich uranium at the Fordow facility, the fortified, underground bunker Iran originally constructed in secret. There is simply no legitimate reason for Iran to enrich uranium at such a facility. Iran also continues to produce heavy water at a plant originally built to supply a reactor suited to produce weapons-grade plutonium. And as the Director General recently reported, Iran continues to conduct advanced centrifuge work, including the enrichment of uranium using advanced, IR2-M centrifuges at the underground Natanz facility. Iran should reverse these steps immediately.

Iran’s actions are transparent attempts at extortion. We have made clear they will neither resolve the current impasse nor bring Iran sanctions relief. It would be a mistake to reward such tactics with economic appeasement. The Trump Administration has sought a comprehensive deal with Iran that ends its destabilizing behaviors and fully integrates Iran into the international community. We have made clear that to achieve a full normalization of relations and the lifting of sanctions, Iran must be willing to end its destabilizing behavior and take lasting steps that deny it any pathway to nuclear weapons. We continue to believe this is the most sustainable path forward.

We have long highlighted the importance of ensuring adequate resources in support of the IAEA’s verification and monitoring role in Iran. We welcome the contributions of financial support for these efforts. We must also continue to ensure our strong support for the Agency’s other essential global tasks in safeguards, security, safety, and the peaceful uses of nuclear energy.

With these comments, the United States welcomes the Director General’s reports contained in documents GOV/2020/51, GOV/INF/2020/15, and GOV/INF/2020/16 and requests that they be made public, consistent with longstanding practice.