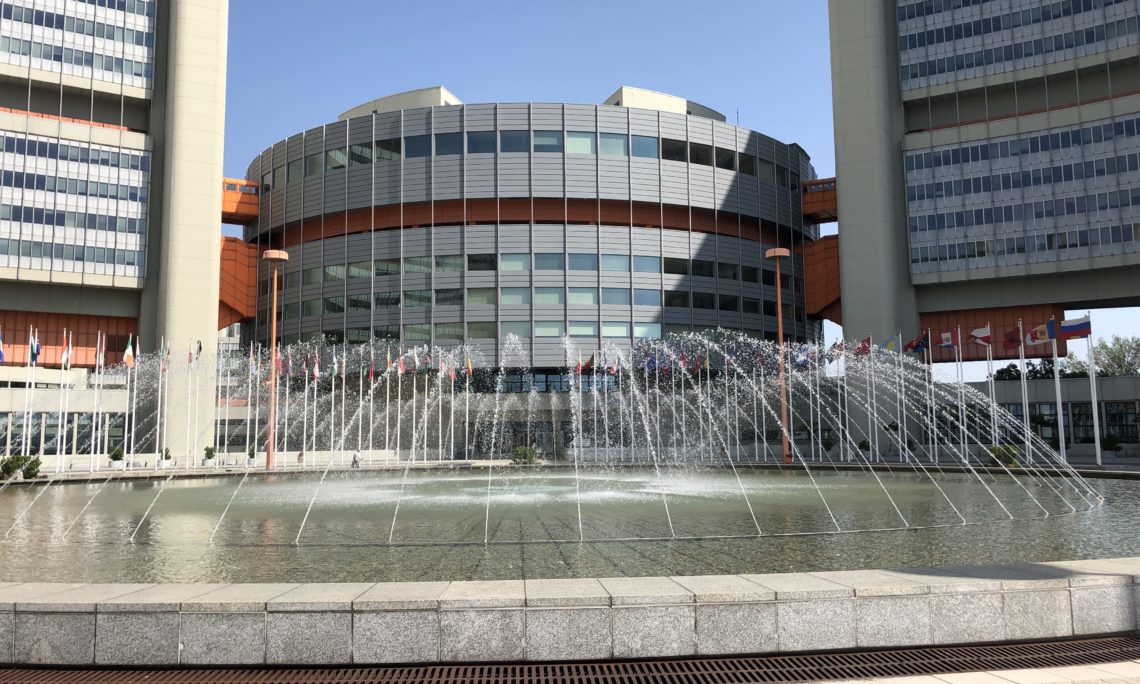 Main courtyard of the Vienna International Center in Vienna, Austria, home of UN organizations and the IAEA.

U.S. Statement on Agenda Item 6(b): Application of Safeguards in the Democratic People’s Republic of Korea

Since committing to work towards complete denuclearization at the June 2018 Singapore summit, the DPRK has yet to take significant, concrete steps to demonstrate that it is serious about delivering on those commitments.  When President Trump met Chairman Kim again in Hanoi last winter in an effort to make progress on the foundation established in Singapore, we narrowed the gap on a number of issues but still did not reach an agreement on fundamental issues related to achieving the final, fully verified denuclearization of the DPRK.

In Hanoi, we reiterated our understanding of what final, fully verified denuclearization of the DPRK entails and what would constitute meaningful, concrete progress towards this goal.  Regrettably, the DPRK’s position fell far short of that understanding, as it insisted upon immediate relief from UN economic sanctions before taking significant action to meet its international obligation to end its nuclear program, as set forth in a series of longstanding UN Security Council resolutions.

Despite these setbacks, the door remains open for continued discussions and the United States remains ready to proceed—simultaneously and in parallel with denuclearization—with concrete steps to transform the U.S.-DPRK relationship and establish a stable peace on the Korean Peninsula.  We look forward to helping build a bright economic future for the North Korean people, the region, and the world.

North Korea’s continued development of its unlawful nuclear weapons and ballistic missile programs, and its proliferation activities pose an unacceptable threat to the international community.  As negotiations continue between the United States and North Korea, we continue to ask every country to maintain diplomatic and economic pressure on the DPRK.  Relevant DPRK UN Security Council resolutions remain in full effect, and UN Member States are bound by the obligations they impose.  Existing UN Security Council resolutions have been effective in bringing North Korea to the negotiating table and must be maintained to continue pressuring North Korea to negotiate.

We appreciate the Agency’s continued efforts to monitor the DPRK’s nuclear program and to strengthen its readiness to resume monitoring and verification activities in the DPRK if called upon.  We also continue to share the Director General’s troubling assessment of the DPRK’s unlawful nuclear program and its continued violations of relevant UN Security Council resolutions.  Although we stand ready to engage the DPRK in constructive negotiations, there can be no wavering from our collective demand that the DPRK fully comply with its international obligations and commitments, and our collective determination to maintain pressure on the North Korean regime.  We remain ready to proceed, in parallel with denuclearization, with concrete steps to build upon progress made in Singapore and Hanoi and to work towards a brighter future that the DPRK seeks. However, until we realize final, fully verified denuclearization, the international community must remain united:  Sanctions will remain in place, and will be fully enforced.