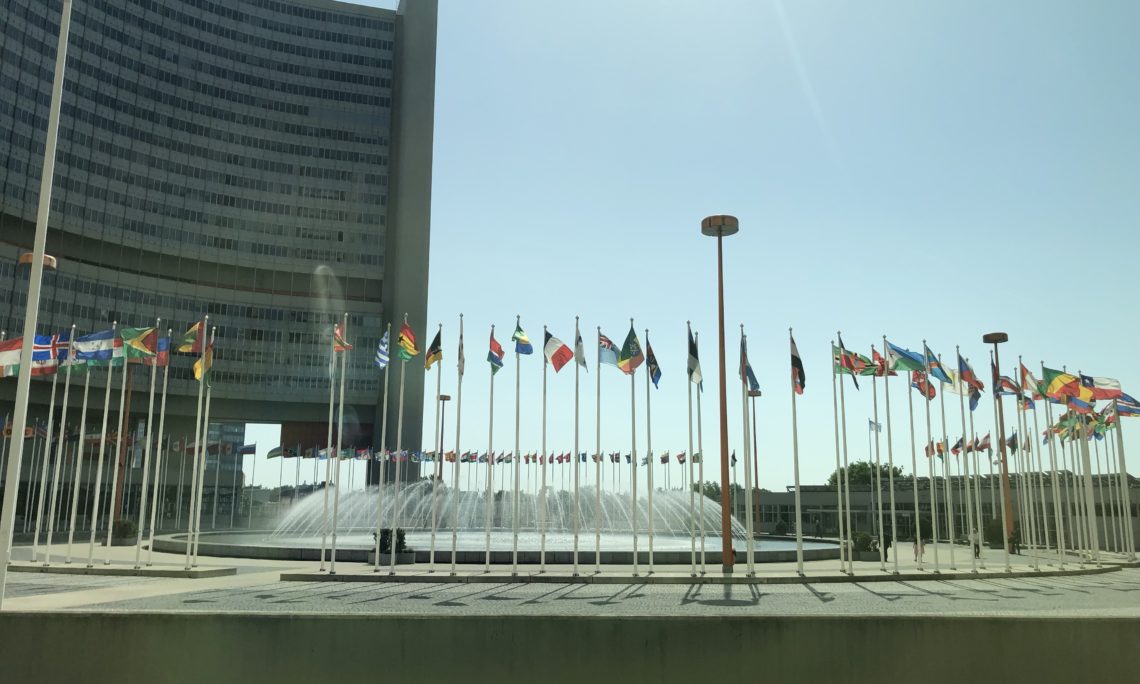 View of Vienna International Center courtyard as seen from inside the IAEA.

We thank the DG for his update and for his commitment to resolving Syria’s safeguards noncompliance.  We applaud the DG and the Department of Safeguards for their professionalism in the face of a decade of obstruction and disparagement by the Assad regime and its patrons.

Nearly eight years have passed since the Board, acting on the basis of the IAEA’s technical assessments, found Syria to be in noncompliance with its safeguards agreement under the NPT.  Since that time, the facts surrounding Syria’s noncompliance have remained clear, unambiguous, and – sadly – unchanged.  For eight straight years, the Agency has reaffirmed its assessment that the Syrian facility at Dair Alzour was very likely a nuclear reactor that should have been declared to the IAEA, and which the Agency assessed to have features comparable to the gas-cooled, graphite-moderated reactor at Yongbyon in the DPRK.  The IAEA has repeatedly rejected Syria’s assertions regarding the Dair Alzour site, explicitly stating that the facility “could not have served the purpose claimed by Syria.”  The Agency’s technical findings in this regard were based on a broad spectrum of information, including on-site verification and environmental sampling, commercial satellite imagery, procurement information, and information provided by Member States.

Over the past eight years, Syria has failed to cooperate with the Agency to address these concerns or to mount even a half-serious effort to refute the Agency’s conclusions about the Dair Alzour facility and corroborate its own discredited claims.  The Assad regime has failed to take any meaningful steps to cooperate with the Agency while repeating a stale array of unfounded conspiracy theories, half-truths, and outright misinformation to mislead the Board.  Even a casual reading of the DG’s reporting on this issue over the past decade will disprove most of the self-exonerating arguments put forward by Syria and its patrons.

For example, Syria and its defenders assert that Syria has cooperated with the IAEA to address its concerns.  In fact, over the past decade Syria has shown no real interest in vindicating its claims or disproving the Secretariat’s fact-based assessments.  The DG’s latest report from August 2018 and his opening statement earlier this week make clear that Syria has provided no new evidence that would call into question the Agency’s assessments regarding the Dair Alzour facility and that Syria has not provided any substantive information to the Agency regarding the Dair Alzour facility or related sites since May 2008 – more than 11 years ago.

Rather than address these clear statements of fact, Syria and its patrons continue to laud Syria’s cooperation, pointing to routine safeguards implementation at Syria’s declared miniature neutron source reactor outside Damascus or to misappropriated references from the SIR.  Such claims are beside the point.  Routine safeguards implementation at declared facilities does nothing to resolve non-compliance by the Assad regime resulting from its undeclared nuclear activities.  To excuse its refusal to cooperate, Syria often points to discussions between Syria and the IAEA in late 2011 on a so-called roadmap for cooperation.  Contrary to Syrian portrayals of this meeting, however the DG has made clear that the discussions between Syria and the IAEA in late 2011 did not produce an agreed path forward.  Rather, Syria had sought to impose unacceptable restrictions on the Agency’s verification activities and was unwilling to address critical questions regarding other sites related to the Dair Alzour reactor.

Syria has also sought to divert attention by spreading false and conspiratorial allegations against other Member States, including the United States.  One of the oldest of these baseless assertions is speculation that the chemically processed particles discovered by the IAEA at the Dair Alzour site were introduced by the munitions used to destroy the facility.  The IAEA has repeatedly rejected this hypothesis as unlikely based on the “morphology and distribution” of the uranium particles found at the site.  The circumstances that brought Syria’s noncompliance to light have no bearing on the technical assessments underpinning the Board’s 2011 resolution.  Syria’s arguments are a cynical effort to shift blame and distract from the urgent need for Syria to address all questions regarding its activities at Dair Alzour and related sites.  Only then will the Agency be in a position to provide assurances that Syria’s nuclear program is exclusively peaceful.

Perhaps most concerning, Syria and its patrons have often sought to discredit and politicize the IAEA’s conclusions relying instead on dubious and unsubstantiated press reporting.  For our part, the United States has full confidence in the independence, professionalism, and impartiality of the IAEA Secretariat in drawing safeguards conclusions based on all the information available to it.  We wish all Member States would adopt a similar approach, rather than calling into question the independence and impartiality of the Agency.

We share the frustration of many in this room regarding the lack of developments on this issue, but there is only one Member State responsible for this delay and one state that can end it.  Syria must cooperate with the Agency without further delay and provide it with full access to all information, sites, materials, and persons necessary to resolve questions about the peaceful nature of its nuclear program.  This includes access to the three sites identified by the Agency as having a functional relationship to the reactor at Dair Alzour.  The lack of progress on this issue should be cause for increased scrutiny – not less.  The conflict and instability in Syria caused by the Assad regime are less and less credible as an excuse for the regime’s failure to cooperate.

This is not merely a historical issue; it is critical to the credibility of the IAEA safeguards system and the NPT itself.  Compliance by all states with their obligations under the NPT and IAEA safeguards agreements is essential to the shared security benefits enjoyed by all NPT Parties.  All cases of noncompliance must be treated with utmost seriousness.  To this end, we welcome the joint statement issued by 52 NPT Parties at the 2019 NPT Preparatory Committee meeting in May, which highlighted that Syria’s ongoing safeguards noncompliance also constitutes noncompliance with the NPT.  We greatly appreciate those who joined the United States in highlighting this important issue.

Until Syria cooperates fully with the Agency to address these concerns, the Board must remain seized of this matter and be prepared to consider further action as necessary, including potential action under Article XII.C of the Statute.  It is vital that the Secretariat continue reporting on the issue.  Reducing the frequency of Agency reporting or removing Syria from the agenda for Board meetings absent any effort on the part of Syria to remedy its noncompliance would send a dangerous signal that states which violate their safeguards obligations need only wait for the Board to lose interest.  We encourage all Board members, and particularly those with influence on the Assad regime, to urge Syria to cooperate fully with the IAEA without delay.

We request that this issue remain on the Board’s agenda for its next regularly scheduled meeting, and for all future meetings until the Agency is able to confirm that Syria’s nuclear program is exclusively peaceful and the Board has determined that Syria’s noncompliance has been resolved.  In the meantime, we look forward to continued updates from the DG.