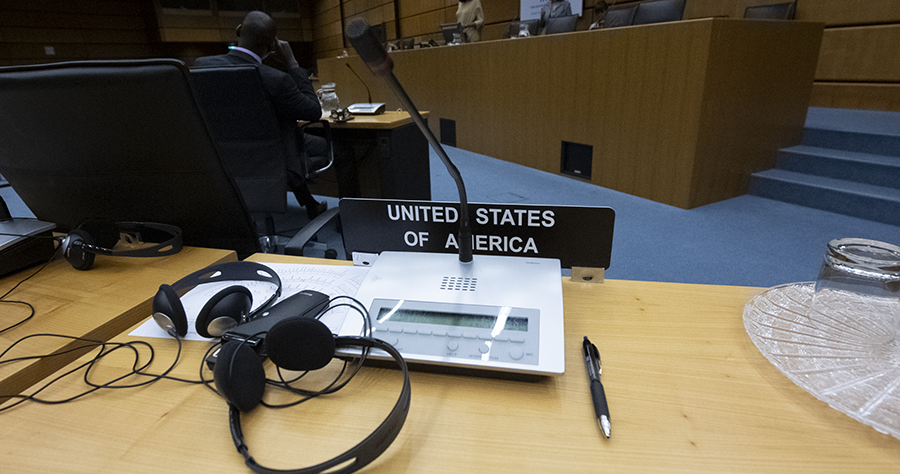 June 2019 IAEA Board of Governors Meeting

U.S. Consolidated Statement on Agenda Item 10: Any Other Business

The United States welcomes the decisions of this year’s NPT Preparatory Committee meeting, which should lay the groundwork for a successful Review Conference next year.  To that end, we look forward to working with all NPT Parties and with the full RevCon Bureau – including President-designate Ambassador Rafael Grossi – over the coming year.  Next year also marks the 50th anniversary of the Treaty’s entry into force, which is an opportunity for all NPT Parties to reflect on what they have accomplished, to realize the shared benefits embodied in the NPT, to reaffirm their commitments to the NPT, and to rededicate themselves to preserving and further strengthening the NPT regime.

The IAEA has played a central role in achieving these goals, by facilitating “the fullest possible exchange” of the benefits of the peaceful uses of nuclear energy, and by contributing to the strong nonproliferation assurances that make that exchange possible.  The United States strongly supports the IAEA in this role, as an essential partner in implementing the NPT.

The United States supports the goal of a Middle East free of weapons of mass destruction and delivery systems, alongside a comprehensive and durable regional peace.  We are committed to supporting the regional states in the pursuit of direct, inclusive dialogue aimed at building trust and addressing the political and security obstacles that have long impeded progress.

We deeply regret that UN General Assembly’s divided decision to convene a conference on a WMD-Free zone despite the lack of consensus support among the regional states, which will only set back prospects for inclusive dialogue toward the goals we all share.  In the absence of participation by all regional states, the United States will not attend the conference and will regard any outcome all illegitimate.  Given the difference of views among Member States regarding this initiative, we also encourage the Agency to carefully consider its approach toward this conference.

We encourage the concerned regional states to abandon misguided multilateral initiatives that lack consensus regional support, and instead pursue direct and inclusive dialogue on practical steps to build trust and promote a regional environment conducive to such a zone.

The United States regrets that the issue of so-called “Israeli nuclear capabilities” has again been raised in the Board, as Israel has not violated any agreements with the IAEA, and is a significant contributor to the Agency’s technical work.  We note that no other Member State is singled out for such unfounded criticism.  Divisive statements aimed at disparaging a state in good standing will not advance our shared goal of a Middle East free of weapons of mass destruction and delivery systems, and can only further perpetuate the deep lack of trust among the regional states.  We urge all regional states to refrain from politically-motivated statements and to instead engage their neighbors directly in an inclusive, cooperative manner about their regional security concerns.

On Nuclear Security, we have an important year ahead of us.  We thank the Ambassadors of Bulgaria and Egypt for their continuing work to develop a strong technical agenda for the February 2020 International Conference on Nuclear Security, and we thank the Ambassador Romania and Panama for initiating the ministerial process.  We urge Member States to attend the Conference at the ministerial level, as high-level participation demonstrates our commitment to building a strong nuclear security regime.

Preparations are also underway for the Review Conference of the Amendment to the Convention on the Physical Protection of Nuclear Material.  We hope all States Parties participate in these meetings, and to that end reiterate our call on the IAEA, as depositary, to provide a common set of reference materials to allow all of us to be adequately prepared.  We will also begin reviews of the Nuclear Security Series Fundamentals and Recommendations this summer.  Given the vast number of Member States that use these important documents, we hope to see active participation at these meetings.