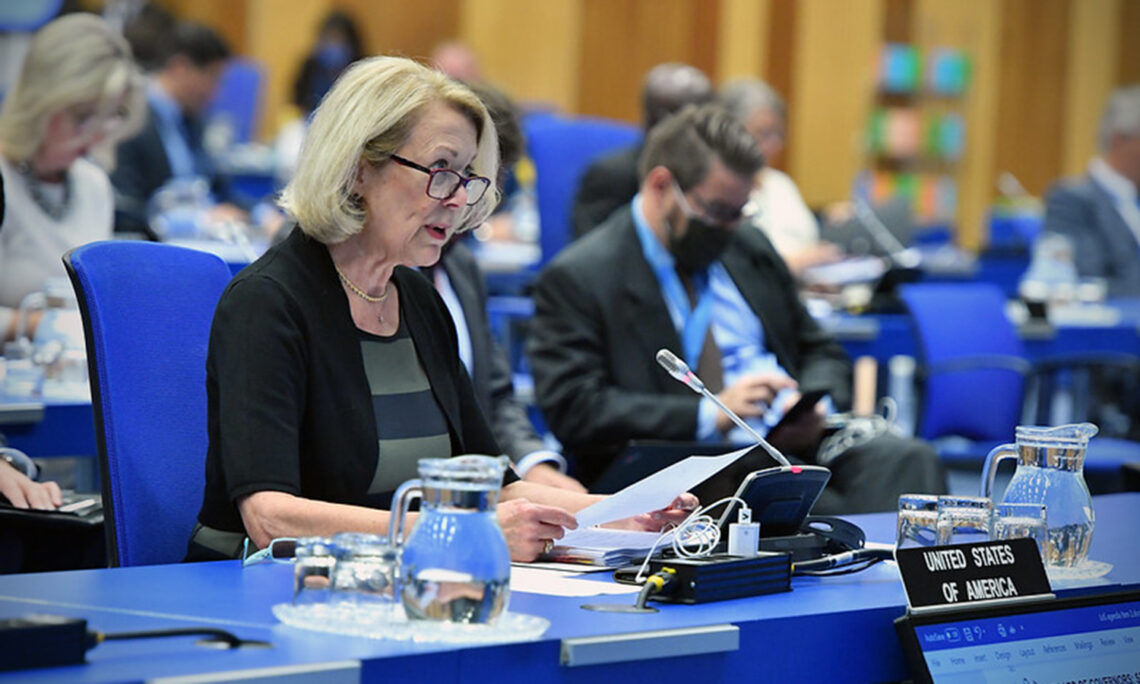 Ambassador Jackie Wolcott at the IAEA Board of Governors Meeting, Sept. 14, 2020. (IAEA/Dean Calma)

We note that Iran has finally agreed to provide required access to locations in Iran related to possible undeclared nuclear material and activities, after refusing to do so for well over half a year. However, providing access is just the first step. I would like to remind the Board of the events that preceded Iran’s recent commitment to finally provide the IAEA with cooperation that is required by its safeguards obligations, cooperation which to date still remains only partial and incomplete.

In March, the Director General issued a safeguards report on Iran – the first of its kind since 2015 – describing the Agency’s efforts over the preceding months to resolve questions regarding possible undeclared nuclear material and activities in Iran, along with Iran’s refusal since January to grant required access to related locations for verification activities. Of course, such questions regarding the possible presence in Iran of undeclared nuclear material and activities are of the utmost urgency and importance, and go directly to Iran’s fundamental obligations under its safeguards agreements. At that time, an overwhelming majority of Board members made clear that Iran’s behavior was unacceptable, and yet in June the Director General was forced to report again that Iran continued to deny access to the Agency and refused to engage substantively on the Agency’s questions.

It is difficult to overstate the seriousness of Iran’s significant delay in addressing these issues. To be clear, it was the first time ever that a country has denied access to the IAEA under the Additional Protocol. Iran’s alarming actions prompted the Board to adopt a resolution in June echoing the Director General’s serious concern. With the resolution, the Board spoke clearly in insisting that Iran must comply with its safeguards obligations, and that the Agency has the unwavering support of the Board to carry out its essential safeguards mandate in Iran.

The Board made clear in June its expectation that Iran would fully cooperate with the Agency without any further delay, including by providing prompt access to specified locations. As we learned from the report before us today, it took Iran more than two months after the Board’s clear directive – and more than seven months after the Agency’s initial request – to finally agree to provide the IAEA access as required by Iran’s safeguards obligations. Moreover, to date Iran has only granted access to one of the two locations specified by the Agency. Even in a pandemic, stalling all the way until the eve of the next meeting of the Board only to provide, at the last minute – and in another case only promise – legally required cooperation to the Agency is not, by any stretch of the imagination, an acceptable response to the Board’s call on Iran in June to provide the Agency with full cooperation without further delay. The Board should be clear this is an unacceptable precedent that cannot become the norm for Iran or any other state with safeguards obligations.

It is also important to recognize that access is only the first necessary step toward resolving the IAEA’s open questions regarding possible undeclared nuclear material and activities at these locations. Let us not lose sight of the seriousness of the underlying concerns that prompted the Agency’s access requests. As the Director General reported in June, the Agency is seeking clarification of questions related to the possible use or storage of nuclear material at both locations, neither of which was declared to the IAEA. These are matters central to the IAEA safeguards regime. Access is intended to provide the Agency with more information to resolve questions but cannot on its own close out those questions.

As reported, one of the locations may have been used for the processing and conversion of uranium ore. This is a necessary step to produce the feed material for a gas centrifuge enrichment plant of the type Iran built originally in secret at Natanz, and in secret again at Fordow, both in underground, fortified facilities. Why would Iran have possibly conducted such activities at a location not declared to the IAEA? If nuclear material was present at the location, where is that material today?

The Director General reported that preparations for the use of neutron detectors may have occurred at the other location, which strongly suggests that nuclear material may have been used or stored there. This, in combination with possible explosive testing at the location, raises deeply troubling questions about possible past nuclear weapons-related work at the location and possible nuclear material that may still be undeclared today. We also know that the IAEA intended this month to conduct verification activities at a declared facility in Iran related to unresolved questions about the possible presence in Iran of undeclared uranium metal that the Agency believes may have been present at an undeclared location between 2002 and 2003. This is particularly concerning considering the potential use of uranium metal – even in small quantities – in nuclear weapons-related research and development.

I will also reiterate that the Director General’s June report on safeguards implementation in Iran notes indications of sanitization at all three undeclared locations. In one case, the Agency observed activities consistent with sanitization from July 2019 onward. Iran’s long history of repeatedly stonewalling the IAEA on open safeguards questions while sanitizing locations in a way that could destroy evidence of possible undeclared nuclear material or activities only increases our concern. Such obstruction seriously undermines the Agency’s ability to conduct effective verification but is, unfortunately, a very familiar tactic by Iran.

Finally, in addition to the open questions addressed in the report before us here, I want to note the IAEA’s ongoing investigation related to chemically-processed uranium particles the Agency detected in February 2019 at yet another undeclared location in Iran. In January 2020, the Agency took environmental samples at two declared nuclear facilities in Iran pursuant to information provided by Iran about the origin of the detected particles. As reported by the Director General, the Agency has recently informed Iran that “further clarifications and information need to be provided and questions need to be answered.” Until this matter is resolved, there is no way to know the origin of the detected material, how much nuclear material is implicated, or where that material is today.

The United States commends the professionalism that the Secretariat has shown in its efforts to engage the Iranians on these troubling issues, including the Director General’s personal interventions to secure required access to specified locations. Moving forward, the IAEA must be allowed to do its analytical work based on its access, and Iran must promptly address any follow-up questions that are raised by that analysis until the IAEA can report that its initial questions have been resolved. Iran should not think for a moment that providing access alone will address and remove the concern expressed by this Board regarding Iran’s cooperation over the past months.

We remain deeply concerned that it took over a year of IAEA engagement, a decision of the Board of Governors, and the threat of further Board action to ultimately compel only partial Iranian cooperation with the IAEA to date regarding access that is required by Iran’s safeguards obligations. Such delay and denial must not become the norm for the international safeguards system. Iran’s full and timely cooperation remains essential.

As we consider the Agency’s unanswered questions about possible undeclared nuclear material and activities in Iran, it is important to note Iran’s past pursuit of nuclear weapons, retention of a vast collection of records from that nuclear weapons program, and continued employment of the scientists who worked on that program under the leadership of its former head. Regrettably, Iran also continues to expand its uranium enrichment program in a transparent attempt to extort and intimidate the international community. All of these factors underscore the urgency with which the IAEA’s safeguards concerns must be resolved.

Finally, I want to emphasize that Iran must be held to the same high standard as every other country; it should not expect special treatment. Iran’s unprecedented denial of required IAEA access in disregard of its legal obligations is wholly unacceptable. It is paramount that the IAEA continue to follow the facts where they lead, and the Board must remain seized of these matters until they are resolved.
Madam Chair,

It also remains critical for transparency that the international community have a common and accurate understanding of the facts as reported by the Director General. I will conclude by taking note of the Director General’s report contained in GOV/2020/47, and requesting that the report be made public, in keeping with past precedent.