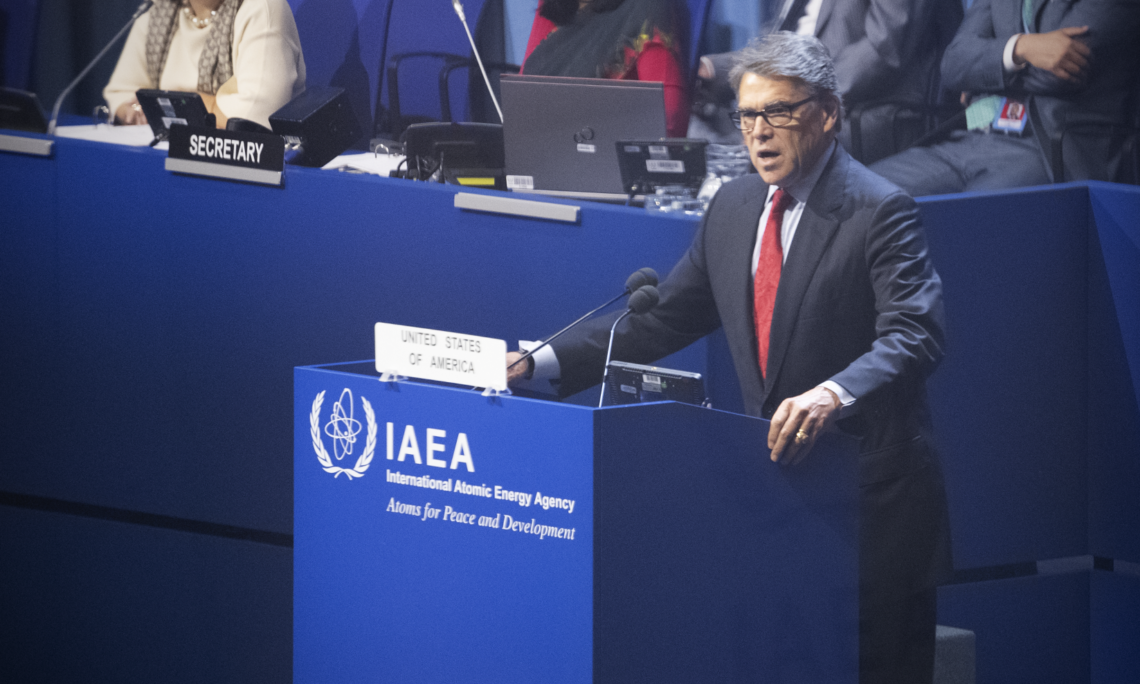 Remarks by The Honorable Rick Perry
Secretary of Energy, U.S. Department of Energy

It is a deep honor to join you today as we open this year’s IAEA General Conference.

Before I relay a message from President Trump with you, I want to reiterate that the United States wholeheartedly condemns Iran’s attacks on the Kingdom of Saudi Arabia, and we call on other nations to do the same. This behavior is unacceptable and they must be held responsible. Make no mistake about it—this was a deliberate attack on the global economy and the global energy market. President Trump has authorized the release of oil from the Strategic Petroleum Reserve if needed and my Department stands ready to respond. Despite Iran’s malign efforts, we are very confident that the market is resilient and will respond positively. Now, please allow me to share a message from President Donald J. Trump.

I send my greetings to the delegates of the 63rd International Atomic Energy Agency General Conference. I also want to extend the deepest condolences to the family, friends, and colleagues of Director General Yukiya Amano. Director General Amano’s diplomacy, wisdom, and influence helped make the world a better and safer place.

The United States supports the IAEA’s important role in ensuring that the peaceful application and growth of nuclear energy, science, and technology continue to contribute to peace and prosperity throughout the world. Nuclear power used responsibly provides a safe, secure, reliable, and carbon-free form of energy. Backed by high standards of safety, security, and nonproliferation, including a Comprehensive Safeguards Agreement with an Additional Protocol, nuclear energy contributes to sustainable development and is a critical part of the global energy future. I welcome the IAEA’s efforts to prepare states to use it responsibly.

The United States remains committed to addressing the threats posed by the nuclear programs of both North Korea and Iran. In recent months, Iranian actions have been of great concern, as Iran continues to use its nuclear program to extort the international community and threaten regional security. My Administration will continue to apply maximum pressure both diplomatically and economically to deny Iran any pathway to a nuclear weapon. We will also continue to work towards final, fully verified denuclearization of North Korea.

For nearly 50 years, the Nuclear Non-Proliferation Treaty has prevented the spread of nuclear weapons. The IAEA, by promoting the responsible use of nuclear energy and ensuring its use remains peaceful, has been critical to this success. The United States stands ready to reinforce and expand that Treaty’s impact, while recognizing its objectives can only be realized when all states comply with their arms control, disarmament, and nonproliferation obligations. We invite the IAEA community to join us in this noble cause.

The United States and the global community must continue to work together to safely and responsibly advance nuclear technology. On behalf of the United States, I wish those attending the IAEA a productive conference and look forward to continuing our work to address these critical issues.

We honor his work, mourn his passing, and thank Acting Director General Feruta for stepping in.

Next year we will mark the 50th anniversary of the Nuclear Non-Proliferation Treaty’s entry into force.

As we approach 2020, I call on every nation to adhere to IAEA’s verification standards.

And let’s rededicate ourselves to stopping the spread of nuclear weapons anywhere, including to Iran.

Together we must insist that Tehran abandon its nuclear ambitions and end its malign behavior. Iran must fully cooperate with the IAEA, and we must maintain our resolve.

That same resolve brought us the Singapore Summit, and hope for full, final, verified denuclearization of the Korean Peninsula, and I might add, new life for North Korea’s people.

Nuclear power must not be harnessed for death, but for the peaceful uses of science, technology, and energy, not for death.

We applaud IAEA not only for supporting those uses but protecting them by promoting the highest standards for safeguarding nuclear and radioactive material.

More than a billion people live in energy poverty, without electricity, and that is unconscionable.

Across the spectrum, from energy to medicine, let’s fully embrace nuclear power for humanity’s good, fulfilling our sacred call.