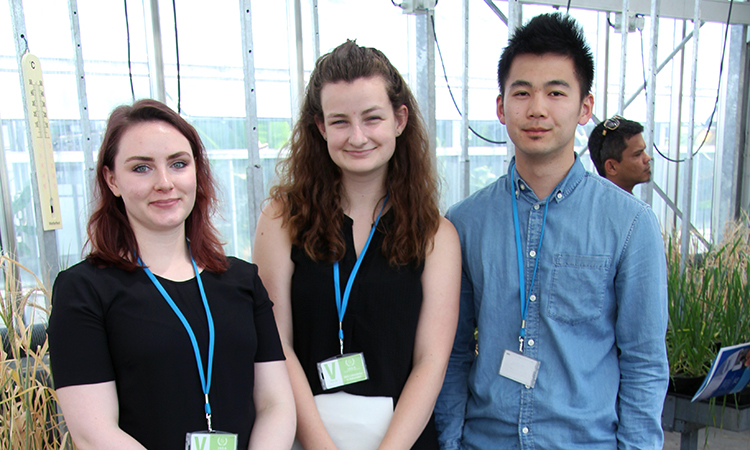 Going on a field trip with ambassadors and diplomats from other countries to nuclear applications laboratories in the Austrian countryside was certainly not something I expected to do as part of my U.S. Mission internship, but it was definitely a highlight.

At the end of the 2017 International Atomic Energy Agency (IAEA) Technical Cooperation Conference, I, along with two of my fellow U.S. interns, signed up for a tour of the IAEA-run nuclear applications laboratories in Seibersdorf, Austria. Prior to the tour we were told that these labs assist IAEA Member States with issues like animal health, food security, and water management.

As an International Affairs major who hasn’t taken a science class in over two years, my first thought was how does one use nuclear technology to improve food security? Wouldn’t radiation kill the crops? Is it safe? Needless to say, my understanding of nuclear technology needed some work.

That morning we, along with 20 or so people from other delegations, hopped on a bus outside of the IAEA and drove 45 minutes to the Seibersdorf Laboratories, where after going through security we were greeted by Laboratory Coordinator Andy Garner, who gave us an overview of the labs.

There are eight total laboratories ranging from the Plant Breeding and Genetics Laboratory to the Dosimetry Laboratory to the Animal Production and Health Laboratory. We walked through six of these laboratories and learned about how nuclear technology is used to sterilize disease carrying insects, enhance crop biodiversity through mutation breeding, and establish food traceability. As it turns out, nuclear technology is used to speed up plant diversity and doesn’t include the side effect of turning them radioactive.

The oddest lab, in my opinion, was the Insect Pest Control Laboratory, where we saw tsetse flies feed off of a specially designed “blood table” that is meant to mimic the texture of human or animal skin to order to elicit a reaction from the flies. Tsetse flies can infect humans and animals with dangerous diseases. The Insect Pest Control Laboratory sterilizes these flies, which can then be released into the wild and help reduce the tsetse population – and thus halt the spread of these diseases. Scientists are also researching ways to apply this technique to mosquitoes to stop the spread of Zika.

Finally we saw the construction site of the new Insect Pest Control Laboratory and the Flexible Modular Laboratory, which is part of a modernization effort of the Seibersdorf Laboratories called ReNuAL. The U.S. Government has contributed nearly €10 million to this project to ensure that these labs remain up-to-date and able to effectively support Member States as they work towards their development goals.

While I still don’t completely understand how nuclear technology works on a technical level, I now have a better sense of just how large the international impact of the IAEA’s work in the field of development truly is.

About the Author – Maria Dudenhoeffer is a rising senior at the George Washington University studying International Affairs with a minor in German. Her favorite part of her internship is tied between having a window-facing desk and being able to sit in on international conferences.