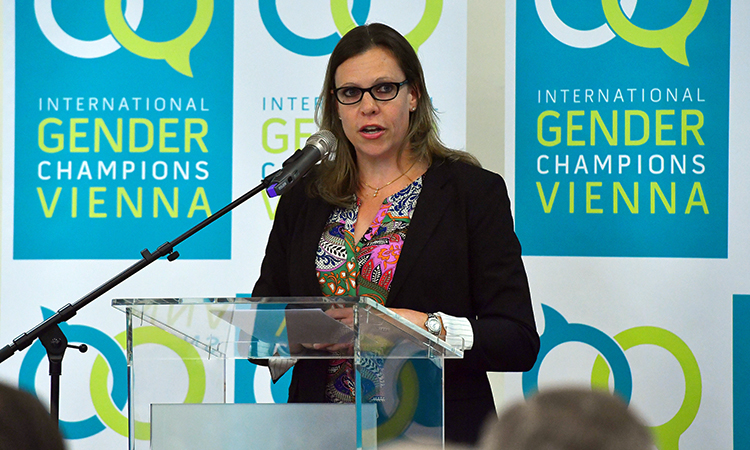 Good afternoon.  Welcome and thank you for joining us!  Your Excellencies Director-General Fedotov, Director General Amano, Executive Secretary Zerbo – it is an honor to have you with us today.

My name is Kathryn Holmgaard and I am the Spokesperson for the U.S. Mission to International Organizations in Vienna.  I am delighted to welcome you here today for the official launch of the Vienna branch of International Gender Champions.

The International Gender Champions initiative was born out of the efforts of the United Nations Office at Geneva, the U.S. Permanent Mission there, and the NGO Women @the Table.

It is a leadership network of permanent representatives and heads of organizations that brings together female and male decision-makers to break down gender barriers.  Leaders are asked to make commitments on an individual level to lead by example in promoting gender equality within the organizations they lead.

By signing on to a Panel Parity Pledge, Champions commit to reducing the number of, and hopefully eventually eliminating entirely, single-sex speaker panels.  Champions then make two additional personalized commitments and agree to track their progress on these commitments over time.

After its establishment in Geneva in June of 2015, the International Gender Champions initiative expanded to New York earlier this year.  We are pleased to be the third city added to this prestigious roster and I am elated to see so many of Vienna’s own Gender Champions here with us this afternoon.

Together committed leaders will generate momentum at the highest levels to champion meaningful change and facilitate strong cross-cutting links for the greatest possible impact.

Without further ado, I would like to kick off this special event with a video message from United Nations Secretary General Antonio Guterres.