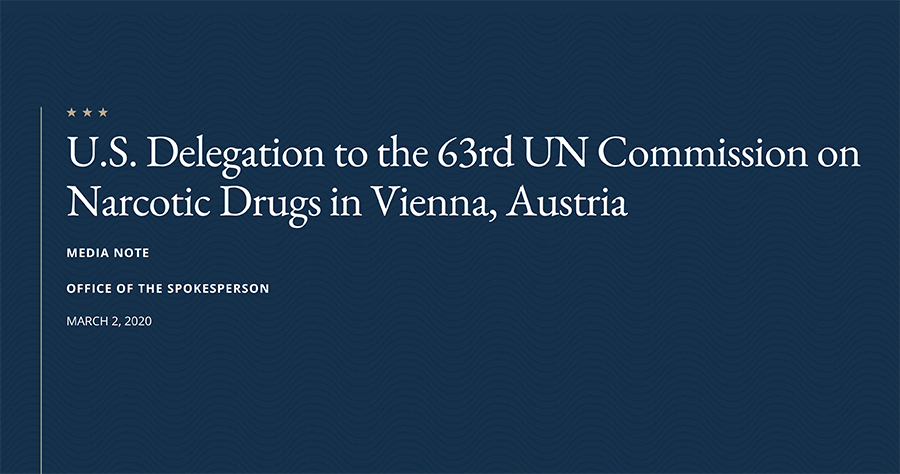 U.S. Delegation to the 63rd UN Commission on Narcotic Drugs in Vienna, Austria

Principal Deputy Assistant Secretary of State for the Bureau of International Narcotics and Law Enforcement Affairs (INL) James A. Walsh will lead the U.S. delegation to the 63rd Commission on Narcotic Drugs (CND) from March 2-6, in Vienna, Austria. At the CND, the United States will continue to combat the global opioid crisis and synthetic drug threat by voting to place 13 dangerous and harmful substances under international control, including 12 new psychoactive substances, two of which are fentanyl-related substances.

The United States will build on President Trump’s Call to Action on the World Drug Problem by emphasizing the role of effective public-private partnerships to address the production, trafficking, and illicit diversion of drugs and their precursors, and to support drug use prevention, treatment, and long-term recovery.

The United States will utilize the high-level, international platform of the CND to promote a balanced and comprehensive approach to drug control for the next decade. In this context, the United States will support the efforts of the CND to consider questions on the international scheduling of cannabis while preserving the integrity of this important science-driven process.

The State Department, through INL, combats drug trafficking, transnational crime, and corruption worldwide by helping governments and civil societies build strong, stable, and fair criminal justice systems that counter the transnational crime and instability that threaten the security of the United States and our citizens.