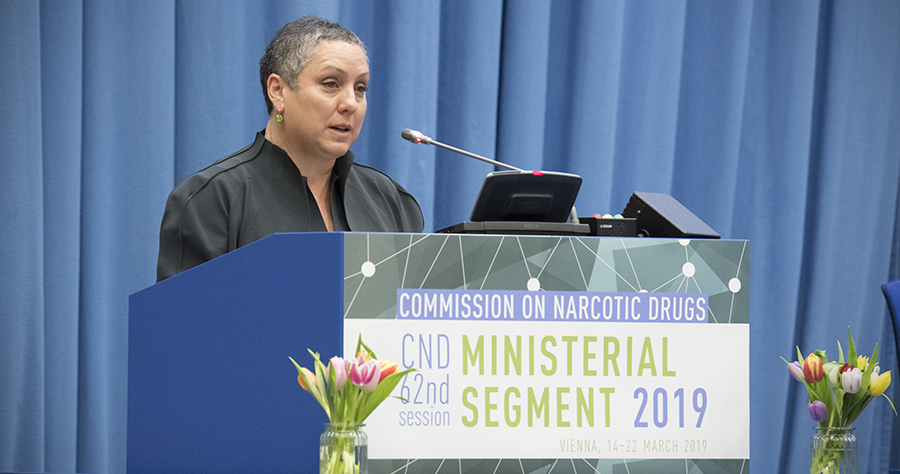 U.S. National Statement Statement at the High Level Segment of the 62nd Session of the Commission on Narcotic Drugs

Thank you, Mister Chairman, for the opportunity to address the 62nd Commission on Narcotic Drugs, and the high-level representatives assembled here. Thank you also to the Secretariat for its tremendous work in preparing for this pivotal event. The United States expresses its deep appreciation for the partnership, investment, and fellowship on display within this body, and for the commitment we all share to address the complex challenges presented by the world drug problem.

The illicit trafficking and nonmedical use of drugs is among the most pressing threats to the health and welfare of our citizens. This Commission is the leading entity within the UN system charged with facing this threat through collective international action aimed at safeguarding our future. Our work is guided by the three drug control treaties, which form the cornerstone of international drug policy, and by our three recent policy documents: the 2009 Political Declaration and Plan of Action, the 2014 High-Level Joint Ministerial Statement, and the 2016 Outcome Document from the UN General Assembly Special Session on the World Drug Problem. These documents are complementary and they are mutually reinforcing, and as representations of the commitments we have made to one another, in the Spirit of Vienna, they must serve as our guideposts as we commit to redoubled national action against drug trafficking and harmful misuse in each our countries.

As we agreed in the 2016 UNGASS outcome document, which is our most comprehensive international consensus on drug policy, our efforts to counter the threat of drugs going forward must always strike a careful, deliberate balance between supply reduction and demand reduction. Effective, evidence-based approaches to the reduction of both drug supply and drug demand are critical for an effective response to the world drug problem.

Today’s drug crisis, now turbocharged by globalization and new technology, is not like the threats of old. We’ve seen an explosion of potent new psychoactive substances that can be easily synthesized, bought and sold anonymously online, paid for with cryptocurrencies, and shipped from one country to another in small quantities that are very hard to detect. This new production and trafficking paradigm compounds the challenges posed by traditional supply chains, and adulteration of conventional plant-based drugs with these potent new synthetics is having deadly consequences.

Supply reduction strategies must therefore be agile and innovative, and able to rapidly respond to innovations in drug chemistry and trafficking. To meet this challenge, we are supporting UNODC in launching its “ToolKit” of technical assistance interventions that can help Member States develop effective responses to synthetic drugs threats.

Demand reduction is a complementary task in addressing the problem of drug use and its consequences as a whole. Substance use disorder is a chronic disorder of the brain which leaves its sufferers highly susceptible to relapse, but one that can be treated with effective, evidence based treatment. We must ensure consistent implementation of evidence-based prevention programming. We should focus our attention on helping people with substance use disorders achieve a life free of drug misuse by improving the quality of treatment services, and increasing access to treatment by reducing stigma and by linking treatment services with other sectors, including the criminal justice system. By focusing on treating drug dependence and promoting recovery rather than merely reducing the negative health and social consequences of drug use, we can make real progress in protecting our citizens from the drug threat.

Finally, as Member States we must redouble our own efforts to combat the world drug problem. Under President Trump’s leadership, the United States has developed a National Drug Control Strategy that calls for balanced action on preventing drug use before it starts, providing treatment leading to long-term recovery, and reducing the availability of illicit drugs in the United States. We have also developed a five-point strategy to address the public health aspects of the current U.S. opioid crisis. These strategies are not merely statements of priorities, but rather calls for concrete action. Unfortunately, some governments are not living up to their commitments to counter the world drug problem; in fact, some are directly responsible for facilitating drug trafficking and other criminal offenses that are expressly prohibited by the three UN drug conventions. Of particular note, the members of the Venezuelan delegation here today represent the illegitimate government of Nicholas Maduro, and thus cannot be considered as speaking on behalf of the Venezuelan people – especially at a UN Commission that is charged with upholding the international legal framework for combating illicit drugs. The United States joins over 50 nations in recognizing Interim President Juan Guaidó as the only legitimate president of Venezuela, in accordance with the Constitution of Venezuela Turning back to the Commission on Narcotic Drugs, we want to underscore that our Commission has the potential to serve as a valuable forum for sharing technical expertise, coordinating global initiatives, and guiding our collective efforts, it is ultimately only through redoubled action at the national level that we will begin to make tangible and sustainable progress on the world drug problem. The Conventions have given us the tools we need, and the three policy documents have charted our course; we now have a responsibility to live up to our commitments and demonstrate our values through concrete action.