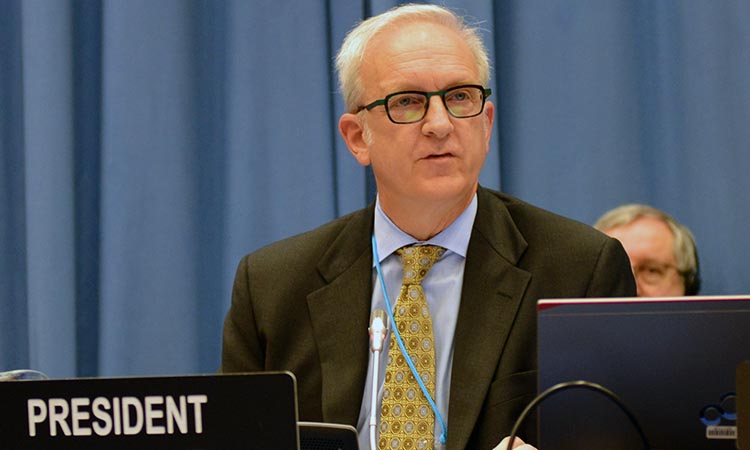 Delegates from the United States participated in the Third Extraordinary Meeting and Sixth Organizational Meeting of the Parties to the Joint Convention on the Safety of Spent Fuel Management and on the Safety of Radioactive Waste Management (Joint Convention) on May 16-19 at the International Atomic Energy Agency (IAEA) in Vienna, Austria. The meetings were held in preparation for the Sixth Review Meeting of the Parties in May 2018.

The Joint Convention, a multinational convention under the auspices of the International Atomic Energy IAEA Secretariat, opened for signature on September 29, 1997, and entered into force on June 18, 2001.  The Joint Convention went into force in the U.S. on July 14, 2003.  It was the first legal instrument to directly address spent fuel management and radioactive waste issues on a global scale.  The Joint Convention incentivizes countries to work together within a three-year peer review process, with the goal of increasing the level of safety of spent fuel and radioactive waste worldwide.  The sixth review process is now underway.

Mr. Huizenga chaired the meetings on May 16-19, and concluded by turning over the gavel to the newly elected President, Mr. Bismark Mzubanzi Tyobeka of South Africa.  During these meetings, representatives of the Contracting Parties discussed improvements to the review process, particularly as they apply to nations without nuclear power plants; elected new officers; and approved plans for the Sixth Review Meeting in 2018.  Douglas Tonkay, U.S. Department of Energy, will serve as a Vice President of the Joint Convention, and other U.S. officials will serve in various capacities as country group officers.

The Joint Convention review process provides many benefits to the U.S., such as harmonizing international approaches to achieve strong and effective nuclear safety programs on a global scale, stimulating initiatives to improve safety systems within our own domestic programs, and providing examples of technical innovations by other Contracting Parties that can be useful to U.S. licensees, utilities, and industry in managing safety and its associated costs in waste management.