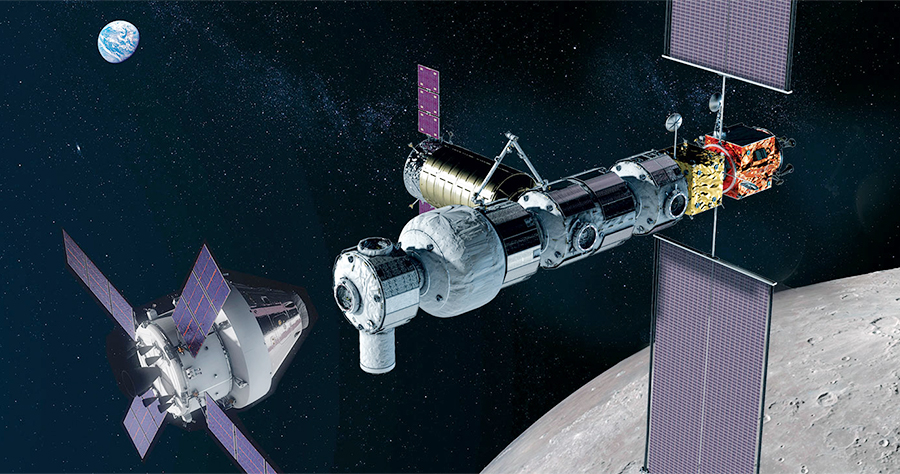 Artist's concept image of the Gateway spaceship, which will be the first human outpost in orbit around the Moon. (NASA)

As prepared for delivery by Deputy Chief of Mission Nicole Shampaine
to the 56th session of the Scientific and Technical Subcommittee (STSC) of the Committee on the Peaceful Uses of Outer Space (COPUOS)
Vienna International Center, February 11, 2019

Thank you, Madame Chair. The United States Delegation is confident that under your leadership, we will have a highly successful session, and we look forward to working with you. We commend the Director of the Office for Outer Space Affairs, the Secretariat, and the entire office, for their impressive work, especially during the highly successful celebration of UNISPACE+50. And, we welcome the newest Member States to the Committee: Cyprus, Ethiopia, Finland, Mauritius, and Paraguay.

The U.S. congratulates Dr. Peter Martinez and our fellow Member States for endorsing a Preamble and 21 voluntary, non-legally binding guidelines for the long-term sustainability of outer space activities (LTS). These guidelines, agreed during the 55th session of the STSC in February 2018, were the result of eight years of extensive work by a broad range of delegations. The United States hopes that States can begin voluntarily implementing these guidelines to the greatest extent practicable, consistent with their respective needs, conditions, and capabilities. Madame Chair, my delegation will discuss several key aspects of U.S. implementation at this session of STSC in technical presentations on space traffic management, orbital debris mitigation, satellite servicing, and civil society contributions to LTS. We also look forward to hearing the progress that other COPUOS members have made in the practical implementation of the 21 consensus LTS guidelines at this and future STSC sessions.

Madame Chair, 2018 was a banner year for the United States space program. NASA celebrated its 60th anniversary with yet another spacecraft landing on the surface of Mars, new commercial partnerships for deliveries to the lunar surface, technology breakthroughs, and significant progress with our mission to once again send humans to the Moon. The work of National Space Council and resulting Space Policy Directives signed by President Trump have brought together all elements of American leadership in space. The U.S. has inspired generations and will continue, with our commercial and international partners, to proudly carry on the American tradition of exploration and discovery into the infinite frontier of space.

As directed by Space Policy Directive 1, NASA is returning America to the Moon. This time we will not go alone, but in a way that reflects the world today — with government, industry, and international partners in a global effort to build and test the systems needed for challenging missions to Mars and beyond. NASA is working with domestic and international partners to solve the great challenges of living and working in space farther from Earth, in the process creating new knowledge that benefits all of humanity and inspires the world. Working with its partners, NASA is leading development of the first human outpost in orbit around the Moon, known as the Gateway. This Gateway to the Moon and beyond will give us a sustainable presence in lunar space, fuel scientific discovery, propel activities with commercial and international partners to explore the Moon and its resources, and translate that experience toward human missions to Mars. The transportation system that will carry astronauts from Earth to the Gateway, and help build the structure in orbit, continues to take shape as we approach the first launch of NASA’s Space Launch System rocket and Orion spacecraft.

The International Space Station (ISS) is a cornerstone of our integrated approach to deep space. The United States is dedicated to using the full potential of the station to demonstrate critical technologies, learn about human health in space, and focus commercial energies on the growing low-Earth orbit economy. Last year, we celebrated the 20th anniversary of the launch of the first element of the ISS. More than 230 people from 18 countries have visited the ISS, and the ISS has hosted more than 2,500 scientific investigations from more than 100 countries. All of this would not have been possible without the contributions from 15 nations, represented by the Canadian Space Agency, European Space Agency, Japan Aerospace Exploration Agency, and Roscosmos in partnership with NASA.

It has also been an exciting year for the robotic exploration of Mars. The NASA Curiosity rover identified fragments of complex organic molecules in the shallow surface of Mars, giving us further evidence that the Red Planet could have hosted life at one point. NASA launched and landed the Interior Exploration using Seismic Investigations, Geodesy and Heat Transport, or InSight. InSight touched down on Martian soil in November to study the planet’s interior and, just 10 days after landing, provided the first ever “sounds” of winds on Mars. NASA also announced the landing site for its next Red Planet rover, Mars 2020, which will continue U.S. efforts to search for evidence of life and prepare for human arrival.

In August, the NASA Parker Solar Probe launched on the first-ever mission to “touch the Sun.” The mission broke records for fastest human-made object and closest approach to the Sun, and just last month completed its first orbit of the Sun. After a two-year journey, the NASA OSIRIS-REx mission arrived at its destination, the asteroid Bennu, in December. One of the first observations from this asteroid sample return mission revealed water locked inside the clays that make up Bennu. After nine years of searching for planets outside our solar system, the NASA Kepler space telescope ran out of fuel, but not before scientists were able to use it, and Hubble, to find hints of what could be a moon orbiting another planet outside our solar system. If confirmed, this would be the first exomoon ever detected. Launched in April, the NASA Transiting Exoplanet Survey Satellite continues the search for planets outside our solar system. And on New Year’s eve in the United States, scientists reveled at the arrival of NASA’s New Horizon spacecraft at Ultima Thule – the most distant planetary object explored at a mere 6.5 billion kilometers from Earth.

Madame Chair, since the dawn of the space age, the U.S. has used satellites to better understand our home planet, improve lives, and safeguard our future. The United States makes its Earth observations freely and openly available to those seeking solutions to important global issues, such as changing freshwater availability, food security, and human health. As a recent example of this, for the first time ever, measurements from NASA satellites are being used to help combat a potential outbreak of life-threatening cholera in Yemen. The U.S. National Oceanic and Atmospheric Administration (NOAA) advanced Joint Polar Satellite System, which includes the NOAA-20 satellite and the Suomi National Polar Partnership satellite, provides forecasters around the world with timely access to highly accurate and detailed observations critical for improved weather prediction computer models. NOAA’s newest geostationary satellite, GOES-17, which will become operational as GOES West later this year, covers about two-thirds of the Pacific Ocean and countries in the Americas with coasts on this ocean.

The U.S. Geological Survey continues to operate Landsat 7 and Landsat 8 satellites, collecting, on average, approximately 1,200 global scenes per day. Landsat 8 provides night and ocean imaging to support campaigns for 50 volcanoes globally. USGS and NASA are working together to launch Landsat 9 in 2020. All of the approximately eight million unique Landsat scenes are freely available to users worldwide and continue to provide essential information for science and geospatial applications, with nearly 70% of these archived scenes directly attributable to our international partnerships.

Madame Chair, the United States will continue to lead in expanding international cooperation on mutually-beneficial space activities to broaden and extend the benefits of space for all humankind. In this regard, the United States was pleased with the success of the UNISPACE+50 commemoration that took place in conjunction with the 61st Session of COPUOS in June of last year. We were particularly pleased that UNISPACE+50 initiated a process for the Committee to develop a “Space2030” agenda over the next two years, setting the course of the Committee’s work through 2030.

Madame Chair, my Delegation would like to note the progress made during the first meeting of the Working Group charged with developing COPUOS’ “Space2030” agenda, which took place in Vienna, Austria, October 8-12, 2018. The United States would like to thank Ambassador Maria Assunta Accili Sabbatini from Italy and Dumitru-Dorin Prunariu from Romania for their outstanding leadership during the first meeting, an effort which resulted in the development of a work plan and method of work, setting the Working Group on a path for success during this year’s COPUOS meetings.

The United States looks forward to continuing our participation in this effort to develop a visionary document that lays the foundation for the future work of the Committee and its subcommittees, taking into account new directions that member states are taking to move beyond low-Earth orbit, specifically to the Moon, Mars, and other destinations, as well as incorporating new and innovative commercial ventures.