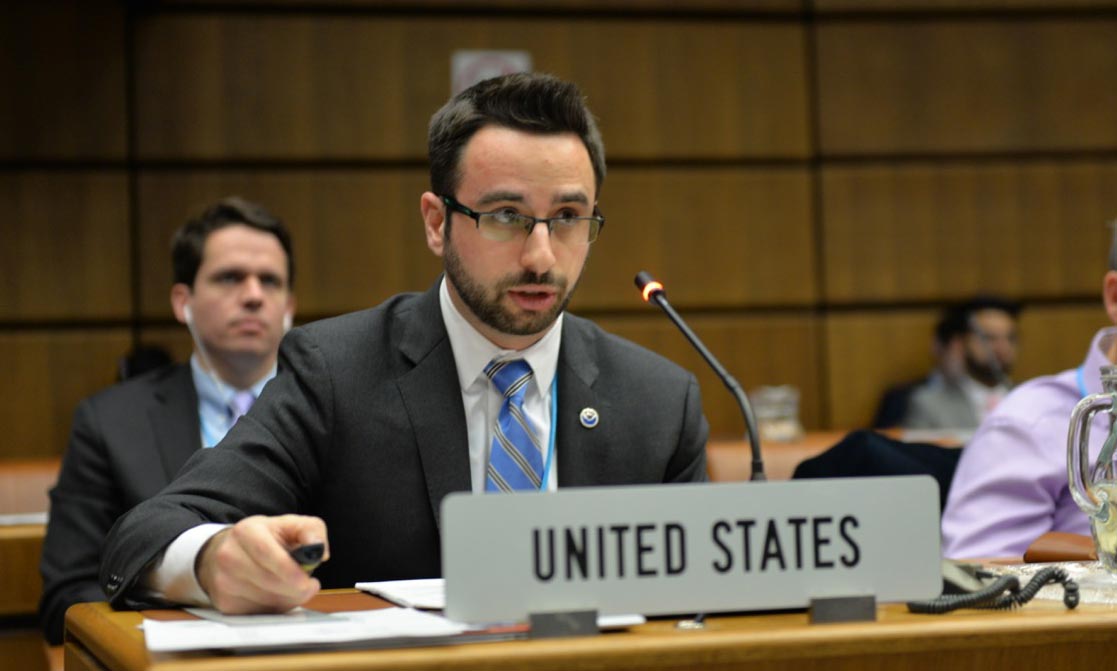 Thank you, Madam Chair and distinguished delegates, for the opportunity to talk about the current and future meteorological and environmental satellite activities of the National Oceanic and Atmospheric Administration, or NOAA. I am Matthew Butler from the Office of International and Interagency Affairs within the NOAA Satellite and Information Service.

Wherever you live, you and your families are undoubtedly affected by severe weather and climate events in many different ways. Countries, industries, first-responders, and ordinary people like us rely upon accurate weather forecasting and severe storm warnings that begin with observations and data from meteorological and environmental satellites. Together with our international partners, NOAA operates a fleet of meteorological satellites that provide critical earth observation and space weather data for users around the world.

The US meteorological satellite fleet dates back to the very first geostationary meteorological satellite, called ATS-1. In fact, two months ago, NOAA celebrated the 50th anniversary of the 1966 launch of ATS-1, a whole four years before NOAA was even established. ATS-1 collected weather data for twelve years and served another seven years as a communications satellite for broadcasting weather information. ATS-1 could take a full-disc of cloud images only every 30 minutes with a 3.2 kilometer resolution as can be seen in the photo of Hurricane Monica. ATS-1 was about the size and weight of a Smart Car.

As you can see in the slide, ATS-1 could only view the clouds of Hurricane Camille in daylight. In contrast, imagery from our newest geostationary satellite, GOES-16, demonstrates just how far we have advanced beyond the ATS satellites. GOES-16 observes the entire hemisphere day and night in sixteen spectral bands. GOES-16 will join Japan’s Himawari-8 and 9 as the world’s most advanced geostationary weather satellites when placed into operations in late 2017.

In June 2016, NOAA decommissioned the world’s oldest operational geostationary satellite and performed disposal operation in line with the current disposal requirements. GOES-3 performed many missions during its 38-year lifetime. It first served a 10-year career as a geostationary weather satellite, capturing imagery such as the eruption of Mt. St. Helens in May 1980. When GOES-3’s weather instruments were no longer functional, NOAA utilized GOES-3’s remaining communications payloads. As a result, GOES-3 served as PEACESAT, which broadcast weather warnings, healthcare services, educational programs, disaster management and response support to Pacific Island nations. GOES-3’s final mission took advantage of its inclined orbit, which placed it in the field of view of the Amundsen–Scott South Pole Station for six and a half hours per day for direct communication with the U.S. mainland. An impressive career for just one satellite.

NOAA launched GOES-16 on November 19th, 2016. GOES-16 is currently undergoing its checkout phase. Its first images are truly remarkable and can only be described as showing “the earth in high definition.” The upper left image is the moon as seen from geostationary orbit. Like previous GOES satellites, GOES-16 uses the moon to calibrate its instruments. In the upper right, a fire and its associated smoke are evident over southern Mexico near the coast. The two images on the bottom of the slide demonstrate GOES-16’s wide field of view. Observations of the African west coast are critical for Atlantic hurricane forecasting. High-definition imagery of southern South America will significantly improve forecasting over the entire western hemisphere.

In addition to its geostationary satellites, NOAA operates Suomi NPP or SNPP, a polar orbiting satellite. SNPP achieved five years on orbit in October 2016 and carries advanced instruments that will also fly on NOAA’s upcoming Joint Polar Satellite System or JPSS spacecraft scheduled to launch this year. The slide shows examples of the diverse types of SNPP high-resolution imagery from its 22 channels. The daylight image of Tropical Cyclone Winston, the strongest cyclone ever observed in the southern hemisphere, clearly shows the storm’s intensity and how it completely engulfed Fiji and the surrounding islands. While the image below Winston may appear to be a tropical storm. It is actually a rotating weather pattern over Alberta, Canada. SNPP clearly showed the extent to which wildfire smoke is carried aloft and dispersed over a wide area. The image of the Inner Niger Delta’s complex combination of river channels, lakes, swamps, and occasional areas of high elevation highlights how SNPP can determine land surface type, along with areas of wildfires and flooding. The multi-color dust cloud image is an experimental product developed by our colleagues at the European Organisation for the Exploitation of Meteorological Satellites, or EUMETSAT. The actual dust is bright pink and can be observed day and night. Accurate dust cloud data is critical for predicting Atlantic hurricane formation. Overall, SNPP data are important for long-term climate research as well as meteorological forecasting.

NOAA is planning to launch its JPSS-1 satellite, similar to SNPP, as well as the first six COSMIC-2 satellites later this year. COSMIC-2 will observe GPS signals passing through the atmosphere which can be used to measure temperature and water vapor content. NOAA will continue to launch satellites on the schedule on the slide in order to achieve a high level of robustness of our weather satellite fleet.

Upon first glance, this image may appear to be another depiction of the space debris problem. I promise you, it is not. This picture represents the World Meteorological Organization’s Global Observing System of weather satellites for terrestrial and space weather forecasting as well as earth science research. No one country can monitor the earth by itself. As a result, NOAA highly values its international partners that provide critical Earth observation data.

Finally, I want to end with a thank you. NOAA was pleased that OOSA accepted our donation of scale models of the GOES-16 and JPSS-1 spacecraft for permanent display here at OOSA. I would like to end with a short video from the Assistant Administrator for NOAA’s Satellites and Information Service, Dr. Stephen Volz: