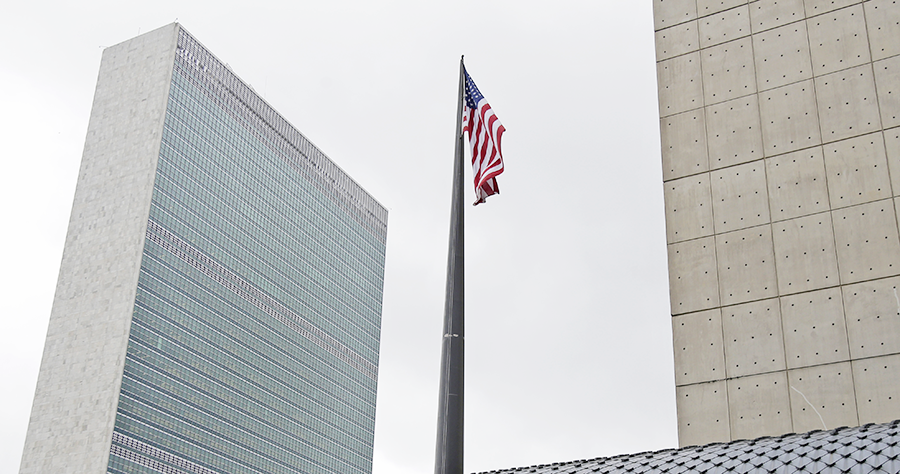 Mr. Chairman, Excellencies, ladies and gentlemen, this meeting is not like any other Preparatory Committee (PrepCom), for this is the last chance the States Party to this Treaty will have to come together to prepare for next year’s Review Conference (RevCon) marking the 50th anniversary of the Treaty on the Non-Proliferation of Nuclear Weapons (NPT) coming into force. It is also unusual in that we have yet to accomplish procedural steps that, at this point in the NPT review cycle, have usually long since been taken in order to prepare for a Review Conference. Accordingly, it is our most basic task — the sine qua non of this PrepCom — to decide quickly upon those procedural arrangements. It is essential to the prospective success of the RevCon that we finalize the full RevCon leadership team, including the RevCon President, to enable that team to begin consultations right away. For the sake of the RevCon, Mr. Chairman, this is indeed a matter of surpassing urgency.

Successful preparation for next year’s RevCon is important, because that anniversary will be an occasion for us to look back across the NPT’s existence and review progress in living up to the Treaty’s obligations and ideals, to take stock of the environment we face today, and to find better ways to work together to meet the challenges of the next 50 years. We must recall our predecessors’ accomplishments in building a nonproliferation regime that has provided great benefits to all Parties and become a cornerstone of international peace and security. We must reaffirm our shared commitment to the NPT and the broader nonproliferation regime. And we must rededicate ourselves to preserving and strengthening them for future generations.

I. The Architecture of the NPT and Its Importance

The most critical point to remember is that the NPT has provided security benefits to all Parties by impeding the proliferation of nuclear weapons, staving off the incalculably dangerous “cascade” of proliferation that so many feared before the Treaty was negotiated, and thus greatly reducing the likelihood of nuclear war. These benefits have accrued to all, but they have been most profound for the non-nuclear-weapon states — which the NPT has helped protect against the catastrophe of having neighbors and regional rivals weaponize.

But the nonproliferation assurances provided by the NPT, Mr. Chairman, do more than just make every Party more secure. They also provide the foundation upon which peaceful nuclear cooperation has been built in areas ranging from electric power generation to applications that benefit mankind — and especially the developing world — in medicine, agriculture, health, science, and industry. Since such sharing of benefits would not be possible or sustainable without the confidence provided by nonproliferation assurances, this is another reason to rededicate ourselves to the NPT’s continued success.

Nonproliferation, after all, does not impede thriving peaceful nuclear programs and effective applications of nuclear technology that improve health and prosperity worldwide. It is not a roadblock or even a speed bump on the road to such nuclear cooperation: it is the road itself. Moreover, assistance on safeguards, export controls, and nuclear safety and security is widely available to help states build their own paths. For the NPT’s anniversary, we must remember this.

Nor is that all, for the NPT also provides an essential foundation upon which to base further progress in living up to the disarmament ideals of the Preamble and in Article VI. One could scarcely imagine nuclear disarmament occurring were it not possible to rely upon robust nonproliferation assurances to keep newcomers from weaponizing and to keep those who eliminate nuclear weapons from reconstituting their arsenals. So we have the NPT to thank here, too — and an additional reason to maintain and nurture it for many more years.

These aspects of the NPT — both its nonproliferation assurances and the peaceful uses and disarmament potentialities that this nonproliferation core helps make possible — are thus shared interests for all NPT Parties, not competing priorities. The Treaty’s future success will depend upon our recognizing this and focusing upon what unites us in our reliance upon the NPT.

II. Our Way Ahead Together

To this end, Mr. Chairman, we must rededicate ourselves to helping the NPT and the nonproliferation regime meet the challenges it faces today. We must resolve the crisis created by North Korea’s development of nuclear weapons by ensuring its final and fully-verified denuclearization. We must block Iran’s pathways to nuclear weaponry by ensuring it never again engages in weaponization work and cannot dangerously position itself on the brink of Treaty “breakout.” We must also join together to hold Syria accountable for its NPT and IAEA safeguards violations.

The NPT review process is not the venue for resolving these challenges, of course, but for our work to be relevant here we must at least acknowledge them and lend our voices in support of such resolution. With diplomatic efforts underway to secure North Korea’s implementation of its denuclearization promises and obligations — and with efforts also underway to elicit Iran’s acceptance of comprehensive and enduring limits upon its ability to return to nuclear weaponization and posture itself for rapid “breakout” — it will hopefully be possible to see some progress toward these goals by the 2020 NPT Review Conference.

To provide confidence in the peaceful nature of nuclear activity worldwide, moreover, we must strengthen existing safeguards by making the IAEA Additional Protocol (AP) universal, and strengthen export controls by making the AP a condition for nuclear exports. And we must discourage NPT withdrawal and hold to account any state that withdraws while in violation of the Treaty’s provisions. With these steps, we can strengthen the regime, helping ensure its relevance and success for another half century.

In the arena of peaceful nuclear uses, Mr. Chairman, there is also more we can all do together. We can, for instance, rededicate ourselves to the safe and effective sharing of nuclear technology, not only by ensuring that resources available for nuclear assistance are allocated effectively, but also ensuring that resources are allotted to the less developed countries that genuinely need such assistance. Wealthy and powerful countries, particularly those with large nuclear industries, should no longer treat such programs as a way to benefit at the expense of the poorer states these programs were designed to assist.

For our part, the United States is pleased to submit a new Working Paper on peaceful nuclear uses. We will have more to say about this in Cluster 3, but I mention it now to highlight our emphasis upon supporting peaceful uses. We intend to support the continuation of regional workshops, including plans to by the prospective RevCon President to share information on the benefits of peaceful uses and how to expand them worldwide. We will continue to support IAEA peaceful-use programs, and we are ready to explore and develop additional, new, and innovative support vehicles of our own to encourage peaceful uses — with an emphasis upon outreach to nontraditional stakeholders in the private sector, academia, and industry, as well as among national regulators and the science and technology innovation communities.

On disarmament, we are developing a new dialogue exploring ways to ameliorate conditions in the security environment that impede progress toward a future safely and sustainably free of nuclear weapons. As shown by our success in cutting the U.S. nuclear arsenal by 88 percent after the relaxation of Cold War rivalries, disarmament progress depends — as the NPT Preamble acknowledges — upon easing tensions and strengthening trust. Since the favorable conditions that made that progress possible no longer apply, it is time to build a new disarmament discourse that can help meet these challenges.

Rather than ignore the deteriorating conditions that impede progress, our “Creating an Environment for Nuclear Disarmament” (CEND) initiative recognizes them explicitly and devotes itself to trying to overcome them. We will hold a side event on CEND tomorrow and present a paper on operationalizing it in the “Creating the Environment Working Group” (CEWG).

For the moment, Mr. Chairman, let me simply note that we anticipate holding the first CEWG Plenary this summer, at which participants will have the opportunity to organize themselves into functional subgroups and identify key questions for each group to explore. What these questions will be is, of course, up to the Plenary. We imagine, however, that it would be best to approach these challenges in three broad, conceptual areas:

We aim to have the CEWG agenda set in the months ahead, and expect that CEWG subgroups will start to meet before the RevCon. We anticipate that the CEND process will remind NPT Parties of the seriousness and honesty with which disarmament is being approached — and that by helping identify effective measures that can facilitate disarmament, CEND will help all Parties live up to the ideals of the Preamble and Article VI.