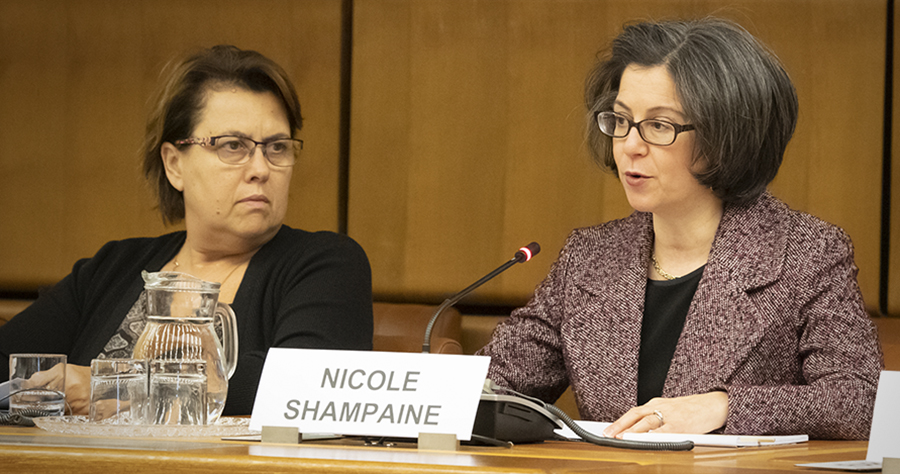 Thank you for this opportunity to speak on the International Day for Women and Girls in Science, and to share the perspective of the United States on both new developments in our space program, and on the importance of STEM education for women and girls.

2019 is a landmark year for the United States and space exploration. In July, we will celebrate 50 years since three brave, young pilots flew a quarter of a million miles through space to reach the surface of the Moon with Apollo 11. And as we look back, we are also looking forward: the U.S. is now engaged in efforts to launch American astronauts back into space on American rockets, return to the moon, and put astronauts on Mars.

NASA has come a long way since 1969. Since the days of Neil Armstrong and Buzz Aldrin, new astronauts have come along and accomplished equally impressive feats.

One astronaut, in particular, is worth mentioning. Born in 1960, this astronaut had an outstanding career at NASA, starting as a biochemistry researcher and working to become NASA Chief Astronaut; commander of the International Space Station not once, but twice; “walking” in space ten times, and spending an incredible total of 665 days in space.

This astronaut’s name is Peggy Annette Whitson. Peggy currently holds the record for spending more time in space than any other American astronaut, man or woman. In fact, on a list of the 50 humans who have spent the most time in space, Peggy ranks 8th overall, and is the only woman on the list.

Those of us who have been alive to witness the developments in space exploration over the past decades have seen how it not only transformed science, but also society. Most of us here today will remember the movie “Hidden Figures,” and how women worked as the unsung heroes of NASA in the early decades of its existence. The female scientists, engineers, mathematicians, designers, and those in other technical professions are unsung no more.

It is clear to all of us in this room today, that, collectively, we have much more to do to remove barriers to women in STEM. For this reason, the U.S. Department of State runs programs to promote mentoring and networking for women and girls in the STEM fields throughout Africa, Asia, and the Americas.

One such program is TechWomen. Through TechWomen, we seek to provide international women leaders with the resources they need to excel in STEM industries. Last fall, approximately 100 inspiring women from 20 countries in Africa, the Middle East, and South and Central Asia, traveled to the United States to participate in a five-week mentorship program with some of the most talented women at notable science and technology companies in the tech Hub—and my home town—San Francisco.

The United States also supports a similar program for youth, TechGirls, an international summer exchange program designed to empower and inspire young women from the United States, Central Asia, the Middle East and North Africa to pursue careers in science and technology.

The State Department even runs a professional exchange program based on the Hidden Figures film called “Hidden No More: Empowering Women Leaders in Science, Technology, Engineering, and Mathematics” to allow women leaders in STEM fields to broaden their support network and take on mentorship roles in their home countries. Several participants spoke of the isolation they sometimes feel at home as a woman in a male-dominated field. The lesson we learned from these outstanding women is that sharing their experiences and having role models and mentors is critical to empowering the next generation of women and girl scientists. And, most importantly, telling it in a compelling manner leads to larger and more diverse audiences.

Here in Vienna, the U.S. Mission is doing its part to promote women in STEM fields. For the past three years, our Mission has funded a small number of girls from Kazakhstan and Afghanistan to attend a space-themed summer camp in the United States. We expanded last year’s program to include girls from Senegal and India. And in 2019, in collaboration with UNOOSA and other Missions here in Vienna, we hope to expand this exchange program to an even broader group of young girls.

We are strong believers in mentoring and the importance of role models, which is why we are so excited about the Space For Women initiative, and hope that some of our alumnae can one day be part of this much-needed network.

We don’t yet know when the first astronaut will got to Mars, but we know women will play an important role in making it happen. With programs like Women and Girls in Tech, and initiatives like Space For Women, we are getting closer to the day future generations will not only take for granted that a man has walked on the Moon, but also that a woman has walked on Mars.