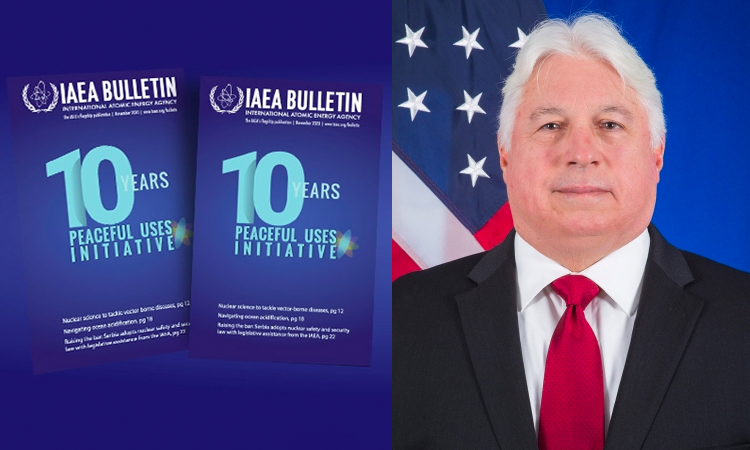 Why the United States is supporting the Peaceful Uses Initiative

This Op-Ed first appeared in the IAEA Bulletin, November, 2020

In 1992, US scientist Edward Knipling and his colleague Raymond Bushland received the prestigious World Food Prize for their successful work in the 1950s developing the sterile insect technique (SIT), a method of controlling harmful insect pests through irradiation. In 2012, after years of study, planning and work, Senegal introduced the SIT — with support from the United States — in a coastal area of the Niayes region to eradicate the bloodsucking tsetse fly, known for killing cattle and causing human “sleeping sickness” (human African trypanosomosis). Senegal joined a growing list of countries making use of this nuclear technique.

For over four decades, the SIT has been an important joint effort between the Food and Agriculture Organization of the United Nations (FAO) and the IAEA. The SIT uses irradiation to sterilize male insects, which are then released into the wild to mate with females without producing offspring. Over time, this reduces insect populations that spread disease. The Joint FAO/IAEA Programme on Nuclear Techniques in Food and Agriculture invests in applied research to improve the technique and supports the rollout of SIT packages to IAEA Member States.

Before the campaign in Senegal, this programme successfully eradicated the tsetse fly from the island of Zanzibar in the United Republic of Tanzania and helped control the insect pest in the Southern Rift Valley of Ethiopia. In Senegal, the technique led to the eradication of 99 per cent of the targeted tsetse population in just six months. This enabled farmers to switch to more productive, non-disease resistant varieties of cattle, leading to increased meat and dairy output and providing a more secure livelihood for farmers. This is just one example of a programme through which the IAEA makes an enormous and cost-effective contribution to peace and prosperity worldwide.

Accelerating and enlarging the contribution of nuclear energy, science and technology to peace, health and prosperity has always been the driving mission of the IAEA, as set forth in its founding Statute in 1957, and as reinforced in Article IV of the Treaty on the Non-Proliferation of Nuclear Weapons (NPT) in 1970. The peaceful uses of nuclear science and technology hold answers for key challenges in sustainable development and provide excellent return-on-investment for the countries funding and implementing peaceful uses projects. However, the areas of great need that would benefit from peaceful uses cooperation and assistance far exceed the funding available to the IAEA through Member State contributions.

For these reasons, at the 2010 NPT Review Conference, the United States helped the IAEA launch the Peaceful Uses Initiative (PUI), with the goal of raising US $100 million in additional funding for IAEA peaceful uses activities over five years. The United States pledged an initial US $50 million toward this goal and challenged other countries to match that amount. The PUI got off to a strong start with contributions from Australia, the Czech Republic, France, Hungary, Indonesia, Japan, Kazakhstan, New Zealand, South Korea, Sweden and the United Kingdom.* The United States pledged another US $50 million at the 2015 NPT Review Conference. Between 2010 and 2020, the United States and 23 other countries, together with the European Commission, contributed close to €175 million to the PUI.

The PUI allows contributors to support projects that have been developed and prioritized by the IAEA in consultation with IAEA Member States but that remain unfunded. It provides training and equipment for the application of nuclear techniques in human health, food security and water resources management, as well as for the safe and secure operation of nuclear power. PUI support also provides the IAEA with additional flexibility to develop and implement projects in reaction to unanticipated or urgent needs, such as responding to sustained drought in the Sahel region, monitoring radioactivity in the marine environment from the Fukushima Daiichi accident and helping Member States fight the Ebola and COVID-19 outbreaks.

Take, for example, the widespread acceptance and growing use of nuclear science and technology in cancer diagnosis and treatment. Cancer control is a critical public health priority in many countries and therefore a focus of the IAEA’s work. The IAEA helps countries formulate national cancer control programmes with a holistic approach involving all relevant national authorities, including by training specialized staff and planning for the development of appropriate national infrastructure to support the safe and secure use of equipment. The United States contributed US $1.5 million to IAEA work on cancer in 2019 through the PUI and another US $2.2 million in 2020 to upgrade the IAEA’s Dosimetry Laboratory training facility in Seibersdorf, Austria, complementing other donations to the IAEA’s work on cancer.

On the 50th anniversary of the NPT, we are highlighting this treaty’s significant, though often unheralded, successes. One of those successes was to provide the framework to enable States to benefit from the peaceful uses of nuclear energy, science and technology in a safe, secure and safeguarded manner. Support for the PUI demonstrates the ongoing commitment of the United States to fulfill our NPT Article IV undertaking to facilitate the fullest possible exchange of nuclear technology for peaceful purposes. We look forward to continuing to work with the IAEA and other donors under the PUI to support priority projects in coming years.

Ambassador Jeffrey L. Eberhardt serves as the Special Representative of the President for Nuclear Nonproliferation on behalf of the Secretary of State. He is the U.S. representative to Nuclear Nonproliferation Treaty (NPT) Review Conferences and related Preparatory Committee meetings, and performs diplomatic activities representing the United States and the Secretary of State at bilateral and multilateral conferences, consultations and negotiations dealing with implementing and strengthening activities related to the international nuclear nonproliferation regime in general, and the NPT in particular.