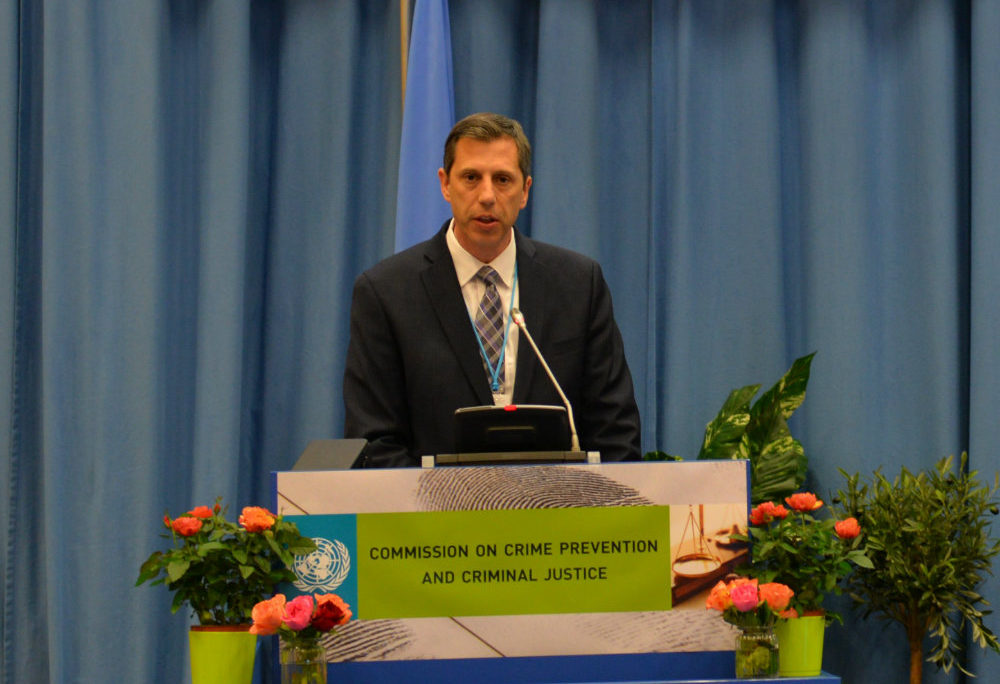 Mr. Chair, thank you for leading this Commission. It is an honor that we also welcome Secretary General Guterres to Vienna today. Your support – along with that of Director Fedotov, UNODC staff, and members of the Bureau – is critical to our success this week.

There is no greater law enforcement challenge today than cybercrime. In the 1980s and 1990s, small criminal organizations grew into global syndicates. Organized crime flourished because groups could operate across borders while law enforcement could not.

Together, we took bold steps to address this threat. We created two UN Conventions against Transnational Organized Crime and Corruption, also known as the UNTOC and UNCAC. These treaties provide an effective framework for cooperation between countries with the political will and capacity to use them.

In 2001, governments across the world also created the Budapest Convention against Cybercrime. Today, over 70 UN Member States have either joined this treaty, expressed a desire to join, or used it to reform domestic laws. However, these treaties alone are not enough. We must actually use them to fight criminals and protect real victims. The United States is committed to doing so. For example:

We are using the UNTOC and UNCAC to support real prosecutions. We have relied on these treaties over 700 times to share evidence, obtain testimony, and provide or receive legal assistance from 100 countries. We also used UNTOC and UNCAC over 250 times to extradite fugitives to or from 49 countries to stand trial or serve their sentence.

We have also used the Budapest Convention hundreds of times to share digital evidence with foreign countries.

We are providing critical support to developing countries, as well. In 2016, we provided $1.2 billion to help over 90 countries to fight crime, corruption, and terrorism.

My Bureau alone has dedicated $10 million in the last two years to combat cybercrime and intellectual property theft. We are proud to have helped over 1,200 judges, prosecutors, investigators, and border officials from 60 countries.

And here in Vienna, we have joined other Member States to support the Intergovernmental Expert Group on Cybercrime. The IEG is the UN system’s home for cybercrime, has opened constructive dialogue that will benefit our law enforcement agencies.

Our investments are delivering results. For example, last year, the United States joined with six countries and EUROPOL to shut down AlphaBay and Hansa Markets in the most prominent example of international cooperation against cybercrime to date. These sites were the two largest marketplaces on the Darknet for criminals to sell drugs, stolen identities, firearms, hacking tools, and toxic chemicals.

AlphaBay and Hansa Markets fueled the opioid crisis by allowing 2,000 vendors to illegally advertise or sell opioids and synthetic drugs, such as fentanyl. These products were then trafficked around the world and have contributed to over 42,000 deaths in the United States in 2016 alone.

This massive take-down, called Operation Bayonet, proved that when countries have the willpower and capacity to combat cybercrime, even the Darknet criminals cannot hide from the rule of law.

Tomorrow, I am honored to host a special event at 1:30pm in the Press Room featuring the actual investigators and prosecutors from the Netherlands, Canada, Thailand, and the United States who worked on this Operation Bayonet. You are all invited to join this first public discussion of this operation and what it means for the future of law enforcement.

Operation Bayonet proves we do not need treaties to respond to cybercrime. We only need to invest in the capacity of our national authorities and make the use of these tools we already have.

Here in Vienna, we can respond to this challenge by ensuring that our work at the CCPCJ provides real value to law enforcement. In the same way that criminals increasingly exploit information and communication technologies to carry out a wide range of crimes, so must our progress against cybercrime here in Vienna provide a wider benefit to law enforcement authorities across the board. Our work to fight trafficking in persons, money laundering, firearms and drug trafficking, and other forms of transnational organized crime here at the CCPCJ can only be strengthened as we make it easier for investigators and prosecutors to work together across borders and share electronic evidence. My delegation looks forward to working together with you in answering this call.