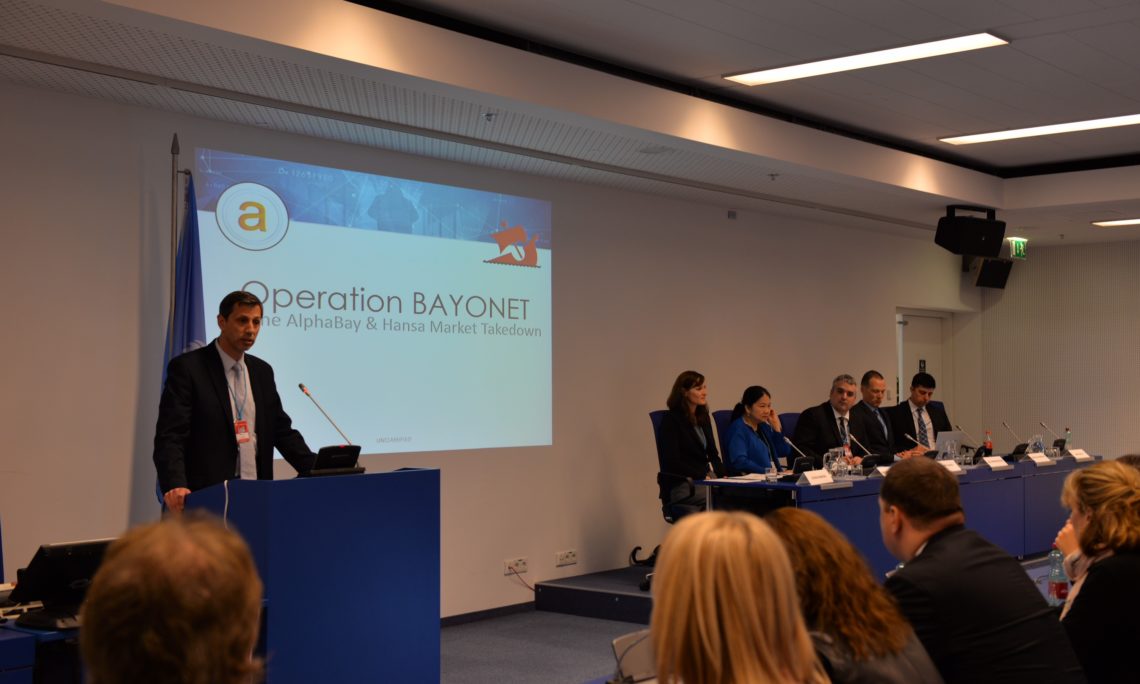 DAS Walsh making opening remarks at the U.S. hosted side event at CCPCJ.

Thank you all for joining us at our event called “Operation Bayonet: Tackling the Challenge of Online Dark Markets.”  My name is Jim Walsh.  I’m the Deputy Assistant Secretary of State for the United States.  And before we hear from our distinguished panelists, I would like to offer some thoughts on why we chose this topic for today’s discussion.

Exploitation of the Darknet by transnational organized crime is a growing phenomenon and is a serious threat to all our national and economic securities.  We have this thing called the Darknet – or the Dark Web – is a subset of the Deep Internet, or the Deep Web.  So first thing we have to do as an international body is try and figure out the terminology of all that. But this is part of the – for today’s conversation we’re going to describe it as the part of the Internet where content is not indexed by traditional search engines.  The Darknet can only be accessed using specialized software that encrypts the contents of transmissions and hides their sources and destinations, shielding users’ Darknet activity from scrutiny, including by law enforcement authorities.

So, while the Darknet can protect user privacy for legitimate reasons, the promise of anonymity also attracts criminals and terrorists.  Criminals use the Darknet to facilitate child sex exploitation; to engage in illegal sales of drugs, guns, and toxic chemicals, stolen identity information, financial – you name it.

Notably, the Darknet has created a new drug trafficking paradigm allowing users to order and receive products like fentanyl through the mail.  This means they bypass traditional drug trafficking routes and organizations.  Payment is often made through cryptocurrencies that can further protect anonymity.  So as many of us in the room attended the CND, we talked about the global opioid crisis where 42,000 deaths alone in the United States in 2016 were the result of opioids – the use of opioids. And many of this was fueled by the ready availability of drugs through the Darknet.

Darknet marketplaces, by their nature, require skilled law enforcement and extensive multilateral cooperation to penetrate this.  The purpose of this side event is to enable our experts here – all of whom were at the front lines of the operation that investigated and took down Alpha Bay and Hansa Markets – to describe what they learned during one of the most significant international law enforcement operations conducted to date against the dark web markets.  Prior to its seizure in 2017 by law enforcement authorities, AlphaBay operated for over two years. AlphaBay had, at its peak, over 350,000 listings for illicit goods and services, and approximately 40,000 vendors.  Can you imagine how much traffic in illicit activity had taken place there.  By comparison, the Silk Road dark web market seized by law enforcement in 2013 – that was the largest at the time by the way – had 14,000 listings and approximately 6,200 vendors.  So you don’t have to do the math here.  The market is certainly growing.  Hansa Market, while smaller in size than Alpha Bay, was an emerging Darknet favorite – and we thank our colleagues on the panel to bring that one down as well.

The operation to seize AlphaBay coincided with efforts of Dutch law enforcement authorities to take down this Hansa Market and you will hear more about this.  Before handing off to them, I would like to conclude by highlighting a little bit more what the U.S. government is doing to combat this threat.

In the United States, we have found existing instruments and tools of international cooperation such as the Budapest Convention, the UN Convention against Transnational Organized Crime, the 24/7 Network Points of Contact by the G-7 to be critical tools for law enforcement cooperation on cybercrime.  We urge all countries to make full use of this toolkit, which is already available to a wide range of countries.  The more countries taking action on cybercrime, and working together, the more effective we will be. It is important that we prevent the creation of safe havens that can be exploited by criminals, whether they be on land or in cyberspace.

We also urge continued focus on technical assistance building.  For our part, the United States is ramping up our foreign assistance programs to help developing nations build their capacity to pursue Darknet criminals.  In the last two years alone, my bureau at the State Department has set aside over $10 million specifically for foreign law enforcement training on this particular issue and other related international property crimes on the internet. So these funds are helping, right now, to train over 1,200 law enforcement officials from sixty nations. And we want to expand that.

In addition, many of our regular anti-crime training courses now include components on the increased use of virtual currencies to hide the proceeds of crime.  As transnational organized crime expands into the shadowy corners of the Internet, meeting the demands of our law enforcement agencies for training and technical assistance is essential to combating this Darknet threat.

So you probably heard enough from me, a diplomat.  I think it’s time to turn in over to our experts.  So I’m excited that our panel is here – thank you all. Thank you all for joining us and let’s have a really good conversation.  Thank you.