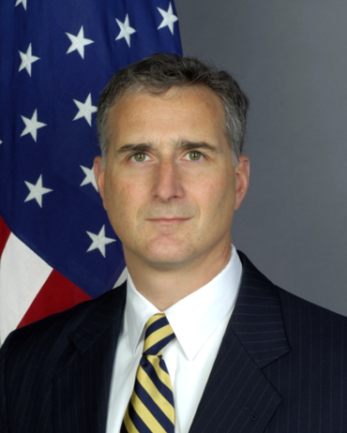 Louis L. Bono is Deputy Chief of Mission of the U.S. Mission to International Organizations in Vienna.  A member of the Senior Foreign Service, he previously served as deputy chief of mission at the Embassy to the Holy See, director of the Basrah Regional Office, on the National Security Council, and as an advisor to the Deputy Secretary of State and to the Under Secretary of State for Economic and Business Affairs.  His other postings include the U.S. Missions to the EU and the UN and the U.S. Embassies in Berlin and Islamabad.

He has received several State Department awards, including two for heroism and the Secretary’s Expeditionary Service Award.  He earned an M.S. from the National Defense University, a J.D. from Pace University School of Law, and a B.A. from Manhattanville College.  In 2011, he was elected chairperson of the APEC Economic Committee.  Prior to joining the Foreign Service, he was an assistant attorney general in New York and served in the Army.  He is currently a member of the Army Reserves and served as an instructor at West Point and the Army War College.  He and his wife have four children.