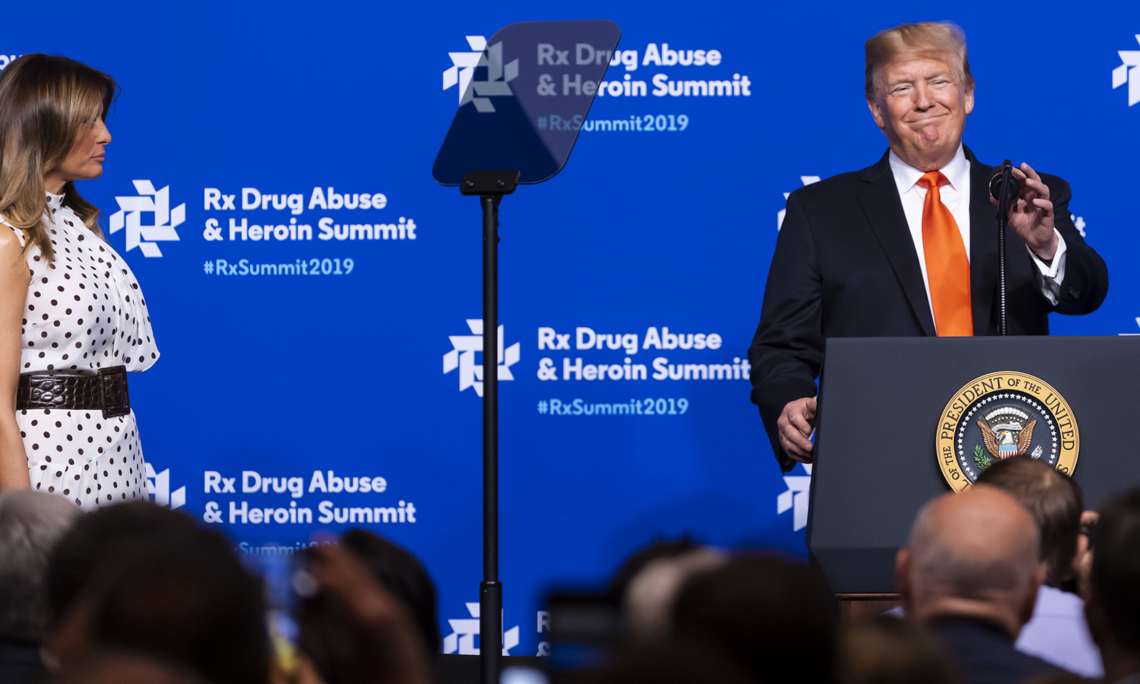 Office of the Press Secretary

PRESIDENT DONALD J. TRUMP IS FIGHTING TO END THE OPIOID CRISIS THAT HAS DEVASTATED TOO MANY AMERICAN COMMUNITIES

“We will defeat this crisis, we will protect our beautiful children, and we will ensure that tomorrow is better, brighter, stronger, and greater than ever before.” – President Donald J. Trump

FIGHTING THE OPIOID CRISIS: President Donald J. Trump’s effort to combat the opioid crisis is making progress and he remains committed to ensuring we end this crisis next door.

• Last year, President Trump launched his Initiative to Stop Opioid Abuse and Reduce Drug Supply and Demand, a first-of-its-kind effort to draw out the factors fueling the opioid crisis and to make real change.

• The Trump Administration has unveiled numerous programs across the Government since the President launched his initiative.

• The Administration is working with State, tribal, and local partners to address the opioid crisis in our communities, including awarding $1.5 billion annually in State Opioid Response grants.

• HHS grant funding to combat this crisis went up 4-fold from FY 2016 to FY 2018, and will increase again this fiscal year.

• DOJ has awarded more than $400 million over 2017 and 2018 to support treatment, prevention, and domestic law enforcement efforts.

• The Trump Administration awarded the highest number of Drug-Free Communities Support Program grants in a single year in the program’s two-decade history.

• President Trump’s efforts are producing results and he is committed to continuing the fight until we end this crisis.

• The rising overdose death toll through September 2018, the latest month for which data is available, has flattened compared to November 2017, when we saw the peak 12-month mortality.

• Nationwide, there has been an estimated 5 percent decrease in reported deaths since the same 12-month period a year ago.

• Drug overdose deaths were down in the most recent 12-month reporting period compared to a year ago by an estimated 13 percent in New Hampshire, 20 percent in West Virginia, 11 percent in Iowa, 21 percent in Pennsylvania, and 22 percent in Ohio.

STOPPING DEADLY DRUG SUPPLIES: A vital part of President Trump’s efforts to stop opioid abuse is stopping the illicit drug supplies that are flooding into our communities.

• The Trump Administration is working to cut off the deadly drug supplies that have helped fuel this devastating crisis.

• The Administration has stepped up funding and enhanced efforts to stop deadly drug supplies from flowing into our communities.

• President Trump is following through on his commitment to crack down on the suppliers of deadly, illicit drugs like fentanyl—both in the United States and abroad.

• President Trump’s efforts to secure our border are helping to stop deadly drugs from being brought into our country.

• The Administration has cracked down on the distribution of deadly drugs over the internet, including shutting down the country’s biggest Darknet distributor of drugs.

• DOJ has worked to bring drug dealers to justice by increasing indictments and has targeted seizures in areas hit hardest by the opioid crisis.

• Thanks to the President’s efforts, more shipments of illicit drugs are being stopped through the mail before they can reach our communities.

• The Administration is also tackling the prescription opioid crisis by expanding fraud and abuse detection and holding drug manufacturers accountable.

PREVENTING OPIOID ABUSE: The Trump Administration has made vital progress on reducing drug demand in an effort to address the root causes of this crisis.

• President Trump’s Administration has aimed to reduce demand by educating Americans about the dangers of opioid misuse and working to curb over-prescription.

• The Administration partnered with the Truth Initiative and Ad Council to educate youth about opioid misuse though an ad campaign that led to 1.4 billion total views.

• The Trump Administration’s efforts have helped generate a decline in opioid prescribing nationwide.

• The Department of Veterans Affairs’ (VA) Opioid Safety Initiative has reduced the number of veterans on opioids by 43,395 in President Trump’s first two years in office—an 11 percent decline.

• The Administration is tackling opioid distribution fraud, including taking down $3.3 billion in opioid connected fraud from 60 prescribers across seven States in Appalachia.

• The Department of Labor (DOL) is reducing prescription opioid use among injured Federal workers.

SUPPORTING PATIENTS THROUGH RECOVERY: The Trump Administration is committed to supporting our neighbors, friends, and family members who are struggling with addiction.

• In order to truly defeat this crisis, it is vital that we support Americans struggling with addiction. Otherwise, efforts to cut off supply and demand will be in vain.

• President Trump’s Administration is working to ensure Americans facing addiction receive the care that they need.

• The Administration has taken steps to expand the supply of lifesaving naloxone to first responders nationwide.

• The Trump Administration is working to expand access to evidence-based addiction treatments in every State and to our Nation’s veterans.

• Criminal justice reforms are being enacted to identify and treat offenders struggling with addiction.

• The Administration is providing State and local leaders with data to help coordinate and optimize efforts to combat addiction and overdose.

• The Department of Housing and Urban Development funds supportive housing for individuals with substance abuse disorders through its homeless service programs.