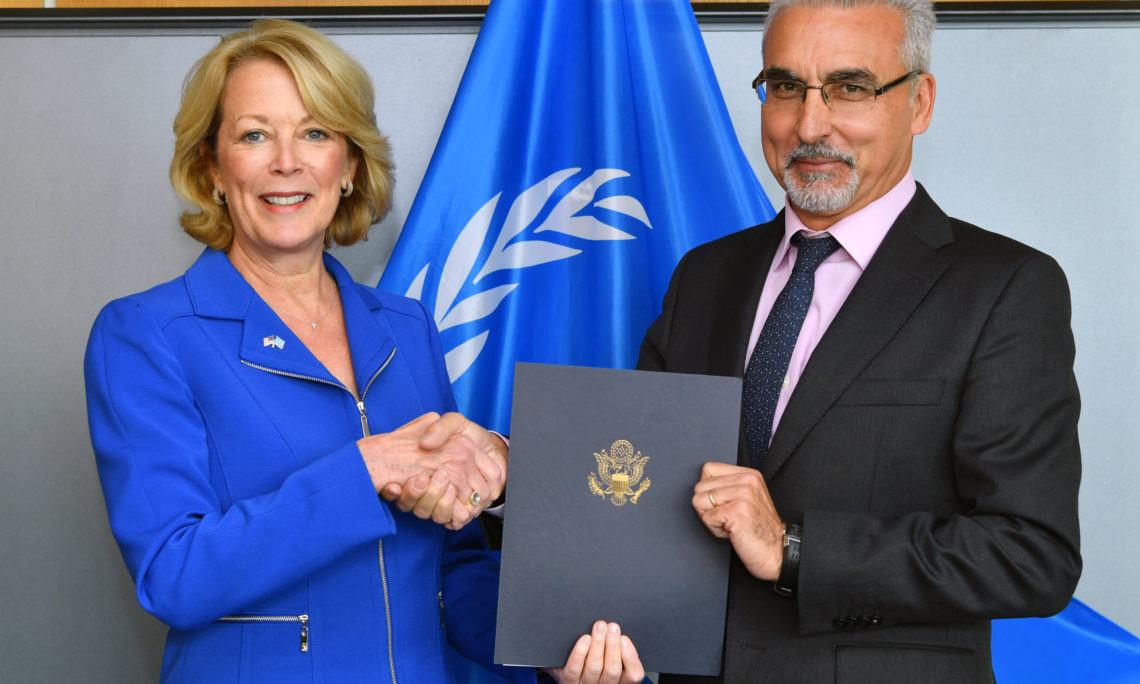 Ambassador Jackie Wolcott (left) with Acting Director General of the IAEA Juan Carlos Lentijo. (Photo credit:  Dean Calma, IAEA-OPIC)
Press Release
October 22, 2018
Vienna, Austria
Ambassador Jackie Wolcott presents credentials in Vienna
Ambassador Jackie Wolcott presented her credentials today in Vienna to Acting Director General of the International Atomic Energy Agency (IAEA) Juan Carlos Lentijo to become U.S. Representative to the IAEA, with the rank of Ambassador.
Ambassador Wolcott will also present her credentials to the United Nations Office at Vienna and to the Comprehensive Test Ban Treaty Organization to become the U.S. Representative to both organizations.
Ambassador Wolcott has served the United States for more than 30 years in a number of foreign policy and national security positions.  She was a Senate-appointed Commissioner to the U.S. Commission on International Religious Freedom from 2016-2018, following service as the Commission’s Executive Director from 2010-2015.  A specialist in multilateral and nonproliferation affairs, she has served in several senior positions at the U.S. Department of State, including as Special Envoy for Nuclear Nonproliferation (2008-2009); Alternate Representative for Special Political Affairs in the United Nations with the rank of Ambassador (2006-2008); U.S. Representative to the Conference on Disarmament and Special Representative of the President of the United States for the Nonproliferation of Nuclear Weapons in Geneva, Switzerland, with Rank of Ambassador (2003-2006); and Alternate Representative to the Board of Governors and General Conference of the IAEA in Vienna, Austria (2004-2005).
Ambassador Wolcott was Deputy Assistant Secretary in the Bureau of International Organization Affairs at the U.S. Department of State, Assistant to the Secretary of the Department of Veterans Affairs, Associate Director for National Security in the Office of Presidential Personnel at The White House, White House Liaison at the Department of State, and Special Assistant for Congressional Affairs, Bureau of Near Eastern and South Asian Affairs, Department of State.  She has worked as a Congressional staff member in both the House and the Senate.
For more information, please contact UNVIEPress@state.gov.