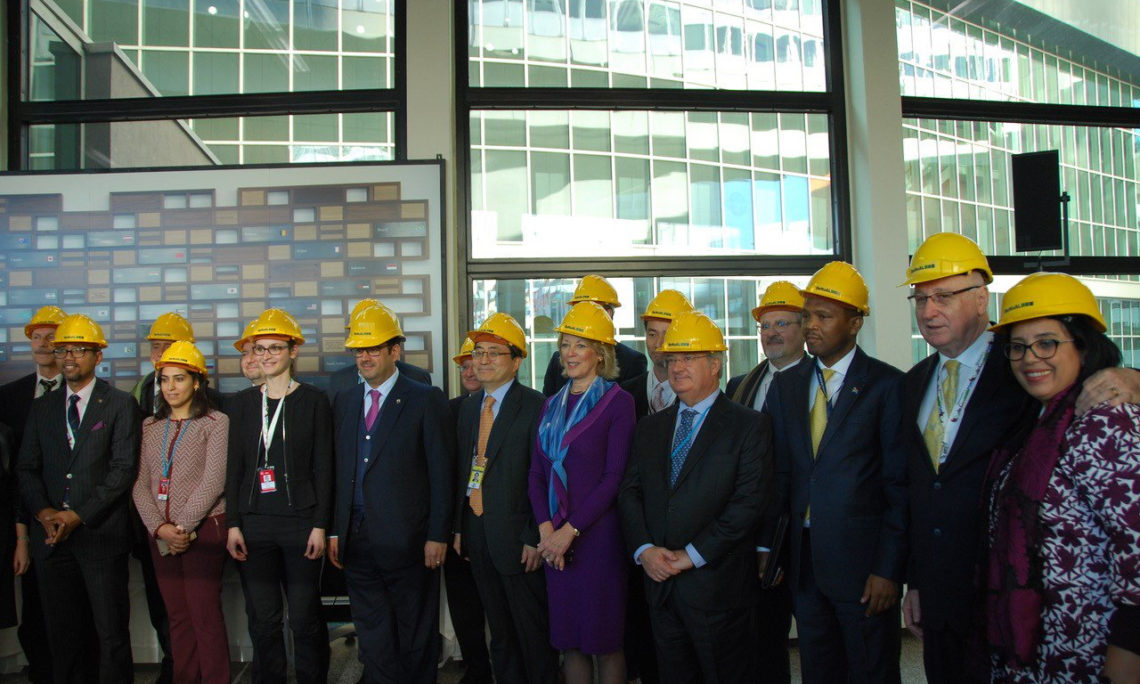 U.S. Ambassador Jackie Wolcott (center) stands with IAEA officials and representatives from other nations that have contributed to the IAEA's Renovation of the Nuclear Applications Laboratories (ReNuAL) project.

Dr. Christopher A. Ford, Assistant Secretary of State for International Security and Non-Proliferation, announced $3.18 million in new U.S. voluntary contributions to the International Atomic Energy Agency (IAEA) today at the Ministerial Conference on Nuclear Science and Technology at the IAEA Headquarters in Vienna, Austria.

The United States will contribute $1,701,210 to the IAEA’s Renovation of the Nuclear Applications Laboratories (ReNuAL) project in Seibersdorf, Austria to help the newly constructed laboratories become fully operational.  The United States will also contribute $1,474,380 through the Peaceful Uses Initiative (PUI) to allow scientists working in one of these new facilities, the Insect Pest Control Laboratory, to continue development of the Sterile Insect Technique against mosquitoes that transmit diseases, such as the Zika virus.

In his remarks, Assistant Secretary Ford noted that “sharing the benefits of nuclear technology is built upon a foundation provided by the global nonproliferation regime,” which includes the Treaty on the Non-Proliferation of Nuclear Weapons and various nuclear safeguards, safety and security practices, and export control standards.

The IAEA is conducting its first comprehensive renovation of its Nuclear Applications Laboratories since the labs opened in 1962.  The labs help IAEA Member States build critical capacities within their countries.

The Sterile Insect Technique is an environmentally friendly and sustainable method of controlling major insect pests that has been applied to various agricultural insect pests for over 50 years, and is a promising technique for suppressing populations of mosquitoes that transmit Zika.

The United States remains the single largest contributor to IAEA technical cooperation and assistance programs, having provided over $374 million in voluntary funds to the IAEA since 2010.  PUI funds contributed by the United States have supported assistance in areas such as human and animal health, food security, water resource management, the environment, nuclear safety and security, and nuclear power infrastructure development.  Over 150 IAEA Member States have benefitted from the PUI.