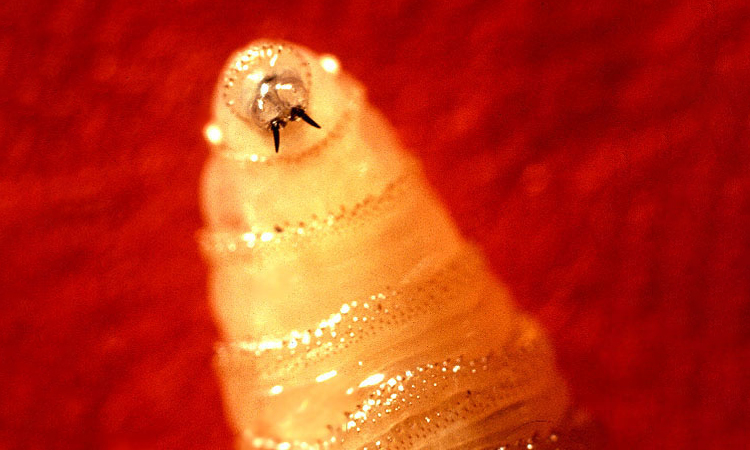 Close up of a cochliomyia, or New World Screwworm, larva. (USDA/John Kucharski)

U.S. Provides $200,000 to the IAEA to Eradicate Screwworm in Uruguay

The U.S. Department of State is allocating roughly $200,000 in funding to the International Atomic Energy Agency (IAEA) for the implementation of the sterile-insect technique (SIT) to support Uruguay’s work to eradicate the screwworm. The IAEA considers SIT to be among the most environmentally-friendly insect pest control methods ever developed.

Cochliomyia hominivorax, the New World screwworm fly (or screwworm for short), is a species of parasitic fly that is known for the way in which its larvae eat the living tissue of warm-blooded animals. The screwworm is considered one of the most harmful parasites plaguing Latin America and the Caribbean and can cause disease by laying its parasitic larvae in humans as well as animals.

Commenting on the U.S. contribution from Vienna, U.S. Ambassador to International Organizations in Vienna Jackie Wolcott said “the IAEA’s work on controlling the screwworm is just one example of how nuclear techniques can help detect, control, and prevent the spread of some of the world’s most dangerous diseases. The IAEA has also supported global efforts to fight health crises such as Zika, Ebola, and most recently COVID-19.”

In an event held in Montevideo commemorating the contribution, U.S. Ambassador to Uruguay Kenn S. George stated “the assistance demonstrates the United States’ dedication to improving access to the peaceful uses of nuclear science and technology and our commitment to Uruguay’s economic livelihood, food security, and public health.”

U.S. funding for the IAEA project will support Uruguay’s Ministry of Livestock, Agriculture, and Fisheries in the application of SIT to control screwworms affecting livestock, which is Uruguay’s main export. The Uruguayan Ministry of Agriculture estimates the screwworm costs farmers and the livestock industry in Uruguay at least $40 million per year. This is a significant impact on Uruguay’s agriculture trade, one of the cornerstones of its economy.

Through SIT, gamma rays or X-rays are used in a laboratory setting to sterilize insects that are later released into the wild to mate but will not produce offspring, leading to fewer and fewer insects with each generation. SIT does not involve transgenic (genetic engineering) processes.

The Department of State’s funding is provided to the IAEA through the Peaceful Uses Initiative, which the United States helped the IAEA establish in 2010 to promote the peaceful uses of nuclear technologies as solutions to development problems faced by countries requesting IAEA support.

In addition to promoting sustainable development, U.S. contributions to this project highlight the U.S. commitment to Article IV of the Treaty on the Non-Proliferation of Nuclear Weapons, or NPT. Article IV recognizes the inalienable right of NPT Parties to develop nuclear energy for peaceful purposes, in conformity with their non-proliferation obligations under the Treaty. Article IV also provides for international cooperation that enables states to enjoy the benefits of the peaceful uses of the atom.

More information on SIT and the IAEA’s efforts to fight infections diseases is available on IAEA’s website: https://www.iaea.org/topics/infectious-diseases