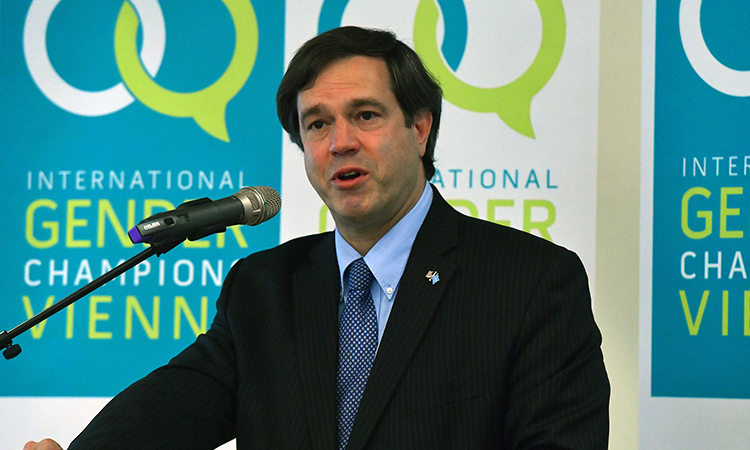 Good afternoon, everyone. I echo all the words of welcome – I am pleased to see so many attendees at the launch of this important initiative.

In addition to the heads of the Vienna-based International Organizations who are speaking here today, I would like to give a special welcome to Laura Rockwood of the Vienna Center for Disarmament and Non-Proliferation, as our pioneering NGO Gender Champion and a long-time voice for gender equality; as well as Ambassador Philip Griffiths of the Wassenaar Arrangement, who has also pledged his support.

Also I would like to thank the Australian, Costa Rican, and Slovenian missions for their contributions of food and drink for today’s reception.

International Gender Champions is certainly not the first gender equality initiative, nor will it be the last. But in the process of standing it up, it became abundantly clear to me that it is critically important. Four of the five international organization resident in the Vienna International Center are headed by men; only one is led by a woman. Yet in every planning meeting, I was greeted by a sea of female faces – women getting things done outside of the limelight.

International Gender Champions is about ensuring that women’s voices are part of the decision-making process at the highest levels. It’s about making sure women experts are invited to participate on panels even though male experts might be the first ones who come to mind. It’s about implementing work-life balance practices that allow both women and men equality of opportunity in the work place as well as time to spend time with family and friends outside of work. It’s about confronting our unconscious biases. It’s about having equality in the front of our minds in every aspect of our working day.

The expansion of the International Gender Champions initiative from New York and Geneva to Vienna was one of the top priorities of former Ambassador Laura Holgate when she arrived at Post last summer. Unfortunately she was unable to see the project through, but I am pleased to see the initiative so successfully established today – when we started accepting commitments from Champions, we had set the bar for success at 25 Champions. As I stand before you now, we have 52. And still counting.

Though we have worked hard to get to where we are today, we must not mistake today’s launch as the culmination of the efforts. It is only the beginning. Now begins the hard work of implementing our commitments, tracking our progress, raising awareness.

And for those heads of missions and organizations who have not yet committed to join the initiative we still strongly encourage you to do so.