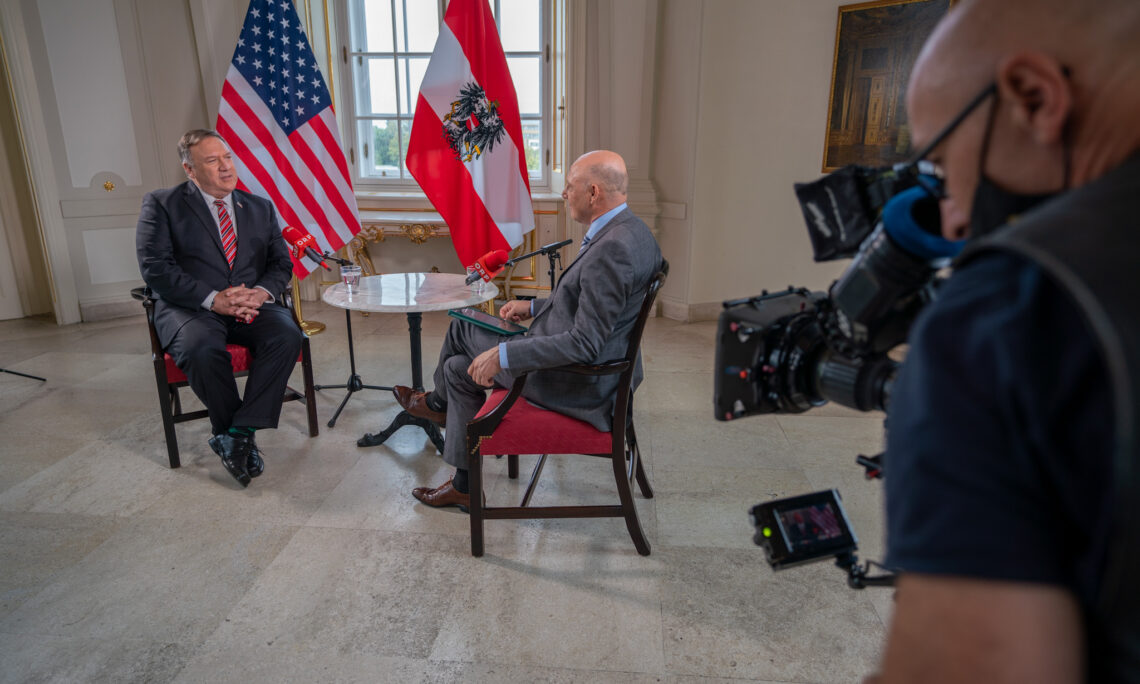 Secretary of State Mike Pompeo gives an interview to Andreas Pfeifer of ORF TV in Vienna, Austria on August 14, 2020.

QUESTION: Mr. Secretary, both countries, the U.S. and Austria, are willing to make a new deal, a new partnership. What kind of partnership could that be – there are obstacles. Austria is dealing with Huawei, is interested in a deal with Nord Stream 2, and this is all against your advice. Didn’t you convince Mr. Schallenberg?

SECRETARY POMPEO: Okay. So there’s lots of places that we – we’re likely to find ourselves disagreeing, but at the end, the core relationship, the things that we work on together, far outweigh any of these tactical differences.

Look, Austria is an important strategic partner of ours. They provide forces all over the world, right. Right after us, they’re the largest member of the peacekeeping mission in Kosovo. These are important places, important projects. We’re talking a lot about the Western Balkans. These are places where our value set way overrides any tactical difference we have on a particular policy. We’ll debate those. We’ll debate those with Austria and other members of the EU. In the end, the transatlantic alliance is enormously valuable, and Austria sits at the center and is an important partner in that.

QUESTION: So the deal with Huawei is not a problem for this relationship?

SECRETARY POMPEO: Well we think of Huawei not as a bilateral issue. We think of Huawei as presenting risk. So our mission set is just to make sure everybody understands that Huawei is a element of the Chinese Communist Party. It’s deeply connected to the military. They have access to all of the information that goes across Huawei systems. That data, Austrian people’s private data on Chinese telecommunications infrastructure, is a bad idea, we believe, for anyone. We think that includes the Austrian people who want to preserve their information. And so we urge every country to make sure that their data flows only across trusted networks. It’s what we’re working our way towards in the United States. We now have 30 countries who have joined the coalition to have Clean Networks. We hope every country will come to see – to do this not because the United States asked them to, but because it’s the right thing for their people.

QUESTION: Okay. Some experts say that you’re in troubles with Germany, the big partner, so that’s why you’re looking for new friends because the world change (inaudible) Austria. Some people say that Sebastian Kurz, our chancellor, is the better alternative to Angela Merkel. What do you say?

SECRETARY POMPEO: We have a great relationship with Austria. It has nothing to do with us trying to find a – I guess the theory would be a back door to have a relationship. That’s silly. We have a great relationship with Austria because it is an important partner. It sits right here in the heart of Europe. They’ve been great partners in so many things that we’ve done alongside them. I know they’ll continue to do it. It’s the reason I’m here today.

Austria sometimes doesn’t see itself the same way we see it. We see it as important in the geostrategic group, we see it as having real capacity to influence not only the rest of Europe but the rest of the world. We count on them to do that and I wanted to come here today to talk to them about things that matter to the American people, the things that we can work on together and – to try to find our way through those prickly issues where we don’t quite see eye to eye.

QUESTION: Okay. This is the place – Vienna is the place where the Iran nuclear deal was signed and celebrated. You left the deal and you’re going to renew the arms embargo as well. So did Mr. Schallenberg convince you that this is not the right way, maximum pressure is maybe the wrong way?

QUESTION: As every country in the world, you have to fight to deal with the corona pandemic. Some say that maybe the U.S. is suffering more than other countries because of a lack of leadership, because of late and false decisions by the Trump administration. Did anything go wrong in your country?

SECRETARY POMPEO: Yeah. This came from Wuhan, China, and the Chinese had every opportunity to act in a way that would have prevented this virus from causing hundreds of thousands of lives all across the world and trillions of dollars in economic damage. I was with a group of Austrian business leaders today. Every one of them has had their business adversely impacted; not only their bottom lines, but their ability to continue to hire Austrians and to invest around the world. This challenge falls squarely at the feet of what – they had the capacity. They knew. They stopped the travel out of Hubei Province but allowed people to continue to fly to Milan. This is how the virus got into places like Austria. It’s how it got into Europe. It’s how it got into the United States of America as well. The world needs to hold accountable those responsible for this global pandemic.

We think we have done a good job in the United States of America. We continue to work diligently to underwrite all the nations around the world who continue to need assistance. No one has provided as much humanitarian assistance as a result of COVID as the United States of America. It’s not remotely close. And we are on the cusp of having a really good set of outcomes related not only to therapeutics, but we hope with respect to the vaccine as well.

QUESTION: So no mistakes by Mr. Trump?

SECRETARY POMPEO: We think we’ve got it right.

QUESTION: Okay. So you’re a diplomat; the President is maybe not. He called, for example, the running mate of Mr. Biden, Kamala Harris, “mean” and “madwoman.” So what are we supposed to expect for the campaign until November 3rd?

SECRETARY POMPEO: Yeah. There are those who don’t think I’m much of a diplomat either, because I speak my mind as well. Look, I don’t get involved in U.S. domestic politics. I am very confident that the actions that this administration has taken for three and a half years have made the world a safer place.

You saw what happened yesterday: the announcement between the United Arab Emirates and Israel, a historic peace deal, normalization between those two. That’s the result of President Trump’s hard work. We’re proud of what we’ve accomplished in the three and half years. We’re confident the American people will make a good decision in November as well.

QUESTION: Opinion polls tell us that Mr. Biden is ahead, at least maybe.

QUESTION: Is it fake news?

SECRETARY POMPEO: It’s what they said last time, too.

QUESTION: Is it fake news?

SECRETARY POMPEO: It’s what they said last time, too.

SECRETARY POMPEO: Right about this same time, I remember where Secretary Clinton’s poll numbers were.

QUESTION: So Mr. Trump does deserve a second term?

QUESTION: Thank you very much.

SECRETARY POMPEO: Thank you very much.

QUESTION: I would add something else if it’s possible, maybe if you, if you want to mention it, between Israel and the United Arab Emirates.

QUESTION: Last night, you announced a major step in Middle East politics, the recent agreement between Israel and the United Arab Emirates. Are there more countries to follow?

SECRETARY POMPEO: We certainly hope that we can continue to work to increase Middle East stability and peace. President Trump did great work. I give great credit to Prime Minister Netanyahu and to Sheikh Mohammed bin Zayed. They did remarkable work as well, deciding that this was in the best interest of each of their two people.

We continue to work with countries all across the region. We hope there will be more to follow who will make a similar decision that recognizes Israel’s place in the world and that they’re going to be here, and that the best interest of their people is to do business with them and normalize relationships. We’ll keep working at it, and I know that there are many countries in the region who have come to understand this. I hope we have more announcements in the not-too-distant future.

SECRETARY POMPEO: It is – I can’t get ahead of it. Each of these happens on its own timeline when the time is right for their people. We hope that they will see it that way before too long.

QUESTION: Thank you so much.

SECRETARY POMPEO: Have a great day.