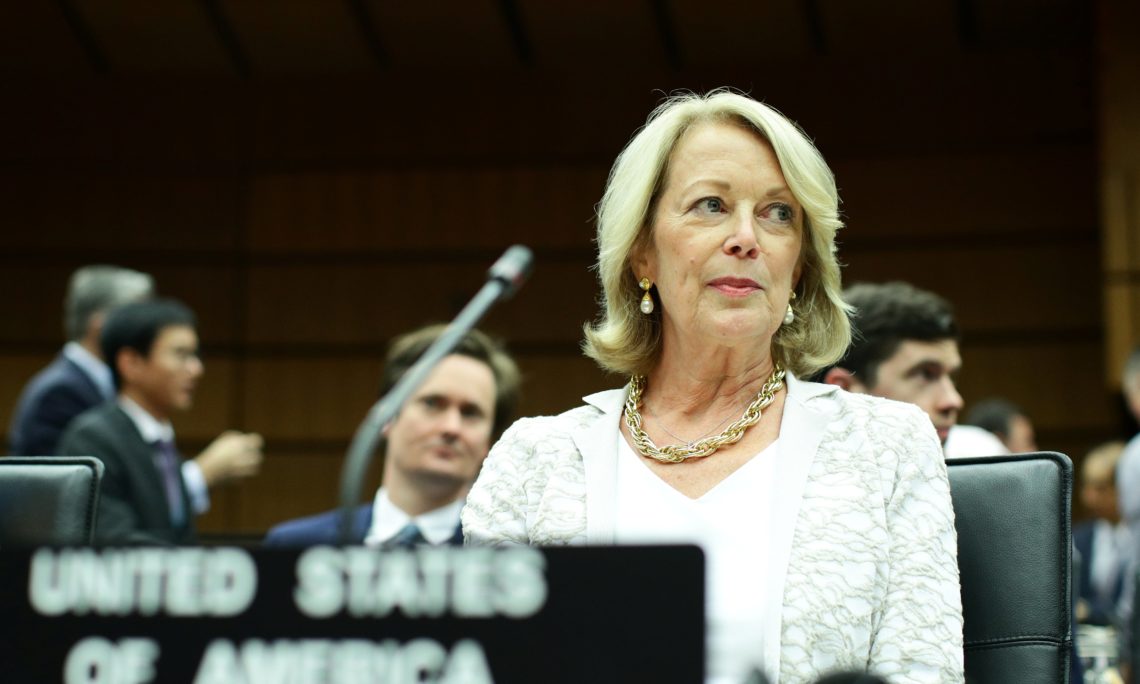 Archive photo of Ambassador Jackie Wolcott at the IAEA Board of Governors meeting, July 10, 2019. Photo by Lisa Niesner (Reuters)

U.S. Statement to the IAEA Board of Governors on Verification and Monitoring in Iran

The United States appreciates your efforts to convene this special meeting of the Board of Governors today. The United States called for this important meeting in response to the Director General’s reports, and given the seriousness of Iran’s recent actions to expand its uranium enrichment program and the proliferation risks they pose. Iran’s actions are a deliberate display of disregard for key limits the IAEA is entrusted to verify – and to which many members of this body have long made clear they believe it essential that Iran continue to adhere. Moreover, Iran continues to make concerning statements regarding further escalatory steps it may soon take to advance its proliferation-sensitive nuclear activities.

Dear Board Colleagues, — I speak to you today as a fellow Governor.

We have a shared and serious responsibility to discuss and address these critical matters, brought before us in special reports by the Director General. Iran’s reported actions not only demand the Board’s immediate attention, but also affect regional and global security and stability, and should be of great concern to all who support the IAEA and the global nuclear nonproliferation regime. As the IAEA Board of Governors, we have a profound and fundamental responsibility to address a matter so relevant to the IAEA’s essential verification role. Iran’s past pursuit of nuclear weapons – and its well-documented efforts to preserve and conceal information from its prior nuclear weaponization work – heightens the seriousness with which we and the international community should view these recent developments, and provides the historical context in which we must consider Iran’s current actions and announcements.

Iran’s recent actions and statements regarding its nuclear program are deeply concerning. Since this Board met just last month, it has received not one, but two troubling reports from the Director General, on July 1 and July 8, confirming actions Iran has now taken to expand its nuclear program and no longer perform key commitments. There is no credible reason for Iran to expand its nuclear program, and there is no way to read this as anything other than a crude and transparent attempt to extort payments from the international community. This is an interpretation the Iranian regime itself readily admits, stating openly that it will continue to engage in such provocations until it receives various economic benefits.

Following so soon after Iran’s most recent provocations in the Gulf, in the form of physical aggression against ships and aircraft, Iran’s current nuclear posture is clearly aimed at escalating tensions rather than defusing them, and underscores the serious challenges Iran continues to pose to international peace and security. Such brinkmanship and extortion tactics will neither resolve the current impasse nor bring Iran sanctions relief. The path the regime is now on will only deepen its international isolation and raise the dangers it faces.

We call on Iran to reverse its recent nuclear steps and cease any plans for further advancements in the future. The United States has made clear that we are open to negotiation without preconditions, and that we are offering Iran the possibility of a full normalization of relations. All members of this body should urge Iran to immediately engage in negotiations toward a peaceful, diplomatic resolution. We remain ready and waiting for such diplomatic engagement.

Iran should also know, however, that the only path to sanctions relief is through such negotiations, not nuclear extortion. Nuclear escalation of the kind Iran is attempting now will only deepen the pressure Iran is facing and exacerbate the crisis Iran continues to make for itself. While Iran continues to blame the United States, make no mistake: the regime’s own actions, not just in the last several weeks but over many years, have brought about this situation. We have been clear about the need for a negotiated solution that enduringly addresses the proliferation challenges presented by Iran’s nuclear program. The JCPOA did not do so, nor did it address other aspects of Iran’s destabilizing conduct. Iran’s actions in the last two weeks further underscore the need for a comprehensive deal with Iran that addresses the totality of these concerns, ends the regime’s destabilizing behaviors and sponsorship of terrorism, and fully reintegrates Iran into the international community.

Iran, on the other hand, continues to move in the opposite direction, further escalating tensions by ramping up sensitive nuclear fuel cycle activities it first pursued at the time of and in conjunction with its past nuclear weapons effort. We urge all nations to treat these issues with the seriousness they deserve, and to address the issues reported by the Director General as soon as possible.

We are committed to denying Iran the benefits it seeks from these most recent provocations. It is imperative that this misbehavior not be rewarded, for if it is, Iran’s demands and provocations will only escalate – as has happened all too often in the past. If Iran truly seeks negotiating leverage with an eye to a peaceful diplomatic resolution, it must understand that real leverage and success will not come from kilograms of uranium or dollars per barrel, but rather in Iran’s own demonstrable willingness to avoid provocations and end destabilizing behaviors. Nuclear escalation will certainly not strengthen Iran’s position, but instead lead to further isolation and pressure. The path forward remains clear: in order to end to sanctions pressure, Iran must meet our diplomacy with diplomacy, end its destabilizing actions, and take lasting steps that permanently close off any pathway to nuclear weapons.

We note with further concern that these issues merely pile on top of problems that had already begun to emerge. Even as of our last Board meeting, the Director General already was no longer able to state that Iran’s enrichment research and development is being conducted “within the limits defined in the JCPOA.” As we know, and as that report revealed last month, Iran continues to violate its commitment related to research and development of the IR-6 centrifuge. This breach was clearly a sign of things to come, and should remain of concern to all of us.

Also importantly, as Iran now expands sensitive nuclear activities, Iran must address why it secretly retained an archive of materials from its past nuclear weapons program well after the conclusion of the nuclear deal. Why did Iran seek to preserve this information and expertise, if not to keep its nuclear options open? This is a critical and increasingly pressing question given Iran’s recent actions and escalating rhetoric. We must all ask the question, why did it keep these materials? Why carefully preserve and hide away all this legacy information from a program Iran pretends it never had? Why maintain materials that could so easily facilitate a resumption of nuclear weapons work in stark violation of Iran’s solemn treaty commitments and present a grave danger to international peace and security? What else is the Iranian regime continuing to hide?

We strongly support the IAEA’s continued, careful, and independent assessment of the Iranian “nuclear archive” materials, in accordance with the IAEA’s standard safeguards practices. Given the significance and renewed urgency of concern in light of Iran’s recent actions, it is important that the Agency continue its work and act upon any credible information that raises a safeguards-relevant question or inconsistency. It is only through such action, and Iran’s full cooperation with related IAEA requests, that international confidence can be established and maintained in support of a diplomatic resolution to the international community’s concerns about Iran’s nuclear program.

We greatly appreciate the Director General’s continued, prompt reporting on Iran’s nuclear activities, including the two reports we’ve received in the past ten days, which remains essential for the Board to accurately assess Iran’s implementation of its safeguards obligations and nuclear commitments. The Board of Governors must continue following this issue closely and with concern. This Board should speak with one voice in calling Iran to return to full performance of its commitments and in supporting the nonproliferation objectives the IAEA so ably serves. We ask that the Director General continue updating the Board as appropriate, including with additional reports of any further significant developments before the regularly scheduled meeting of the Board in September.

With these comments, the United States takes note of the Director General’s reports contained in documents GOV/INF/2019/8 and GOV/INF/2019/9, and requests that both of these reports be made public.