Home Home | News & Events | Statement by Dr. Jim Green, U. S. Representative to the 61st Session of the  UN Committee on the Peaceful Uses of Outer Space on Agenda Item 6, 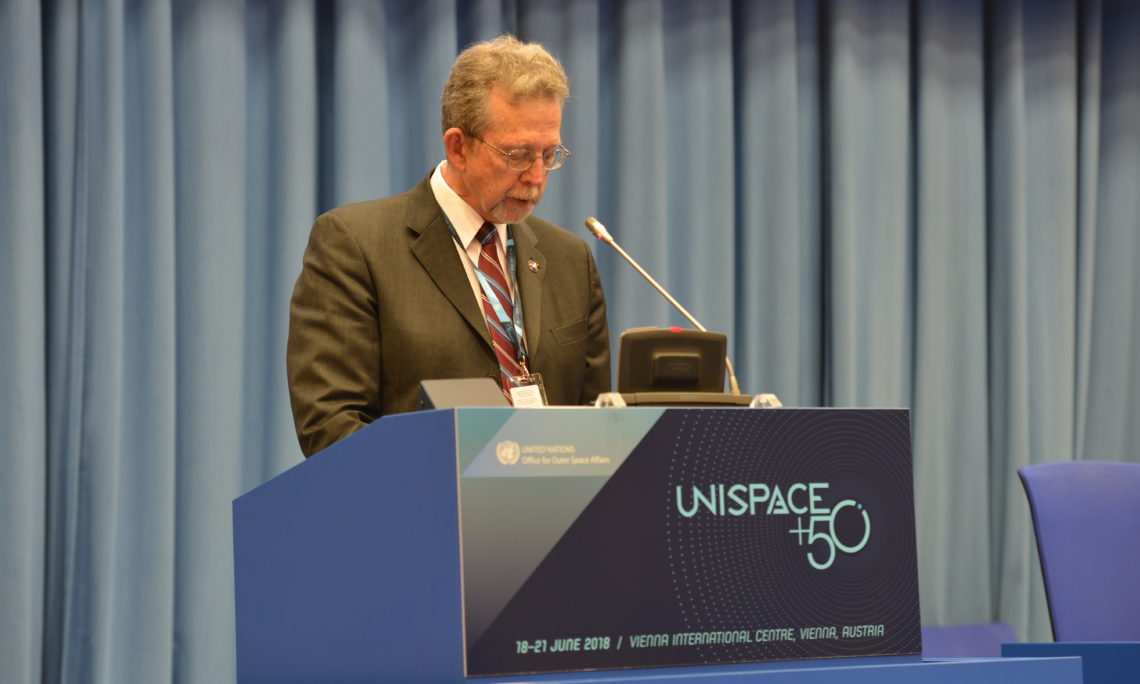 Statement by Dr. Jim Green, U. S. Representative to the 61st Session of the

UN Committee on the Peaceful Uses of Outer Space on Agenda Item 6,

Madame Chair and distinguished delegates, thank you for the opportunity to deliver our national statement on the occasion of the 50th Anniversary of the first United Nations Conference on the Exploration and Peaceful Uses of Outer Space.  It is my distinct pleasure to be here today to address the Committee.  I am proud to say that the United States is one of the original 18 Member States of this distinguished committee, and the fact that it has now grown to 87 Member States is evidence of the importance of space-based assets and activities to life on Earth.

From the beginning, NASA has been involved in the work of this committee, and the United States played an active role in the first UNISPACE conference in 1968.  This conference and the following two UNISPACE conferences elevated the importance of space within the UN system and raised awareness of the benefits of space for all humankind.  Over the years, UNCOPUOS has proven to be an effective catalyst for international cooperation in the peaceful uses of outer space.  I commend you for your continuing efforts, and the work being done by the two subcommittees, to stimulate cooperation and to assist countries who are newer users of space in creating the capacity to use space-based systems to improve the welfare of their populations.  I recognize that the work of the Committee was instrumental in the development of the international legal framework under which we all operate in space today.  Under this framework, the use of space by nations, international organizations, and private entities has flourished.

Since the last UNISPACE conference in 1999, this Committee has made significant progress to improve the safety and sustainability of space operations.  Clear examples of this are the UN COPUOS guidelines for space debris mitigation, approved by the General Assembly in 2007, and the development in 2009, with the International Atomic Energy Agency, of the Safety Framework for the Use of Nuclear Power Sources in Outer Space.  Adding space weather as an STSC agenda item assures even greater global coordination in the effort to increase our understanding of space weather and its impact on Earth and throughout our solar system.  All the work that this Committee has done to develop a set of internationally-agreed guidelines for safe and sustainable space activities only adds to the list of impressive accomplishments.

As most of you know, NASA has a long history of international cooperation.  In fact, “cooperation with other nations and groups of nations” in the peaceful exploration of space was envisioned as a key element in the legislation that created NASA back in 1958.  This principle of international cooperation has been a guiding philosophy for NASA and has never been more important than it is today.  Collaboration is essential for human exploration beyond the frontiers of low-Earth orbit, and equally so for addressing scientific challenges that are inherently global and interrelated; expanding human knowledge by answering profound questions about the Earth and the universe we live in; understanding the climate and the environment; and leveraging technology investments to push the boundaries of innovation.

Many examples of NASA’s international cooperation are well known, but perhaps the best known is the International Space Station, which will mark the twentieth anniversary of the launching of its first module this November.  Fifteen nations contributed to the development and assembly of the station, and to date, more than 100 nations have participated in some form of ISS utilization.  The ISS now serves as the world’s leading laboratory where researchers advance scientific knowledge in Earth, space, physical, and biological sciences, for the benefit of humankind.  NASA is continuing to pursue international partnerships on large programs that push the boundaries of human and robotic space exploration, such as development of the James Webb Space Telescope, the Global Precipitation Measurement mission, the Space Launch System, and the Orion crew module.  Our international partners are also an intrinsic part of planning for the programs of the future, such as our recent direction from the White House to send NASA astronauts back to the Moon, where we will establish the capacity, with international and commercial partners, to send humans to Mars.  Our return to the Moon will draw on the interests and capabilities of our industry and international partners as we develop progressively complex robotic missions to the surface of the Moon with scientific and exploration objectives in advance of human return there.  As part of NASA’s Exploration Campaign, we will begin to build the in-space infrastructure for long-term exploration of the Moon by delivering to lunar orbit a power and propulsion element as the foundation of a Lunar Orbital Platform-Gateway.  The Gateway will give us a strategic presence in lunar space that will drive our activity with commercial and international partners and help us further explore the Moon and its resources and translate that experience toward human missions to Mars.

For more than 50 years, the United States, working in partnership with UNCOPUOS and many of its Member States, has taken a leadership role in the peaceful uses of outer space.  This partnership is driven by a clear understanding that issues of global importance, such as those addressed in this Committee, call for global involvement.  Together, we have been working to share discoveries and knowledge of the universe, bring the benefits of space technology to humankind, and encourage the use of space as a tool for sustainable development here on the Earth.  Please accept the United States’ appreciation for your continuing efforts, and our commitment to work with you to achieve goals that can only be achieved by peoples of all nations working together.