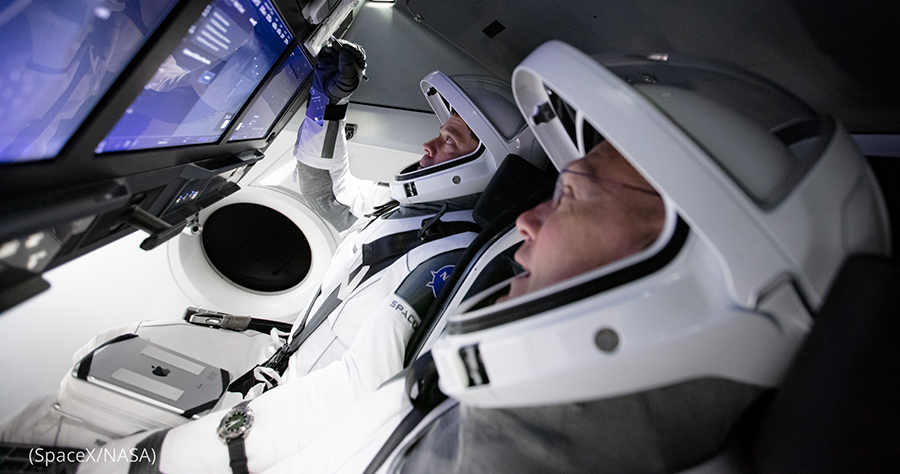 On Thursday, March 19 and Friday, March 20, SpaceX teams in Firing Room 4 at NASA's Kennedy Space Center in Florida and the company's Mission Control in Hawthorne, California, along with NASA flight controllers in Mission Control Houston, executed a full simulation of launch and docking of the Crew

A new era of human spaceflight began yesterday with the successful launch of the NASA-SpaceX Demo-2 Mission from Kennedy Space Center in Florida.

The joint public-private launch is flying NASA astronauts Robert Behnken and Douglas Hurley to the International Space Station (ISS) aboard SpaceX’s Crew Dragon spacecraft. It was also the first time American astronauts have launched on an American rocket from American soil since 2011.

Crew Dragon will be in position to rendezvous and dock with the ISS within approximately 24 hours of take-off, and Behnken and Hurley then become members of the Expedition 63 crew already on board the station.

Through its support for the development of human spaceflight capabilities, NASA is helping develop a U.S. commercial crew space transportation capable of achieving safe, reliable, and cost-effective access to and from the International Space Station and low-Earth orbit, while opening space for new commercial opportunities.

This will both catalyze and expand space exploration markets for businesses, and it will also lower the cost of access to the ISS, making important scientific and research missions by the international community more affordable.

Meanwhile, NASA continues its important research and technology investigations onboard the ISS, benefitting people on Earth and laying the groundwork for future exploration of the Moon and Mars – starting with the Artemis program, which will land the first woman and the next man on the lunar surface in 2024.

Here in Vienna, the United States is working with international partners at the Committee on the Peaceful Uses of Outer Space to address critical issues of safety and sustainability of operations in space.

The United States is leading a coalition for further exploration of the Moon, Mars, and beyond. And we are committed to working with international and commercial partners to bring the benefits of outer space back to earth.