Home Home | News & Events | U.S. on Any Other Business at the IAEA BoG, Agenda Item 7 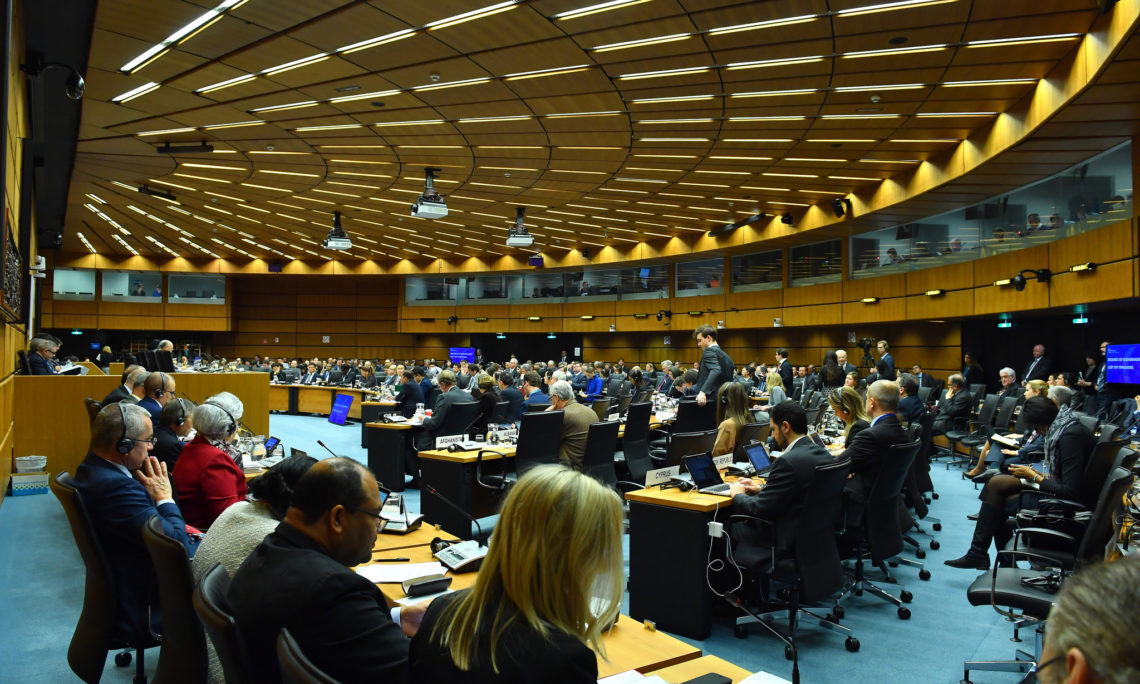 Statement under Agenda Item 7: Any Other Business

As delivered by Ambassador Jackie Wolcott at the IAEA Board of Governors Meeting
Vienna, March 6, 2019

I have several issues to cover.

The United States is pleased to welcome the Saint Lucia as the Agency’s 171st Member State. We would like to encourage Saint Lucia to take full advantage of the benefits and services associated with IAEA membership, including in the area of peaceful uses. The United States looks forward to learning more about Saint Lucia’s priorities in this area, and to working together to support these and broad regional priorities.

We also encourage the Government of Saint Lucia to seek the Secretariat’s assistance in adopting and implementing the highest standards of conduct while pursuing the safe, secure, and peaceful uses of nuclear energy. These standards include an Additional Protocol, a revised Small Quantities Protocol, and the Code of Conduct for radioactive sources. Similarly, we are confident that the Secretariat will offer whatever assistance is necessary to Saint Lucia to fully implement these standards.

The 2020 NPT Review Conference coincides with the 50th Anniversary of the NPT’s entry into force. The United States takes note of the upcoming PrepCom in New York as a critical meeting to pave the way at the 2020 Review Conference to recognize our shared interests, recall how the Treaty has helped advance those interests, and reaffirm our commitment to the Treaty’s continued success. We congratulate Malaysian Ambassador Syed Hasrin on his recent appointment as the Chair of the upcoming NPT PrepCom and look forward to working with him and all Parties to the Treaty to have constructive and productive meetings in New York.

The United States regrets that the issue of so-called “Israeli nuclear capabilities” has once again been raised in the Board, as Israel has not violated any agreements with the IAEA, and is a significant contributor to the Agency’s important technical work. We note that no other Member State is singled out for such unfounded criticism. Divisive statements aimed at disparaging a state in good standing will in no way advance our shared goal of a Middle East free of weapons of mass destruction and delivery systems, and can only further perpetuate the deep lack of trust among the regional states. We urge all regional states to refrain from politically-motivated statements and to instead engage their neighbors directly in an inclusive, cooperative manner about their regional security concerns.

The United States continues to support the goal of a Middle East free of weapons of mass destruction and delivery systems, alongside a comprehensive and durable regional peace. We regret the practical political and security realities that continue to impede progress on a zone, including: the lack of trust among the regional states; ongoing conflict and noncompliance by states in the region; the deplorable use of chemical weapons by the Assad regime and non-state actors; ballistic missile development and proliferation; and the persistent non-recognition of Israel by many regional states. The only path to progress on a WMD-free zone in the Middle East – or any other region of the world – is through direct, inclusive, and consensus-based dialogue among the regional states aimed at building trust and addressing the legitimate security concerns of all regional states. We remain convinced, however, that such dialogue must be pursued voluntarily on the basis of arrangements and modalities mutually agreed upon by the regional states, consistent with longstanding international practice.

We heard a previous speaker emphasize the importance of inclusivity. In this context, we regret that some regional states – rather than working cooperatively and in good faith with their regional neighbors to identify mutually acceptable arrangements and modalities for advancing this goal – have unfortunately sought instead to promote narrowly-focused multilateral solutions that seem aimed at isolating rather than engaging parties in the region. In this regard, the United States deeply regrets the UN General Assembly’s adoption of a decision calling for the UN Secretary General to convene a conference in 2019 to negotiate a treaty establishing a Middle East WMD-free zone. We note that this decision was adopted by the GA in a divided vote without consensus support among the regional states themselves, and that a preponderance of IAEA Member States did not support it.

We have been clear about our views on the conference. In the absence of support and participation by all the regional states, the United States will not attend the conference and will regard any potential outcome of it as fundamentally illegitimate. Given the significant difference of views among Member States regarding this initiative, we encourage the Agency to carefully consider its approach toward this conference. We encourage the regional states concerned to abandon this misguided initiative and pursue truly cooperative and inclusive approaches that can command consensus support in the region.

The United States welcomes the Director General’s report on “Agency-Wide Support to Cancer Control” as contained in document GOV/INF/2019/2. The IAEA has a significant role to play in cancer control, and IAEA assistance, when well-planned and implemented in a coordinated manner, can make a positive difference in people’s lives.

We are pleased to see that, in response to the 2017 report by the Office of Internal Oversight Services, the IAEA is taking steps to more fully coordinate its cancer-related work between the Departments of Technical Cooperation, Nuclear Applications, and Nuclear Safety and Security. The technical Departments offer substantial expertise and longstanding experience in this field, and the refocused Division of the Programme of Action for Cancer Therapy, or PACT, should complement their efforts. As a longtime supporter of PACT, the United States looks forward to learning more about the impact of this new strategy as the planned organizational changes, including the appointment of the new PACT Director and a coordinator within the DG’s office, are implemented.

The United States supports the development and implementation of a strengthened Due Account Mechanism (DAM). This would help to ensure that the Agency’s resources for TC activities are sufficient, assured, and predictable.

Improvements to the mechanism should help the Agency to collect the Board-approved target level of Technical Cooperation Fund (TCF) resources by deterring Member States from falling short in providing their TCF target shares. In addition, improvements should apply equitably to all Member States according to their ability to pay. Full, on-time payment of TCF target shares ensures that Board-approved national, regional, and interregional projects can be implemented as planned.

The United States will continue to engage in efforts to find an effective mechanism that encourages all Member States to pay their TCF shares in full and on time. During the informal Technical Assistance and Cooperation Committee meeting in January, we heard several delegations express interest in holding working-level discussions to find a path forward. We believe this could be a productive approach and we urge all Member States to help maintain the forward momentum achieved in this effort.

The United States is deeply committed to advancing oversight, ethics, and accountability through continuous support and the strengthening of independent ethics offices. The US is pleased to learn that the Agency has recently created the new position of Chief of Ethics who reports to the Director General and is tasked with raising ethical awareness in the organization and promoting a “speak-up” culture. In a time of ever-increasing scrutiny of public spending, it is critical that organizations and their employees adhere to the highest possible standards of ethics and professional behavior, and the Agency’s Staff Regulations should make it clear that the new Chief of Ethics has operational independence to fulfil his responsibilities.

Ethics Offices in international organizations serve this purpose by helping executive heads build a culture of integrity and transparency through ethics awareness and education, providing confidential ethics advice to staff, administering financial disclosure programs, and protecting whistleblowers from retaliation. We welcome Mr. Maggi’s [Alessandro Maggi, Chief of Ethics] efforts thus far to promote these functions. Although most Ethics Officers at international organizations report to the executive head, it is critical that they are operationally independent and are able to report directly to Member States through the governance process in order to effectively achieve their mission and ensure the ethical integrity of the organization.

Therefore, the United States encourages Ethics Officers to present annual reports directly to Member States to provide an unbiased presentation of information and allow Member States to ask questions. Since there is now a Chief Ethics Officer in place at the Agency, we propose that an annual ethics report be presented to the Board, as it is considered a best practice in the UN system and recommended by the UN’s Joint Inspection Unit.

In these reports, the Joint Inspection Unit concluded that an annual ethics report, and its submission to the governing body, is essential to ensure an accountable, transparent, and informed review by Member States of oversight activities at an organization. Almost all the organizations in the UN system have an ethics function, including the WHO and the Food and Agriculture Organization, present an annual ethics report to their respective governing bodies. Such a report would also allow Member States to have greater visibility into the work of the Ethics Office, including training and outreach initiatives, especially as it pertains to the prevention of harassment and retaliation.

Finally, Madam Chair, let me turn to the topic of multilingualism at the IAEA. During several recent Board meetings, colleagues speaking on behalf of various language groups have noted the importance of ensuring that important IAEA documents are accessible to practitioners on the ground. The United States agrees that translating these documents into other languages can help bridge the gap between Vienna and the field and make sure that Member States can more fully benefit from the IAEA’s work.

Today, it is my pleasure to announce that the United States will make an extrabudgetary contribution through the Peaceful Uses Initiative to enable the translation of two safety-related documents from English into French. These documents were identified by the Group of Francophone Ambassadors as high priorities for translation and we are pleased to be able to support this request.  We look forward to the publication of these two documents in the coming months.